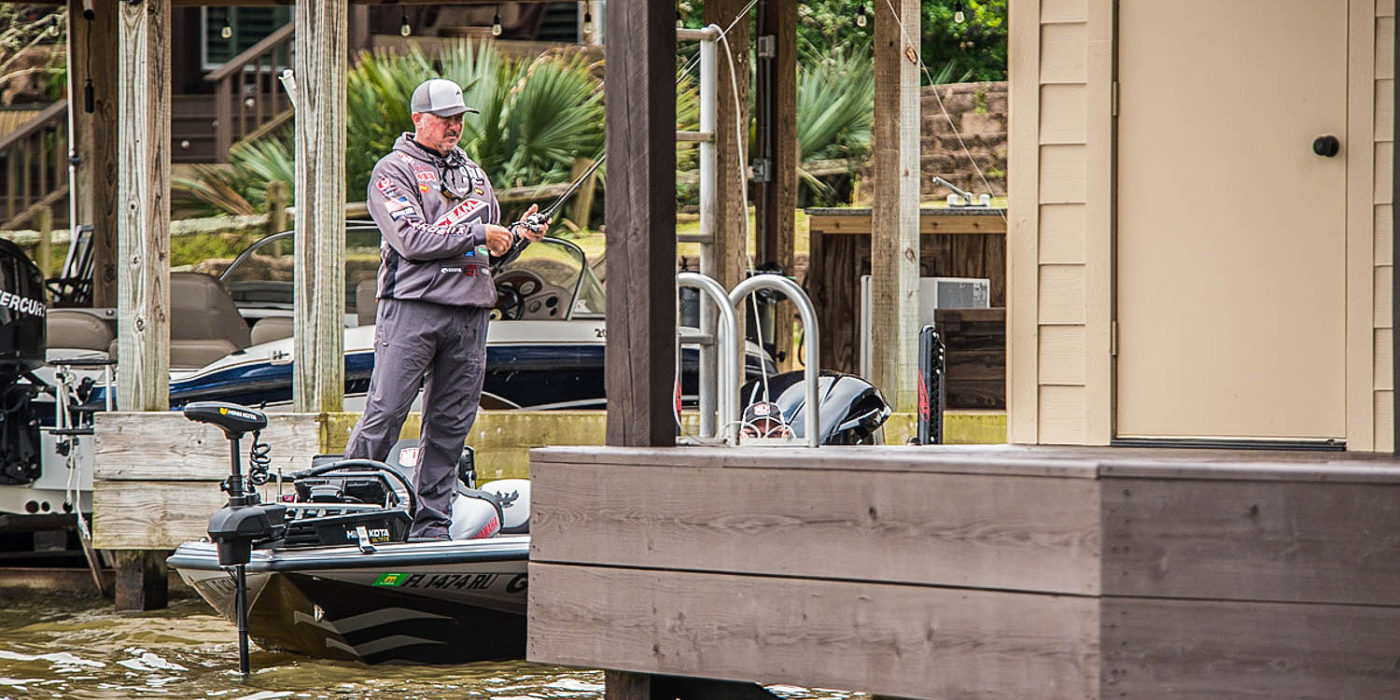 Randall Tharp is sticking with the baits, techniques and big-fish approach that got him to the Bass Pro Tour. Photo by Garrick Dixon

TULSA, Okla. — The weather changes, locations change, fish change, and for some anglers, the format has changed on the Major League Fishing Bass Pro Tour. However, an angler’s style of fishing doesn’t have to change in order to succeed in the MLF format.

Randall Tharp has proved that to be true.

The Alabama native told me in Conroe, Texas for Stage Two that he would rather catch one 5-pound fish than five 1-pounders. After a Top 10 finish in that event, don’t expect Tharp to change his style anytime soon.

“I’ve developed a system over the years that works for me,” Tharp said. “Doesn’t matter where I go in the country. For me to try and change that right now because we’re fishing a different format would just be foolish.”

Tharp has been a student of the MLF style since its beginnings on Lake Amistad. He has seen what it takes to be one of the best and it’s not always about catching the most fish, it’s about trusting yourself and how you fish.

“Looking at the history of it, the guys who seem to have the most success – Greg Hackney, Kevin VanDam, and Bobby Lane – they just do their own thing,” Tharp explained. “They have not changed their style to fit MLF and that’s why they are the most successful.”

Through two Stages, Tharp has gone home with a paycheck at both events thanks to a 27th-place finish in Kissimmee and a seventh-place finish in Conroe. While he is confident in his style and how he can prosper in the MLF format, he notices other anglers on the water who are not as comfortable as he is.

“I see a lot of guys practicing different and fishing different because the format is different,” Tharp observed. “Looking at those guys, they are the ones that are missing the cuts right now.”

So what exactly is that technique that Tharp continues to execute? It’s flipping for big fish whenever he gets a chance. Ask him what he can’t hit the water without and he will give you a straight answer.

“I always have to have a flipping stick out,” Tharp detailed. “I love fishing shallow, that’s really my comfort zone. I love running the bank, looking and fishing what’s in front of me, and fishing visible targets. Anytime I can do that I feel really good.”

His go-to bait is a 1/2-ounce jig with a Zoom Big Salty Chunk, a lure that he turns to time and time again during tournaments.

“I’ve caught more fish and won more money on that particular lure than any other in my career,” Tharp explained. “A lot of the big fish I caught in Conroe were on that exact bait.”

The Thrill of MLF

Tharp is no stranger to the thrill of winning. The long-time pro has racked up 11 wins in his career, including the Forest Wood Cup in 2013. He has experienced highs and low during his time as a professional angler, but he says nothing holds a candle to his MLF experience so far.

“The new format does not compare to anything that I’ve done before,” Tharp said. “It has exceeded my expectations. The intensity, the excitement and the emotions that you get during the seven-and-a-half hours we compete is unlike anything I’ve felt before.”

He has already locked up a spot in the 2020 Challenge Cup thanks to earning the ninth-most points during the first two Stages of the Bass Pro Tour. With a month and a half between the end of Stage Two and the beginning of Stage Three, Tharp says he is ready to return to the water and compete.

“I’m ready to get back to the rest of our schedule,” Tharp said anxiously. “I’ve got a solid start to try and get to the Redcrest at the end of the season and I hope I can qualify for all four cup events. That would be a pretty awesome year.”

Lintner, Monroe Rebound to Make Knockout Round After Subpar Starts