Growing Up Iaconelli: The Apple Doesn’t Fall Far from the Tree 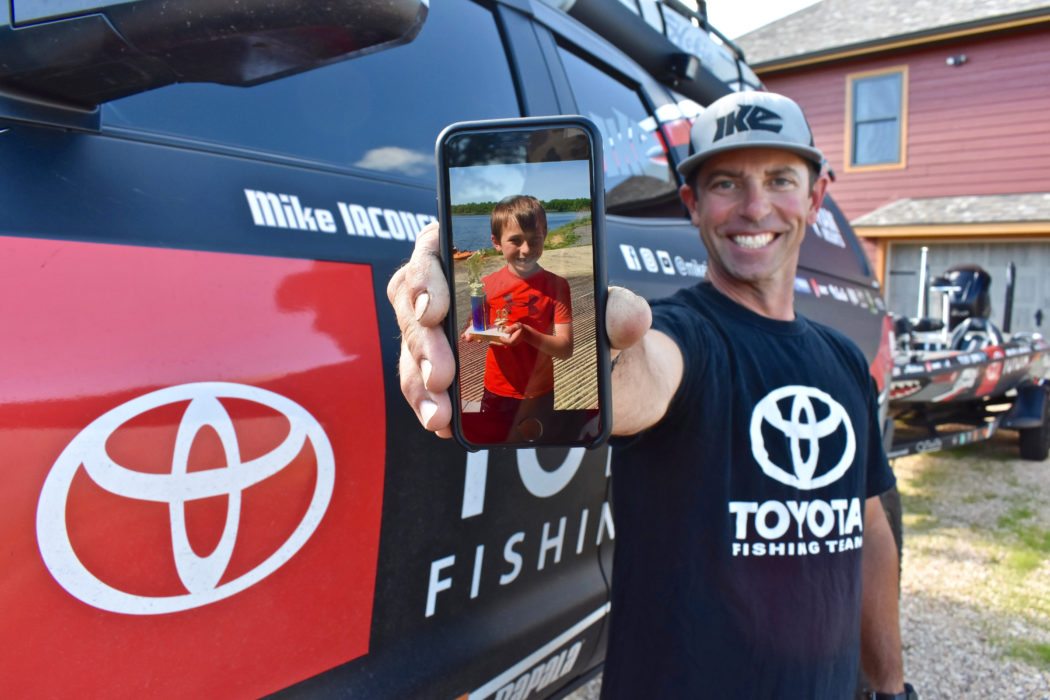 Getting kids fishing is one of the things Team Toyota pro Mike Iaconelli is most passionate about in life. If you’ve ever seen (or heard) Ike fish, you already know about his own untamable excitement for fishing, which spills over when it comes to getting youngsters involved in the sport.

Unsurprisingly, Iaconelli’s children have absorbed his enthusiasm for the outdoors.

Earlier this month, Mike’s son Vegas Iaconelli fished in his very first tournament at the age of 8 years old. Mike was competing on Table Rock Lake for Stage Six of the Bass Pro Tour, so bass fishing super wife, Becky Iaconelli, had her very first boat captain experience. To put the icing on the cake, Vegas caught two bass and finished in second place with his mom cheering him on.

If that doesn’t make you smile, you might be in the wrong place.

Vegas competed in a New Jersey BASS Nation Youth Tournament, which was held on small Assunpink Lake. This particular event was a “paper tournament”, which means the fish were measured on an official bump board, photographed, and released immediately. For safety, boats could be powered by trolling motor only and the Iaconellis were proud to say they believe they had the smallest boat in the tournament!

Vegas fished out of Mike’s very first boat, a 12-foot Coleman Crawdad Jon boat which is no less than 30 years old. That little Jon boat holds a lot of memories for Mike, as it was his first fishing boat and he’s had it since he was 18.

Mike recently rebuilt the vessel for Vegas to fish out of. The old Jon boat is now equipped with everything an angler could need. Working livewells, a Lowrance unit, extra storage compartments, a HydroWave, and a special two trolling motor system. The trolling motors came in handy, as Becky thinks they were the fastest boat on the water, along with being the smallest.

Vegas already loved fishing before this tournament, thanks largely to the support of his parents and spending days on the water with his dad. But Vegas is officially “hooked” on tournament fishing after his first competition.

“I caught one on a ribbontail (worm) and one on a Berkley General,” Vegas “the Hammer” shared. “It was tough fishing but I had a really good time. It was awesome to have my mom in the boat with me the whole time… she helped a lot!”

Becky was the first to admit that Mike is typically the one who takes the kids fishing whenever they want to go, as there is never a shortage of household tasks or work for their many side projects to check off the “to-do” list. So it took Vegas a little while to get used to listening to Mom’s input. While Becky may not fish regularly anymore, don’t think for a minute she doesn’t know a thing or two about bass fishing.

“He had to fish extremely slow, which isn’t the easiest thing for an 8-year-old to do,” Becky joked. “It was tough, post-spawn fishing. I was using snacks and music to incentivize patience, cause he was only getting bites when he would let his worm sit still. I’d tell him, ‘Okay we’ll reel in the Senko after this song gets over.’ He did such a great job!”

Each time they caught a fish, Vegas and Becky would FaceTime Mike, who was out on Lake Taneycomo with a few sponsors during his day off from Major League Fishing competition. So Mike was able to “be in the boat” for Vegas’s big catches and all was right in the world. Plain and simply, it was a special day.

“It was such an awesome deal,” Mike Iaconelli proudly beamed. “Of course I would have loved to be there, but having Becky in the boat might have been even better: 6:45 a.m. to 2:45 p.m. is a long day for an 8-year-old and Becky definitely has more patience than I do. And I’m sure I would have been freaking out every time he hooked up. I couldn’t be more proud of them.”

The Ike Foundation at Work

The Iaconelli’s manage The Ike Foundation and get youths involved in fishing and the outdoors all over the country, especially in urban settings where opportunities aren’t readily available. Mike also helped start The Bass University. I can say from experience the classes typically have a plethora of avid high school and college anglers attend.

While Ike’s antics on the water can sometimes seem a bit polarizing, his work off the water is worthy of admiration. Iaconelli’s passion for fishing and eagerness to get the youth involved is unparalleled. And, obviously, it’s working! Who knows, maybe in another 15 years we’ll have another Iaconelli breakdancing on the front deck of a bass boat while growing the sport in the process.