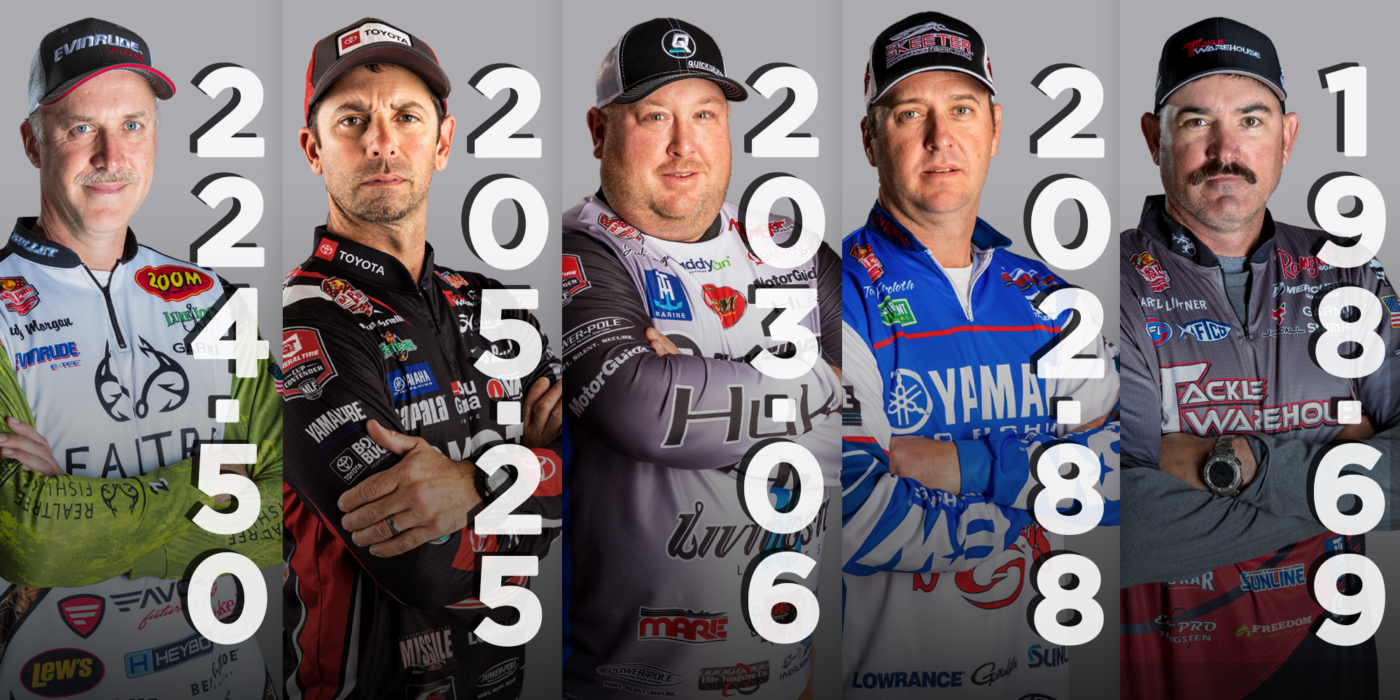 DAYTON, Tenn. – On the final day of competition at the MLF Bass Pro Tour Stage Four event in the small Smoky Mountains town of Dayton, Tennessee, MLF NOW! live stream play-by-play announcer Chad McKee vocalized a landmark moment in the sport of competitive bass fishing: The moment when the productivity of a fishery and the fish-catching ability of the field was gauged in tons, not pounds and ounces.

“This field has caught over 3 ½ tons of Tennessee River bass,” McKee marveled as he, JT Kenney and Marty Stone analyzed the week’s competition. “Wow!”

Wow indeed. When all was said and done – after Dayton native Andy Morgan claimed the champion’s trophy with a 34-fish, 80-pound domination on the final day – it began to sink in just how prolific the Lake Chickamauga bass fishery is, and just how adept at catching fish the 80-man Bass Pro Tour field is.

“These guys caught over 7,000 pounds of bass – seven thousand!” Kenney said when the final total (7,415 pounds, 9 ounces) was calculated. “That sounds like a lot of weight because it is. We’ve never had a number like that to try to analyze in professional bass fishing, so it’s a little hard to wrap your brain around. But I’ll put it in simple terms: they caught the fire out of ‘em.”

Chickamauga’s big-fish productivity is lauded the world-round, and for good reason: the fishery has produced the biggest fish in Tennessee history (15-3), and has hosted several tour-level events that have kicked out some impressive weights. But it’s never been showcased during the spawn, and it’s never seen such a “hammer”-heavy field.

“That’s Lake Chickamauga in April,” Morgan said. “If I could only fish this lake one month a year, it’d be April, and now you know why. Having all 80 of these hammers on this fishery in April, I knew it was going to be a horse race. And it darn sure was.”

Morgan’s Heavyweight March to the Title

Morgan came into the event as a favorite, and for good reason. The 23-year pro grew up fishing Chickamauga, and posted multiple Top 10s in tour-level events held here. But after a disappointing Shotgun Round performance that only netted the Favorite Fishing pro 31-8, Morgan put the pedal to the metal.

In the next two rounds, Morgan racked up 56-13 and 56-3 to advance to the Championship Round. And the three-time FLW Tour Angler of the Year blew the doors off of that final day, racking up 34 fish for 80-0 and winning by nearly 20 pounds.

“Andy Morgan just beat the brakes off of us on Championship Sunday,” admitted second-place finisher Jared Lintner, who put up heavyweight numbers of his own for the week (just over 198 pounds, including the biggest fish of the week, an 8-10).

Even though he finished outside of the Top 10, Zack Birge racked up the most impressive two-day Elimination total to date in Bass Pro Tour competition. The Oklahoma pro finished the Group B Elimination Round with 105-6 (catching 51-4 in his Shotgun Round and 54-2 in the Elimination Round) to become the first angler to eclipse the century mark in the four stages contested so far in 2019.

“One hundred pounds is kind of a badge of honor, it’s a big number,” Birge said. “I wasn’t thinking too much about it until late in the day (on Day 2) when I got up over 90, but then I started wanting (100 pounds) real bad. I was pretty happy to be the first guy to break 100 – being first at anything is pretty tough with this group.”

Back in January, the day before his first Bass Pro Tour competition day on the Kissimmee Chain in Florida, Morgan was asked the question: “What’s a good weight for this format?” After thinking for a few seconds, Morgan answered with a question of his own: “I don’t know, what do you think? Forty pounds? Fifty? Seventy?”

Lacking a full season of competition, that question has yet to be fully answered, but the 50-pound mark has emerged as a standard of excellence through the first four stagers. And on Lake Chickamauga, there was an astounding number of excellent fishing days: 29 angler-days of 50 pounds or more were recorded on SCORETRACKER, including 10 over 60.