How the Rest of the Top 10 Caught ‘Em at REDCREST 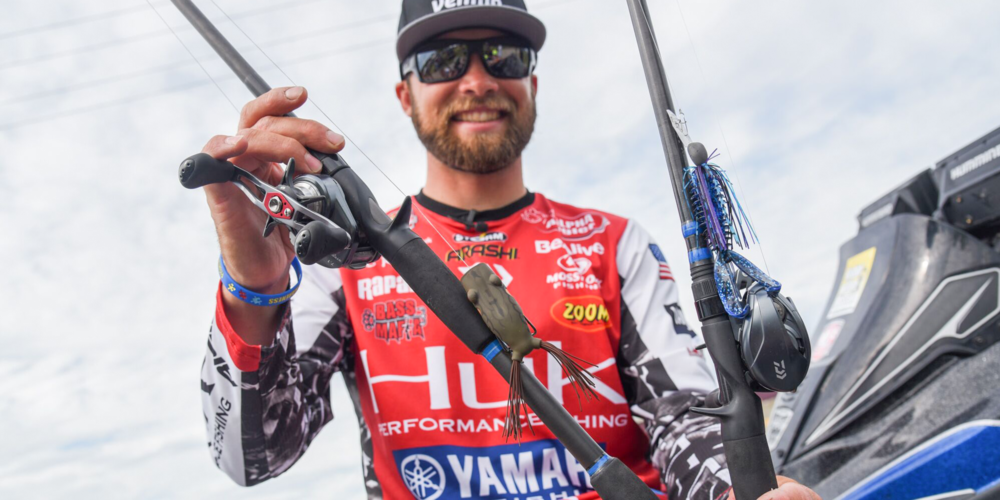 The anglers competing in the final day at REDCREST caught fish on a variety of baits throughout their rounds of competition. Photo by Garrick Dixon
August 30, 2019 • Dave Landahl • Bass Pro Tour

La Crosse, Wisconsin and the Upper Mississippi River proved to be a terrific showcase of the bass fishing prowess for the anglers who made it to the final day of the MLF Bass Pro Tour’s inaugural championship, REDCREST. Even though Edwin Evers ran away from the pack in the final round, the anglers who made the Top 10 put on an epic weeklong fish-catching show and caught fish in a variety of ways, some very surprising for this stretch of the Mississippi River.

We already shared Evers key baits in his REDCREST run, but here’s how the rest of the final-day-field caught their fish:

During qualifying rounds, Hackney caught all of his fish on offshore hard spots, some as deep as 12 to 14 feet, and some as shallow as 3 feet deep. He fished backwaters off the main river that had an abundance of shad in the area.

During the Championship Round, he used a 3/8-ounce Strike King Hack Attack Heavy Cover swim jig in either white or black and blue, paired with a matching Strike King Rage Tail Craw. A 3/8-ounce Hack Attack Select buzzbait with a Strike King Gurgle Toad in pearl was his other option.

“I fished current seams in a huge grass flat with the swim jig and current breaks on islands with the buzzbait,” Hackney said. “I used Lew’s Super Duty reel 7:1.1 gear ratio for both techniques. For the swim jig, I used 50-pound Gamma braid. For the buzzbait, I used 20-pound Gamma Edge fluorocarbon. I used my signature series Lew’s Hack Attack buzzbait/spinnerbait rod and the swim jig/frog rod.”

Vinson took a different approach than most during the qualifying rounds. No frogs or flipping for him.

“On Pool 8, I figured out a little something on the first day of practice: fishing a jerkbait over the top of and outside of grass,” Vinson said. “It’s definitely an outside-the-norm thing on the Upper Mississippi. I fished a 110-style white jerkbait, and the key was fishing it on 15-pound Seaguar Tatsu line to help keep the bait up in the water. Most of my bites were in about 3 feet of water.”

Vinson says that the jerkbait drew the fish up out of the grass. When other anglers would go by, he did his best to keep that bait out of sight so they couldn’t see what I was doing.

“During the Championship Round, I caught a few on the jerkbait, and several with a white 4-inch walking style topwater fished on 40-pound Seaguar Smackdown braid,” Vinson said. “I also had some success fishing a 1/8-ounce shaky head jig and a 4-inch black stick bait along current breaks by the wing dams.”

Birge kept it simple, catching all his bass on a Deps Buster K Frog in red, and flipping a Googan Baits Lunker Log in green pumpkin.

For bass suspended around deep docks and barges, Iaconelli used a small, shad-color Rapala RipStop jerkbait, and a 3-inch Berkley Powerbait Ripple Shad finesse swimbait on a 1/4-ounce VMC Jig Head. In the afternoon, Iaconelli would move up onto shallow milfoil grass flats and use a small Rapala Skitter POP with a 1/8-ounce Black Molix Lover Mini buzzbait.

“During the finals, I basically caught all of my fish flipping wood in creeks that had a slight current flow,” Iaconelli said. “I flipped a 1/2-ounce black and blue Missile Mini Flip Jig with a matching black and blue 3-inch Berkley Powerbait Chigger Craw. Of course, all of the baits above were fished on Abu Garcia Ike Series rods and Revo Ike reels.”

“To make it to the finals, my key bait was a Lucky Craft Gunfish 95 with round bend Gamakatsu trebles,” Ehrler said. “I also mixed in some Neko fish with the Yamamoto-made Daiwa Neko Worm with a Gamakatsu Stinger hook. During the Championship Round, it was a mix of everything: a Jack Hammer ChatterBait, a Lucky Craft 1.5, a Boss swim jig, and a Yamamoto Flappin’ Hog with an Eagle Claw tungsten weight.”

Powroznik used three baits at REDCREST: a frog, a Livingston Primetyme SQ 2.0 crankbait in the Ginrin color, and a V&M Flat Tip Worm.

“I threw the frog around duckweed and fished the crankbait on wood,” Powroznik said. “The worm was awesome around wood and undercut banks.”

“I stayed in one main area and made laps fishing a frog around eelgrass and pads,” Palaniuk said. “The other baits I rotated on isolated offshore structure in 2 to 4 feet of water that I would see on my Humminbird 360.”

For the Championship Round, Palaniuk used a 1/2-ounce black-and-blue bladed jig with Zoom Z Craw in Black Sapphire and the same frog he tossed in Pool 8.

“I targeted grass transitions and ditches with milfoil with the bladed jig and threw the frog around duckweed mats.”

Neal had three techniques he used throughout the event.

Next up was a 3.5-inch Big Bite Bait Tour Tube in Green Pumpkin Orange with a 3/0 Gamakatsu EWG SuperLine hook and a 3/8-ounce tungsten weight, all fished on 20-pound Sunline Shooter line with a Denali Lithium 7-6 XH rod and a Daiwa Tatula 100 reel.

His frog of choice was a SPRO Bronzeye Frog 65 in Rainforest Black on 60-pound Sunline FX2 braid using a Denali Kovert 7-2 heavy rod and a Daiwa Tatula CT reel.