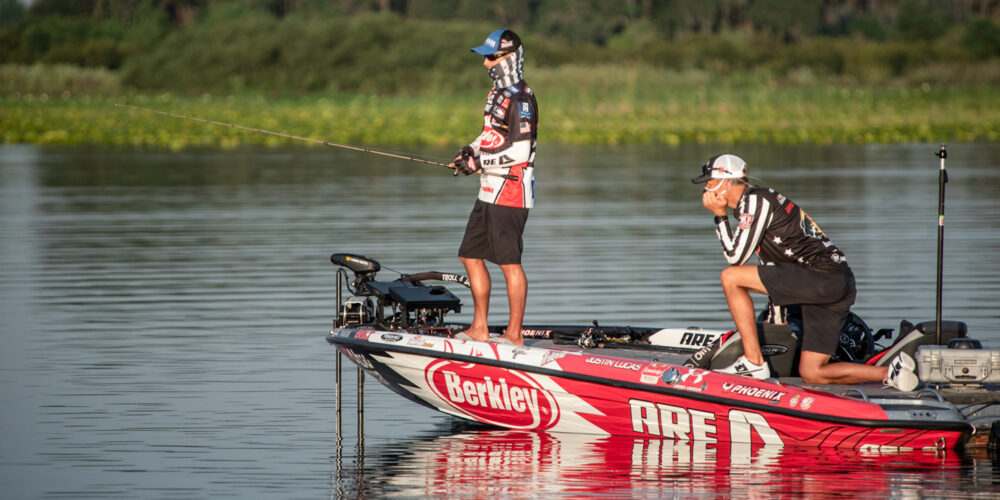 Justin Lucas has been one of a handful of Top 10 anglers fishing current on the Kissimmee Chain. Photo by Garrick Dixon
June 12, 2020 • Tyler Brinks • Bass Pro Tour

KISSIMMEE, Fla. – It’s the start of summertime in Florida for the Toyota Heavy Hitters Presented by Venmo. The Top 10 anglers have shown that there’s a variety of ways to catch bass on the Kissimmee Chain of Lakes this time of year.

From shallow cranking in current, fishing brushpiles, to utilizing finesse worms on spinning gear, there have been some non-traditional Florida methods used to make the Championship Round. Other anglers are relying on standard Florida fares such as fishing offshore hydrilla.

Here’s a rundown of how some of the Top 10 have been catching their fish. It’s an even split, with five anglers relying on current for bites and the remaining five plying offshore cover.

Both Skeet Reese and Zack Birge dominated their groups and skipped directly to the Championship Round. They employed similar approaches, albeit in different locations.

Each is targeting shallow bass in current mainly with a squarebill crankbait.

“My bread and butter has been targeting any inflow of water: pipes, or where creeks are dumping into a canal,” said Birge who noted that the majority of his fish have come in a 1.5 size squarebill.”

He’s also fooled a handful of bass with a frog and various topwater lures.

Reese is also fishing a squarebill in moving water. His choice is a Lucky Craft 1.5 Silent in Copper Green Shad that he says is a great bluegill imitator.

Another member of the current crew, who finished fourth in the Knockout Round, is Adrian Avena. He’s fishing the same area as Reese and it will be interesting to see how they each do while sharing water.

Avena utilized a squarebill in chartreuse with black back, but he also caught several bass on a black and blue Berkley Pit Boss pitching to shallow cover.

Dustin Connell is also targeting bass relating to current and caught fish on both a Googan Baits Bandito Bug and a prototype soft jerkbait.

The remaining five anglers are all targeting offshore fish relating to either brushpiles or hydrilla.

Knockout Round winner Mark Rose has been employing spinning gear with a Strike King finesse worm. Even with his light line, he’s landed several impressive bass, including the biggest bass of the week so far, his 9-pound, 2-ounce giant from Tuesday’s Qualifying Round. He also landed a 7-pound, 15-ounce fish in the Knockout Round as he lapped the field with 52-5.

Jordan Lee has mixed it up with both a crankbait and worm, rigged on a Texas rig and Carolina rig. Specifically, he’s using a 2.5 size squarebill and an 8-inch Berkley PowerBait MaxScent Kingtail Worm in the Plum Apple color. He’s using a 3/8-ounce weight for his Texas rig and 1/2-ounce for his Carolina rig.

North Carolina’s Bryan Thrift is also plying offshore brushpiles and grass with a variety of lures. As is Jacob Wheeler, who is always a threat when he makes a Championship Round.

Gary Klein got this far mainly with bass caught on a Berkley Warpig lipless crankbait.

So who’s going to win? The offshore guys or those keying on current-related bass? We’ll know by 3 p.m. EDT.