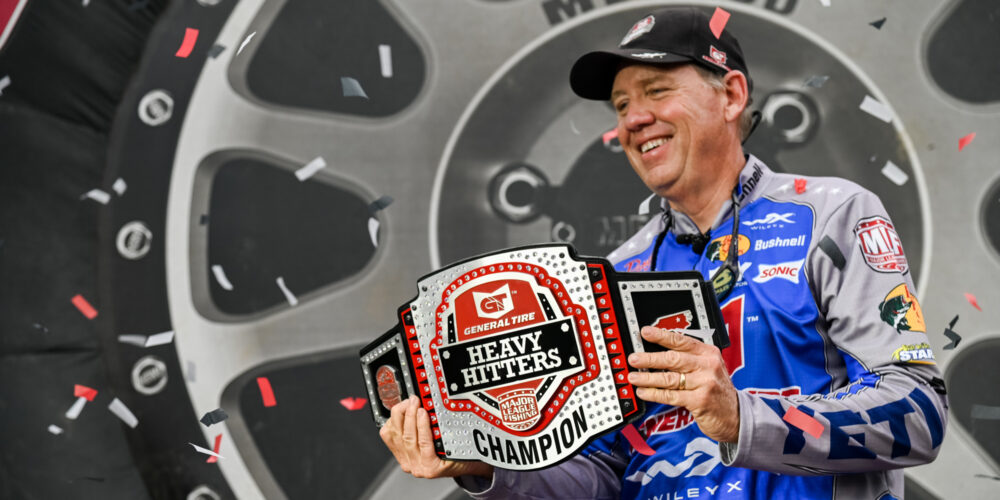 RALEIGH, N.C. – Alton Jones is the winner of General Tire Heavy Hitters Presented by Bass Pro Shops after a dominating performance on Shearon Harris Reservoir to end a memorable week outside of Raleigh, North Carolina. The win was Jones’ first win on the Bass Pro Tour and the seventh tour-level win of his career.

Jones wasn’t the only Texas pro to take home $100,000 during the Championship Round. Fellow Texan Jeff Sprague finished second to Jones on SCORETRACKER®, but also caught a 5-pound, 3-ounce largemouth that earned him $100,000 for the biggest bass caught in the Championship Round. Sprague was able to edge out Jones by just 3 ounces for Berkley Big Bass honors.

Jones Was In the Championship Zone

Alton Jones’ son, Alton Jones Jr., tweeted earlier Wednesday morning that if the Championship Round of Heavy Hitters turned into a sight-fishing derby, his money was on his old man. Junior’s faith in his father’s sight-fishing ability proved to be prophetic as Senior separated himself from the other nine anglers decisively.

Jones beat out Sprague by 15-5 and was the only angler in the Championship Round to register more than 10 bass to SCORETRACKER®. That even more impressive considering the scorable bass weight threshold was raised to 3 pounds for the final round.

The Bass Force pro knew he had the win locked up for much of the final hour. When his MLF official gave him the good news, Jones was overcome with emotion.

“This feels so good and I’m so grateful,” Jones said through tears moments after being named the winner. “It’s been a long time since I’ve won an event. I’ve always said the three most important things in bass fishing are: location, location and location. That was absolutely the key for me today. You can be doing the right thing in the wrong place and not catch them.”

The Garmin pro’s location was one that he found during his lone practice day on Shearon Harris. It was an area that he knew he was going to have to sight fish with a Texas-rigged tube.

“I knew in practice I found several areas that were going to be productive,” Jones said. “The place that I did my damage in today was where I started Tuesday morning and I didn’t even catch a fish there. I pulled in there today and there was a fish spawning every 20 feet. I was blessed with some really good fish.”

For the seventh time in his Bass Pro Tour career, Sprague ended his event with a Top-10 finish. However, this runner-up result may not sting as much as the others because Sprague is taking home $100,000 for catching the biggest bass of the Championship Round.

While it wasn’t the heaviest bass caught in the event, Sprague’s 5-3 largemouth didn’t come easy. It was a difficult day of sight fishing on Shearon Harris, and Sprague had to make his lone opportunity at a big bite count.

“I really didn’t find that fish, I was just running new water and happened to run into it,” Sprague recalled. “I was blind-casting a Strike King Ocho with a 3/16-ounce weight while keeping my eyes peeled for spawners. I threw out in front of me and saw my bait swim off. I set the hook, got it in the boat and felt really good about it. I had no clue it would hold up for the rest of the day, though.”

Sprague can now add a Heavy Hitters trophy to his mantle to go along with his 2020 Challenge Cup trophy. Once the initial excitement for winning $100,000 passed, the Strike King pro took a moment to thank all of the people that made this opportunity possible for him.

“My son, my daughter, my girlfriend and my family sacrifice so much for me to be out here,” Sprague said. “We fish so hard, we travel so much, and then things like this happen that make it all worth it. It’s been an amazing day and an amazing week and I’m honestly just so thankful.”

The entire Bass Pro Tour roster returns for Berkley Stage Two Presented by Mercury on Lake Travis in Austin, Texas. Eighty anglers will battle for six days of competition on Lake Travis as they try to be the lone champion. Stage Two begins on April 30 and ends May 5.