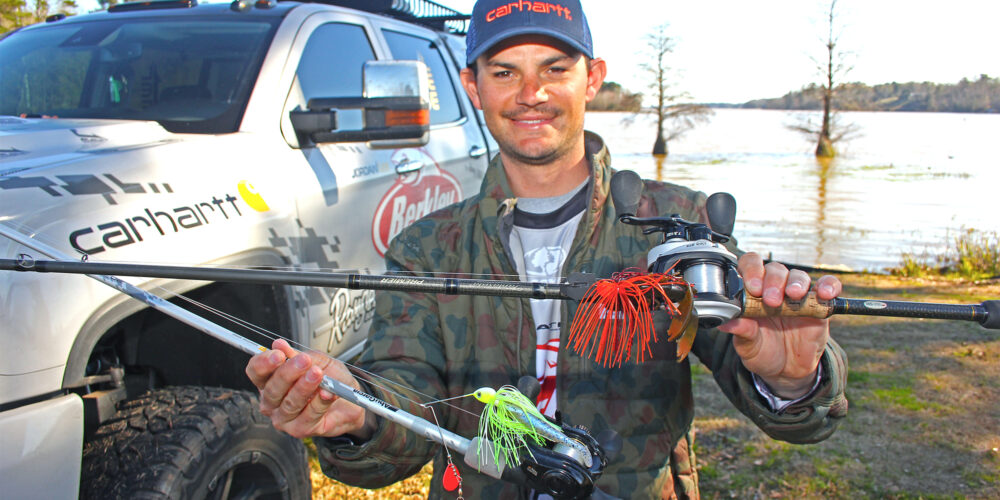 Let’s be perfectly clear, Jordan Lee has never been to cosmetology school. But when the largemouth he catches in early spring appear to have lipstick on their mandibles, he knows exactly what color of lure to throw, and few work better than a vibrating jig or a spinnerbait.

“It seems like a lot of the bass you catch in early spring have those red lips either from digging for crawdads in the rocks or just munching on a lot of red-colored crawfish, I’m not sure which, but they sure seem to like lures with red and orange on them,” the Carhartt pro says.

With water temps often in the high 40s or low 50s, many anglers are prone to fish really slow but Lee advises to keep covering water at a steady pace near obvious spawning flats very near to deep water access like a major creek channel.

“I tend to reach for the Colorado bladed spinnerbait with the orange/red kicker blade anytime the water is pretty dirty and still in the high 40s,” Lee says. “With the #5 Hildebrandt blade I put on there, it’s got a ton of resistance to let you really slow down and keep it in the strike zone longer.”

As water temps warm a notch into the 50s, few lures rival a vibrating jig often referred to as a ChatterBait. And few anglers will ever have a day that rivals the six bass totaling 36 pounds Lee caught in an MLF event on Lake Eufaula, Alabama in February 2020 with a vibrating jig. Two of those bass were 8-pounders.

“The bait I’ve got tied on in this photo is the exact bait I caught that insane bag on. A vibrating jig is just a straight-up fish-catcher in the prespawn, and it’s literally my favorite prespawn bait on the planet,” Lee says.

He throws it on a 7.3:1 Abu Garcia Revo STX reel spooled with 17-pound Berkley 100% fluorocarbon.

Look close though at the Chigger Craw trailer he dresses the vibrating jig with. Yup, you got it, Lee takes an extra minute to dye the pinchers orange. Doing everything possible to make his springtime lures look a little more like crawdads – sort of like a cosmetologist of bass fishing lures.