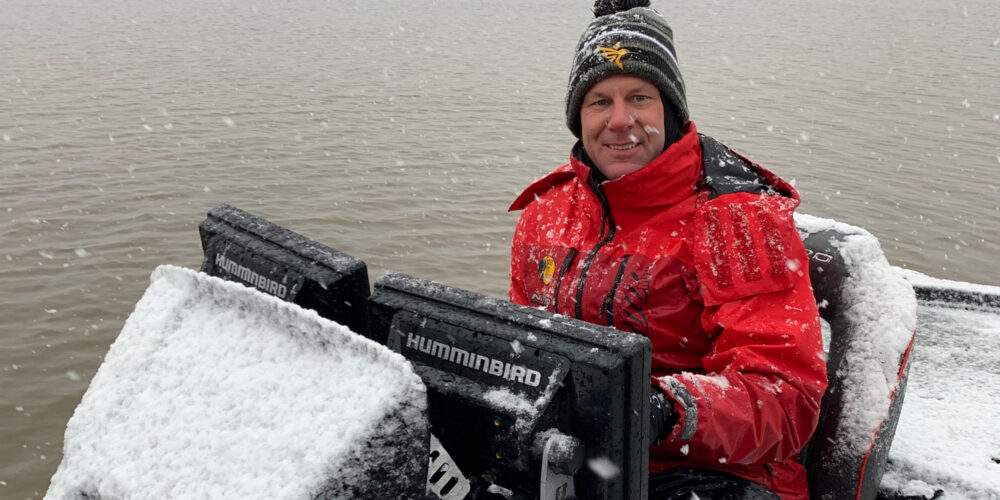 Obviously, I’ve been glued to my weather apps lately checking the Tyler, Texas/Lake Palestine area long-term forecasts for REDCREST. I’ve been checking it more than normal here the last couple of days, mainly because I can’t believe my eyes. When I saw the number 7 – as in degrees Fahrenheit  – I thought maybe my default location was stuck on Michigan!

Granted, there’s a fast warm-up after that. According to the long-term forecast, we’ll be back into the 60s by the last day of REDCREST; the problem there is those water temps are just not going to bounce back that quickly after a single-digit night and snow. After lows that crippling, it takes a week or two for a lake to moderate. I’m guessing that water temps will be pulled down to the low 40s, which is just abnormal for that part of the country.

Now, these are long-term forecasts, and they’ve been known to miss. But in recent years, technology has made these kinds of forecasts fairly accurate, so at the very least I’m saying there will be lows in the teens for at least a couple of nights before the official practice starts. That’s still a drop brutal for that area.

My “Notes to Self”

With these factors now in mind, here are a few “notes to self” that I’m starting to lock in my head this week. With so much of a change between the start of practice and the end of the tournament, new windows of opportunity are going to open as the event progresses. So these mental Post-it notes, so to speak, will help me recognize these windows as they start to crack open.

Stay away from fresh, cold mud. This is absolutely the worst condition in bass fishing. Nothing shuts bass down quite like cold, muddy water. Given what I saw at Palestine when a scouted it before cut-off, there’s potential for some of the creeks to blow out if we get rain and/or snow with this front.

Keep a watchful eye on the temperature gauge at all times. I’m usually not an obsessive water temperature guy. I am aware of it in a general sense, but in situations like this, one or two degrees can make a huge difference. Also, a few degrees warmer water can be a tip-off to a more stable, clearer water area, which will be at a premium. I’ll be watching the water temp like a hawk.

Be ready for the first hint of southerly wind. It not only blows into the more northern, protected areas, it’s going to be a bit warmer, giving those areas another critical bump in temperature.

Be mindful of radiant sunshine. Even if water temps dip into the 40s, bass will come out and sun on brutal cold days, if there is intense sunshine. Dark bottoms, rocks, logs and vegetation soak up that radiant heat and can make the shallows slightly warmer than other water. Intense sunshine can create potential windows.

Be aware of activity periods. Generally in the coldest of winter, there are two periods of activity: first thing in the morning and then late in the afternoon at the peak of any warming water.

Bites will be slower than normal. I don’t think REDCREST will be like a normal Bass Pro Tour tournament, where the action is fast and furious. Mentally, I’ll probably approach this one more like a five-fish tournament instead of a numbers race. I’m thinking this one will be quality over quantity kind of pace.

So there’s a look at what I’m trying to get my mind prepared for as we potentially embark on some of the coldest water temperatures Major League Fishing has ever encountered.