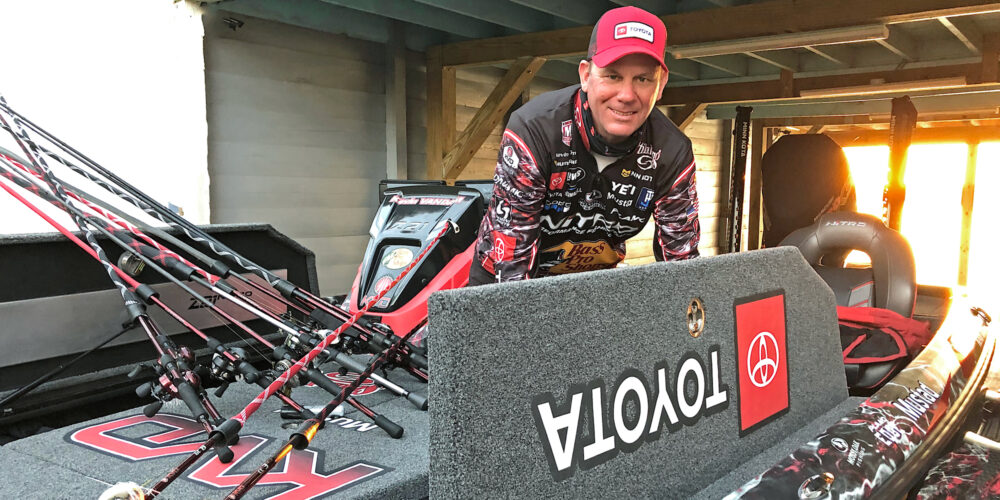 Editors Note: This is the third of a series of short daily accounts of Kevin VanDam’s REDCREST event this week as told to Alan McGuckin of Dynamic Sponsorships.

On Tuesday evening, Kevin VanDam sat working on tackle amid a perfect 65-degree late winter sunset over Lake Eufaula, but most of his thoughts were focused on the moon.

Qualifying Day 2 at REDCREST 2021 presented by Old Wisconsin Sausage was tougher than expected for VanDam. He managed just three scorable Lake Eufaula largemouth for a total of 8 pounds, which was still good enough for 10th place after two days of competition and the chance to move on to the Knockout Round.

And he’s still betting on the goodness an approaching full moon is about to deliver.

“See that moon? That moon is 90 percent full, and with water temps now at 55 to 60 degrees, that means spring’s magic is about to happen.”

VanDam knows the majority of southeast Alabama’s largemouth will likely spawn in late March, but the “early bloomers” will show up this week during REDCREST to kick off the annual reproductive ritual.

He’ll continue to throw a Strike King Thunder Cricket, and mix in a swim jig too in less than 4 feet of water. It’s the pattern that’s worked well enough this week that VanDam sees no reason to change. In fact, he thinks it will actually get stronger.

The “pork pattern” continues to bode well too. He’s eaten pulled pork sandwiches every day in the boat for lunch. He had smoked pork tenderloin for dinner Monday night and was grilling pork chops for dinner Tuesday night.

“I’m just trying to fish areas where I know they’re coming to spawn,” says VanDam, whose record in big events on the cusp of the spawn is unbeatable. “I know when that first wave of fresh spawners come shallow, things can get really good in a hurry.”