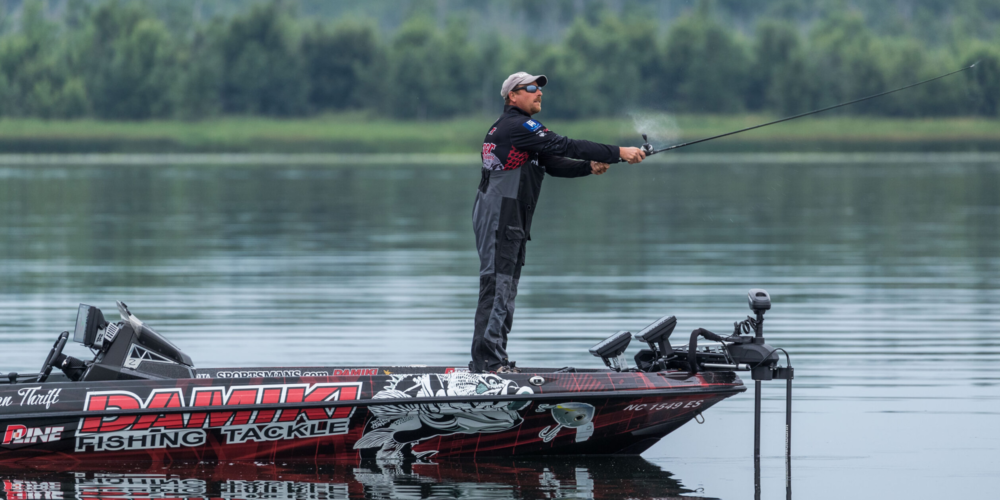 PLATTSBURG, N.Y. – The 2021 Bass Pro Tour season has entered the home stretch, and after this week’s Toyota Stage Six Presented by Googan Baits on Lake Champlain, there will be just one event remaining. That means there will be multiple storylines Aug. 5-10 as anglers vie for the Angler of the Year title, and REDCREST and Heavy Hitters berths.

Lake Champlain is a favorite for many anglers as it offers a variety of ways to catch fish, both largemouth and smallmouth, and because of the sheer number of willing bass swimming in its waters. Fans should expect plenty of action on MLF NOW!, according to Bryan Thrift and local angler JJ Judd.

Few bass fisheries in the nation are as highly regarded as Lake Champlain, which borders New York and Vermont and also reaches into Canada on its northern end. It’s a frequent stop for all professional bass tours and harbors an abundant population of smallmouth and largemouth, each of which could produce a win.

The lake sets up perfectly as a tournament venue, with plenty of space (it’s over 100 miles long), and with a variety of bass-holding habitat. The southern end, including the famous Ticonderoga (also known as “Ti”), is full of vast milfoil beds perfect for largemouth. The northern end is clear and rocky with grass mixed in, making it suitable for both smallmouth and largemouth.

North Carolina’s Bryan Thrift was one of several Bass Pro Tour anglers who competed in the recent Toyota Series tournament on the lake. Thrift led that event for two days before finishing sixth, and it gave him a taste of the current fishing quality on Champlain.

However, Thrift plans to shift gears for Stage Six and the Bass Pro Tour format.

“I was catching quality fish but only getting eight to 10 bites a day during that event,” he said. “That’s not going to work in the Bass Pro Tour format. I can’t even begin to tell you what I’m going to do, but it’s Lake Champlain and full of fish. I just need to find the best way to get bites because you can’t afford to go 30 minutes without catching a fish here, or you’ll drop quickly on SCORETRACKER®.”

One thing that Thrift loves about the lake is the variety of ways to catch a bass, which he thinks will be the case at Stage Six.

“There will be guys flipping milfoil for largemouth and guys fishing for smallmouth with topwaters and finesse stuff,” Thrift said. “That’s what’s so great about this lake: you can catch them on so many different techniques. There are options here and the fish should be biting.”

Saint Albans, Vermont angler J.J. Judd has eight Major League Fishing Top 10s on Champlain, including a 2018 Phoenix Bass Fishing League win and an eighth-place finish at the recent Toyota Series event. He keeps close tabs on the lake and expects some big numbers from the Bass Pro Tour field.

Judd shared that Champlain is fishing a little different than years past due to unseasonably low water levels. Judd expects some of the traditional areas of the lake to be a factor but in a slightly different way.

“Right now, some of the best largemouth areas are very shallow because of the lower water,” he said. “There really isn’t any good grass and it’s hard to access some of the best areas without crossing through into Canada.”

One such area is Missisquoi Bay on the lake’s northern section near the Canadian border.

“It’s probably the worst year I can remember up there for largemouth,” Judd said. “I do think ‘Ti’ will play a little more than Missisquoi and the locals have been saying that the bite is starting to heat up down there. All of the traditional largemouth areas have low water and hardly any grass, so docks have been holding the largemouth.”

When asked what techniques will shine, Judd predicted jigs for largemouth and drop-shot and Carolina rigs for smallmouth.

“It’ll be interesting to see how this event plays out in this format with both species in play,” he said. “It’ll take some strategy and guys will also have to factor in how long it takes to land fish. You can land those largemouths a lot faster than a smallmouth. The key will be to find the biggest groups of fish, no matter what species they’re targeting.”

Stage Six could turn into a major battle between the species as Champlain is seen as one of the best multi-species fisheries in the nation.

“Smallmouth have become the dominant species and they’ve gotten bigger,” Thrift said. “It used to be the only way to catch a 20-pound bag in a five-fish tournament was with largemouth or a mixed bag. Now, we’re seeing big bags of smallmouth multiple days in a row.”

Judd knows there’s a solid population of both species, but he’s banking on smallmouth.

“I think smallmouth bass will be where it’s at for this event,” Judd confirmed. “They are all done with that postspawn period and will be grouped up in places. You can catch plenty of largemouths, but it’s harder to find a group of them in one area.”