Lake Eufaula REDCREST Redux: Could be More of a Slugfest With Bigger Weights 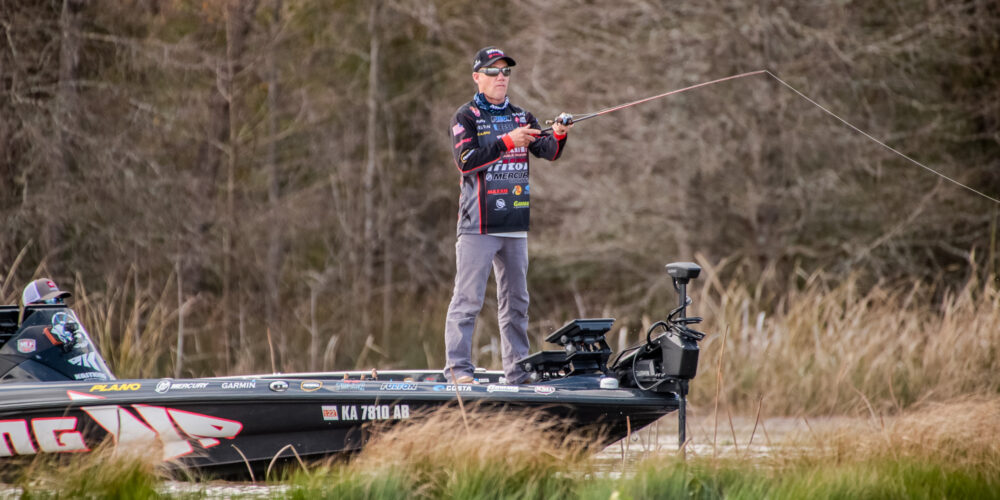 Brent Chapman connected with an 8-15 the last time he fished Lake Eufaula. Conditions are setting up for more of the same for REDCREST. Photo by Phoenix Moore.
February 20, 2021 • Joel Shangle • Bass Pro Tour

EUFAULA, Ala. – It’s deja vu all over again…but better.

As the countdown to REDCREST 2021 presented by Old Wisconsin Sausage winds down to the Monday, February 22 kickoff – and the field of 40 qualifiers redirect their travel routes away from East Texas to southern Alabama – it’s becoming clearer by the hour that they’re heading toward a potential slugfest.

With this week’s emergency relocation of REDCREST 2021 from Lake Palestine, Texas, to Lake Eufaula, Alabama due to the deep freeze that shut down much of the Lone Star State, tournament conditions went from “a total mystery” on an unknown, weather-affected fishery, to “potentially outstanding” on a well-known, highly regarded, familiar lake that appears to be setting up perfectly.

“Lake Eufaula is one of the best tournament bass fishing lakes in the entire United States,” said Randall Tharp as he cruised through southern Louisiana, en route to a quick stopover at home in Florida before heading to Eufaula for practice on Sunday. “It’s that caliber of lake like the Tennessee River, but it gets a lot less pressure on a daily basis than those other lakes do. It’s real dynamic: You can win offshore, you can win shallow, it basically has everything a bass fisherman could ever want.”

It also has some recent (and very comparable) February history among the anglers fishing REDCREST on February 22-26.

MLF debuted the new 2-pound minimum weight in the Big Bass Capital of the World at the 2020 Bass Pro Tour season opener at Eufaula, an event that Jacob Wheeler eventually won in a runaway thanks to a strong offshore bite. That tournament was held slightly earlier in the winter (February 7-12), and was influenced by heavy rains and dramatic fluctuations in water levels and water clarity.

Shaping up for a Slugfest

This time around, the REDCREST field will be blessed with sunshine, a consistent warming trend and a more stable Chattahoochee River system: Forecasts call for showers and a high of 61 degrees on Qualifying Day 1 on Monday, developing to a high of 71 by the Knockout Round and nary a rain cloud in sight the rest of the week.

“It was close to the same time last year when we started the season, but I see a big difference in the conditions,” Tharp said. “(In 2020) we had crazy rains and it was cold. The biggest negative that week was the water going up – not inches, but feet. We caught ‘em pretty good, but conditions weren’t ideal. You can never predict exactly what’s going to happen (with the weather), but next week looks like highs in the upper 60s with sunshine. It should be a lot more stable. I think we’re going to see more of a slugfest, with bigger weights.”

The numbers at Stage One in 2020 were already plenty stout: the average weight of the 770 scorable fish put on SCORETRACKER® was 3 pounds, 5 ounces. Despite the unstable water levels, Eufaula produced 71 fish weighing 5 pounds or more, including 22 fish over 6 pounds, three over 7 and two over 8 (Brent Chapman’s 8-15 giant and Jordan Lee’s 8-0).

“What we saw last year was just a testament to how good that fishery is,” Brent Chapman said. “The way it’s setting up now, we could hit it just right and it could be crazy. None of us had Eufaula on the radar at all – we were all wondering how we’d figure out a frozen Lake Palestine – but it’s a great choice for this tournament. We’ve all been there before, all we can really do is check the water level, show up on Sunday for practice and start to build a plan. I think it’s going to be a great battle.”