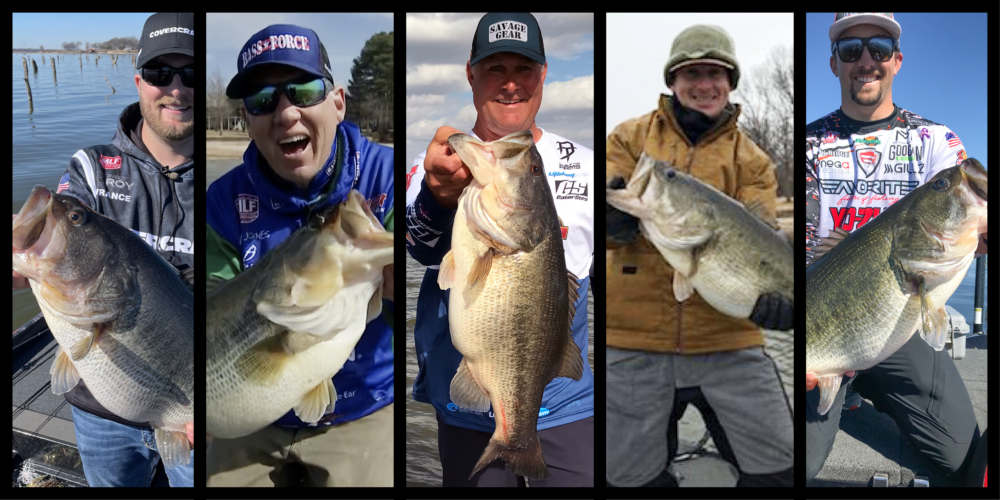 QUITMAN, Texas – The 10-pound mark is a bucket-list goal for anglers everywhere when it comes to largemouth. A 10-pounder is a fish of a lifetime for most anglers and rare for most parts of the country, but those odds go up during the prespawn in big bass states like Texas.

Toyota ShareLunker statistics will tell you that there are plenty of 10-pound-plus fish in Lake Fork, but catching them when it counts during a tournament is special.

Five Mercury Pro Team anglers competing in the Toro Stage Two Presented by Grundéns on Lake Fork have landed a double-digit bass so far, and there’s still one more day of fishing left. Here are the stories of how they caught them.

Bradley Roy has been on a roll lately with his first big win at Stage One and a personal best bass to kick off the first day of Stage Two. Roy was fishing just outside a major spawning area, fishing a jerkbait while watching his forward-facing sonar.

“I was using my Lowrance Active Target to look for fish in the tops of the trees right along a creek channel,” Roy said. “I saw her down there and she looked big, but I didn’t know how big she was. She followed it and would react to every twitch and she finally ate it right by the boat. I had the same thing happen with ten other fish that didn’t commit, and I was just about to give up and reel it in and make another cast.”

Alton Jones breezed through the qualifying rounds and automatically qualified for the Championship Round. He caught plenty of bass, but none as memorable as the 11-2 he hooked on a crankbait on his first day of fishing.

Jones had shaken a fish off during practice next to a tree and returned to the spot on the first day of competition. He had been using a spinnerbait but decided to switch to a Rapala Ott’s Garage Slim 6 crankbait in red crawdad that he had swapped the stock hooks for No. 4 Owner Short Shank Trebles. He made a cast and saw two fish following the bait on his Garmin LiveScope.

“I saw two and the smaller one ate it right away, and I didn’t think the fish was that big,” he said. “It ended up being a 6-5, and I lined my boat back up and got the other one. The rod loaded up, and I didn’t think she was a double digit, maybe an eight, but when I grabbed her, I knew she was very heavy.”

After weighing and releasing the fish, he went back and added a 3-pounder, making it three casts in a row on a single tree. He also added one over 4 pounds from it on his second day of fishing.

Zack Birge hooked and landed a 10-14 on the first day of the tournament, and it wasn’t even the biggest of the day as Roy earned the Berkley Big Bass prize. Birge’s big bass came on a Hardcore Minnow Flat 110 suspending jerkbait in the ghost pro blue color with the help of his Lowrance Active Target.

“I had been catching some nice fish on main lake points and they were usually only good for one or two bass, but they were good ones,” he recalled. “I pulled up and panned around and saw a big fish around a ball of bait in ten feet of water. It was so big that it looked like a whale out there; I’ve never seen one that big on the screen.”

Birge cast worked his bait down as far as it would dive – approximately 7 feet down – and watched the big fish follow it nearly 40 feet before it hit.

“I thought it was a drum at first, but once it started to follow the bait, I knew it had to be a bass,” recalled Birge. “The key with those fish following it is to keep the bait moving, or they’ll lose interest. I was using single, double, and triple rod twitches to keep her following it.”

Dustin Connell landed a 10-7 in the Knockout Round, just shy of his personal best caught a few days ago, a 10.62-oound beauty he caught during practice. Every fish Connell caught during the event came on a jerkbait while watching his electronics.

“I was targeting isolated timber, and I saw a leaning tree with my Active Target and she was sitting right under it,” Connell said. “I knew she was an absolute giant, and I made a perfect cast and she ate it right away when it came by her. I had 12-pound Seaguar AbrazX Fluorocarbon on and the fish started digging and wrapped around a big log, but I still got her. She only had one little point of the treble in her mouth.”

On his group’s second day of fishing in the qualifying round, Brandon Coulter stuck a 10-2 late in the day to give him a big boost. He finished the event with 32-0, and that fish was a big chunk of his total weight.

“It was late in the day, and I was down over 10 pounds from 20th place and knew I needed a big one,” he said. “I was fishing an area where I had lost a seven earlier, so I knew the area had big fish. I caught the big one on a vibrating jig casting around stumps like I had been doing all day long.”

“I knew it was a great big one and it rolled on the surface and was really dark,” he said. “I was hoping it wasn’t a catfish and then it ran into a brush pile and got stuck. I got over the brush and reeled down to it, which isn’t the best thing to do and then it came free, and I had a 10-pounder on 6 inches of line, but I got it in.”