Lake Travis Shaping Up to be a Power-Fishing Show 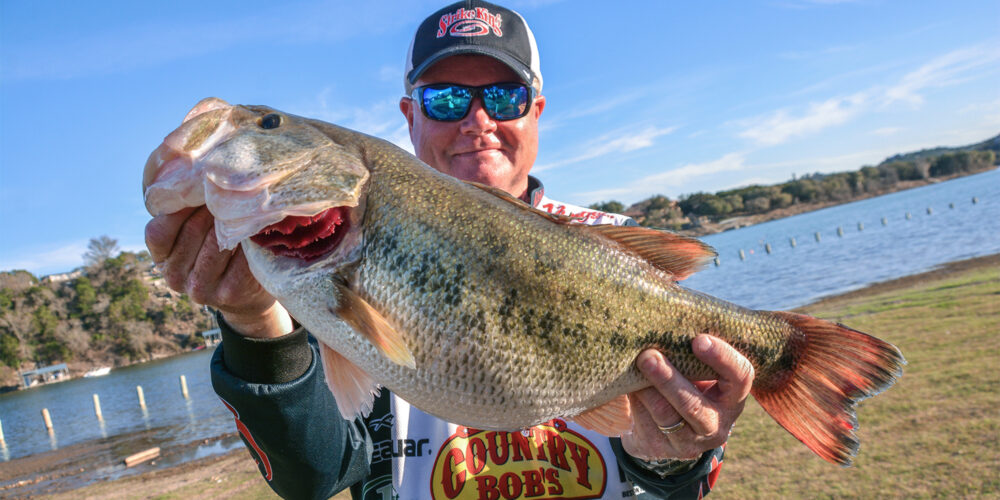 The last time he competed on Lake Travis, Mark Rose claimed the second of historic back-to-back wins to start the 2017 season. Can history repeat itself this week at Berkley Stage Two Presented by Mercury?
April 29, 2021 • Tyler Brinks • Bass Pro Tour

AUSTIN, Texas – By Texas standards, Lake Travis – the site of Berkley Stage Two Presented by Mercury – is a unique fishery that looks completely different than most anglers’ perception of a Lone Star State bass lake.

This impoundment of the Colorado River west of Austin is deep, clear and rocky, much like reservoirs in the desert Southwest or the bass lakes of the Ozark Mountains. Travis is an interesting venue for the second Bass Pro Tour regular-season event of 2021 for multiple different reasons.

Current Conditions and How It Sets Up

Even though the water level at Lake Travis currently sits 23 feet lower than it did in April of 2020, the reservoir offers plenty of fishable water for the field to explore. The lake features numerous coves and creek arms, and it runs over a long, twisting course which will all the 40-angler competition groups to spread out in search of fish in all phases of the spawn (with the majority in the postspawn stage).

Bushes, trees, bluff walls and docks should all factor into the equation for the week, and all reports show that the fish are biting well. Travis holds a large population of largemouth as well as the smaller cousin, the Guadalupe bass. Both species should be active, but largemouth will be the primary focus.

The variable minimum weight for Stage Two has been set at 1 pound, 8 ounces and there should be plenty of action on SCORETRACKER® from the minute “Lines In” is called to begin the event.

Travis has hosted several tour-level tournaments, but most recent history here has been either earlier or later on the calendar. During a 2018 Bassmaster Elite Series stop, Jacob Wheeler finished second, Cliff Pace finished third, and Brent Chapman finished fifth.

As the most recent Lake Travis winner in the field, Rose should be considered one to watch even though that event was under entirely different circumstances.

“That was a prespawn event and the water was 25 feet higher,” Rose said. “I was catching my fish in that event in 20 feet of water with a football head and swimbait, so I can’t rely on any of the same locations. Also, I’m thinking this event will mostly be postspawn fish relating to shad.”

Rose believes that power fishing should be most dependable way to be competitive on Lake Travis.

“I think the swimbait should be another player like the last time I was here, but plenty of other baits should catch fish,” he said. “The fish should be biting because, like most of the South, it was extremely cold this spring and the fish finally have some stable warm weather. I can see topwaters, crankbaits, and jerkbaits catching plenty of fish.”

Looking back at his 2017 win, he recalled days of great fishing with a large number of fish that would’ve been scorable in the MLF format.

MLF Fisheries Management Division biologist Steven Bardin analyzed data from the Texas Parks and Wildlife Department before the event; according to Bardin, that info shows a healthy population of catchable bass in Lake Travis

“A legal keeper on Lake Travis is 14 inches long and weighs an average weight 1-3,” Bardin said. “There’s a large abundance of fish that are larger than the 1-8 weight the anglers have this week. There’s also a solid population of fish that are way above that, including a new lake record caught by Trace Jansen in February. That fish weighed 15.32 pounds, but there are plenty of trophy fish over 5 pounds.”

As mentioned, the water level is low due to drought conditions and also very clear due to an explosion of zebra mussels in recent years.

“The lake was flooded in 2015, but it’s 25 feet lower than it was in 2017,” Bardin said. “All of the lakes on the lower Colorado River drainage fluctuate greatly with lack of rain. It’s also a clear lake and the zebra mussels have added to that.”

Bardin said the mussels have become a problem on all of the lakes on the system, including the red-hot O.H. Ivie, which sits 122 river miles above Lake Travis.

“They remove nutrients from the system and slow the growth rate for the bass,” Bardin said. “That’s what makes the ‘Clean, Drain and Dry’ so important and Lake Travis is a story of what happens with them. They found them in Ivie in 2019 and they were fully established last year, so we’re all watching how that plays out.”

Bardin expects the Stage Two field to focus on bass feeding on shad.

“There’s a good sunfish population, but shad will be the primary focus,” he said. “There should be a good shad spawn in the mornings and topwater baits will come into play as well as finesse fishing.”

Bardin believes Guadalupe bass will be biting, but will not be a factor in this event.

“They’re very aggressive and anglers will catch plenty of them,” he said. “They don’t get very big, and I don’t see them playing a role in this tournament.”

Trey Epich is a Texas tournament angler and Senior Vice President of Product for House of Outdoors, which includes Googan Baits and others. He has plenty of experience on Travis and surrounding lakes, and believes that Stage Two is setting up nicely for the Bass Pro Tour anglers.

“Historically, Travis is known more as a numbers lake,” Epich said. “The fish are in all three stages of the spawn right now and they should catch fish on pretty much everything. You’ll see fish caught on topwaters on the lake and big flutter spoons in the marinas. You might also see guys doing well with a Carolina rig.”

Epich believes the marinas on the lake hold the better quality fish, but an angler could win this event anywhere on the lake.

“If I had to guess, it would be the marinas that produce the winning fish,” he said. “The big split where the Colorado and Pedernales rivers come together are also areas that most anglers focus on. With the water being 24 feet low right now, some of the hardwoods and bushes should also come into play.”

Like Bardin, he mentioned the zebra mussels as having changed the fishery in recent years.

“They never used to be a thing, but they’re all over the dock cables in the marinas and on the trees,” he said. “There should be some fish that break off this week because they’re so bad about damaging your line.”