Largemouth, Smallmouth, Grass and Gobies Will All Influence Stage Six at Cayuga Lake 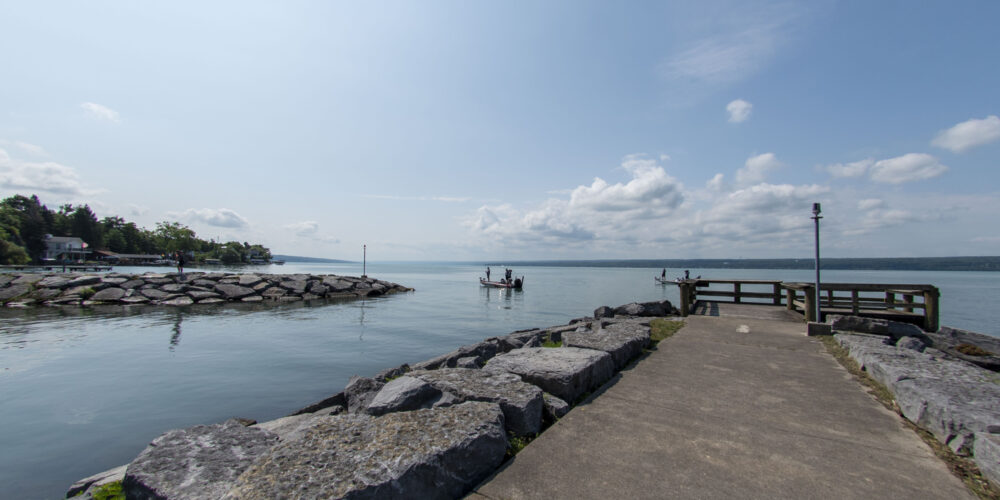 UNION SPRINGS, N.Y. – Following a rare eight-week break from Bass Pro Tour competition, the 80-angler BPT field makes its way to western New York this week – to Cayuga County, roughly 40 miles west of Syracuse – for the Fox Rent A Car Stage Six Presented by Googan Baits (Aug. 6-12). There sits 42,502-acre Cayuga Lake, a natural lake that stretches 38 miles north to south, with an average width of just 1.75 miles and a healthy mix of both largemouth and smallmouth.

There are only two events left in the 2022 Bass Pro Tour Season, so Cayuga will serve as the start of the final laps of the season as anglers make their moves toward a win, a REDCREST or Heavy Hitters qualification, or even a Bally Bet Angler of the Year title.

Cayuga at a Glance

New York native Casey Smith picked up a win in the 2021 Phoenix Bass Fishing League Northeast Division tournament held on Cayuga the same week last year as the upcoming Bass Pro Tour event. Smith brought 22 pounds, 13 ounces to the scales at that Aug. 7, 2021 event, which kicked out seven bags over 19 pounds and 22 five-fish limits of 16 pounds or better.

Smith says that anglers new to Cayuga are frequently impressed with the lake’s size, but that the sheer number of surface acres can be deceiving.

“It’s a big fishery but there’s not a ton of fishable water because of the massive drop-off in depth in the middle of the lake,” Smith said. “The north end is where a lot of the fishable water can be found, but once you get about 6 miles south of there, it turns into a rim lake.”

Reaching depths of over 430 feet in some places on the main lake, Cayuga’s drop-off is dramatic. Consequently, there’s not a lot of natural structure or cover to be found in a large majority of the lake, which means that the cover that exists draws ample attention.

“The cover and structure you find on Cayuga is going to be loaded with fish,” Smith said. “That’s going to cause a lot of anglers to share areas with other guys just because there’s not enough of that stuff to go around.”

A Grasp on Cayuga’s Grass

Smith says that Cayuga’s largemouth will be prolific in shallow grass. When Smith won the BFL in August of 2021, he was able to capitalize on isolated grass patches that remained after much of the other grass had died off. While he was the only one who really figured out that pattern in that BFL, Smith believes that the Bass Pro Tour field will zone in on the best grass ASAP.

“Certain types of grass are going to die off in mid-August on the north end of the lake,” Smith said. “A lot of fish were just sucked into that grass and hiding out (in the BFL), but the BPT guys are going to figure that pattern out pretty quickly.”

Kevin VanDam, who won an Elite Series event on Cayuga in late June of 2016, agrees that grass is the key to finding largemouth, but also notes the influence of zebra mussels and gobies on the fishery.

“The zebra mussels really clear up the water and the goby population has really boomed,” VanDam says. “Because of that, the size of all the fish in the lake has gotten a big bump.”

VanDam hints that the goby influx into Cayuga is a recent development. This baitfish – which most likely migrated through rivers and streams connecting the Great Lakes and Finger Lakes – has caused the weights of both largemouth and smallmouth to boom, leading to the state record smallmouth being caught out of Cayuga in the middle of June. That smallmouth weighed in at a whopping 8 pounds, 6 ounces, beating the previous record by 2 ounces.

Smallmouth and Largemouth in Abundance

While largemouth are the most prolific bass species in Cayuga, the smallmouth population is on the rise, making brown fish more of a player for tournaments. Primary patterns at Stage Six will likely revolve around largemouth, but opportunities exist for anglers to make moves on SCORETRACKER® with smallmouth as well.

“This lake is loaded with big largemouth as they’re the predominant species here, but there’s more smallmouth here every year,” Smith said. “Last year in mid-August, there were a ton of smallmouth caught. I think that will be the case again this year, but I don’t think anyone can win here just catching smallmouth.”

VanDam believes that there are benefits to catching both species, and says that either brown or green fish could help one of the Bass Pro Tour pros leave the Finger Lakes with $100,000 and a spiffy new red-and-silver trophy. It just depends on which angler fishes to his individual strengths the best.