Let’s Borrow Some Fantasy Fishing Strategies from Sports Betting, Shall We? 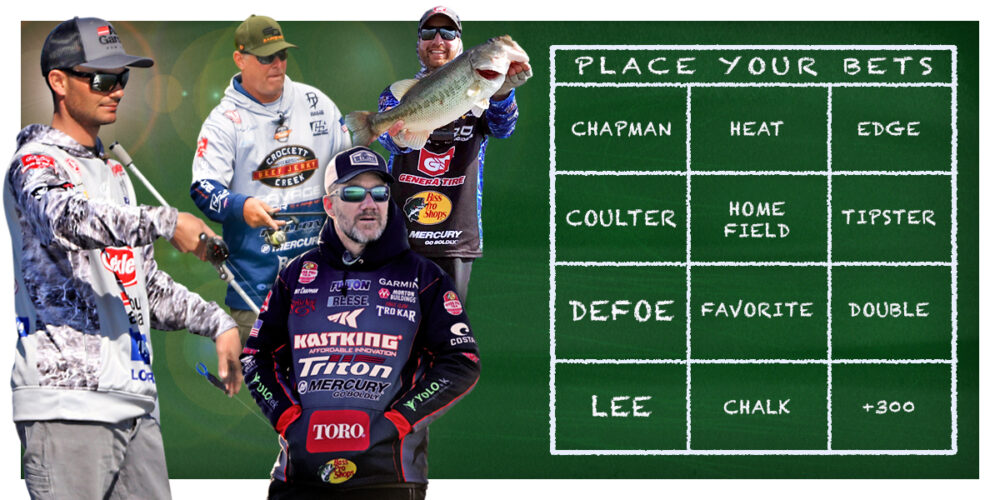 With just three events remaining in the 2022 Bass Pro Tour regular season – and only three “games” left on the Bass Pro Tour league side of Phoenix Fantasy Fishing presented by Abu Garcia – fantasy managers with designs on winning their individual leagues (or claiming any of the prizes up for grabs at FantasyFishing.com) should be considering all options as they build their teams.

There are as many roster-building strategies as there are fantasy managers, and FantasyFishing.com leaders like Kelly S. (3,880 pounds) and Kevin B. (3,876-9) have climbed to the top of the overall rankings thanks to smart player management.

But for the sake of debate – especially for those of you floundering in the bottom half of your league’s standings – let’s tap into a few fantasy strategies based on traditional sports betting theories, shall we? If you’re hoping to create some late-season fireworks at General Tire Stage Five Presented by Covercraft, maybe consider the following:

For those of you who are unfamiliar with sports betting, “chalk” is a reference to a significant favorite. The term traces its roots back to horse racing, when betting movement was tracked on a chalkboard and a horse whose odds improved required frequent erasing and replacing (hence, requiring chalk … get it?!).

There are some very obvious chalk picks in fantasy fishing – Jacob Wheeler and Jordan Lee have obviously made it onto the majority of FantasyFishing.com rosters throughout the season – but for this exercise, let’s think about building your BPT Stage Five roster based solely on Bally Bet Angler of the Year points. That might not sound sexy or daring, but it’s logical: the anglers hovering in the AOY Top 10 are there for a reason. They’ve flat out caught fish (and racked up fantasy weight) through four regular-season events to date, and are odds-on favorites to continue that trend at Stage Five. They’re chalk.

Sports book sharpies estimate the home-field advantage in the NFL to be worth somewhere between 1 ½ and 2 points a game. That makes sense to me – waking up in your own bed and playing in a familiar stadium with a friendly-to-you crowd seems worth at least 2 points, right?

You don’t have to look far down the Bass Pro Tour roster to find a hearty number of anglers who could consider Watts Bar their home field: eight anglers live within an 90 minutes of Spring City, Tennessee, and a ninth lives less than two hours away. Let’s throw out the chatter about the “home lake curse” – it’s balderdash, IMO – and build a roster for Stage Five based solely on angler familiarity with the fishery.

Note the asterisk next to the fifth pick in Group B. Kevin VanDam is by no means a local to Watts Bar, but his career success on (and familiarity with) the Tennessee River translates to somewhat of a home-field advantage.

This is the epitome of risky betting and statistically unwise, but there’s a reason why sports bettors occasionally play the longshot: there’s usually a hearty reward when a darkhorse comes through. Granted, fantasy fishing doesn’t offer you exponential odds-based payoffs like picking a 20-to-1 longshot like Golden Glider in the upcoming Belmont Stakes would, but it does offer you rewards in the form of pounds and ounces that other managers will likely miss out on.

However (and this is a big “however”), you should put a little thought into your longshots. I wouldn’t take the opposite approach to the “pick the chalk” reasoning from above and simply choose the bottom 10 anglers in AOY standings. That’s definitely the definition of picking longshots, but it’s also the definition of “foolhardy.” There are some smart (or at least interesting) longshots lurking below 40th place in AOY standings to consider at Stage Five.

The Tennessee picks (Coulter, Murray, Lambert, Walker) are fairly obvious, the others aren’t so clear cut but with some statistical support to back them up.