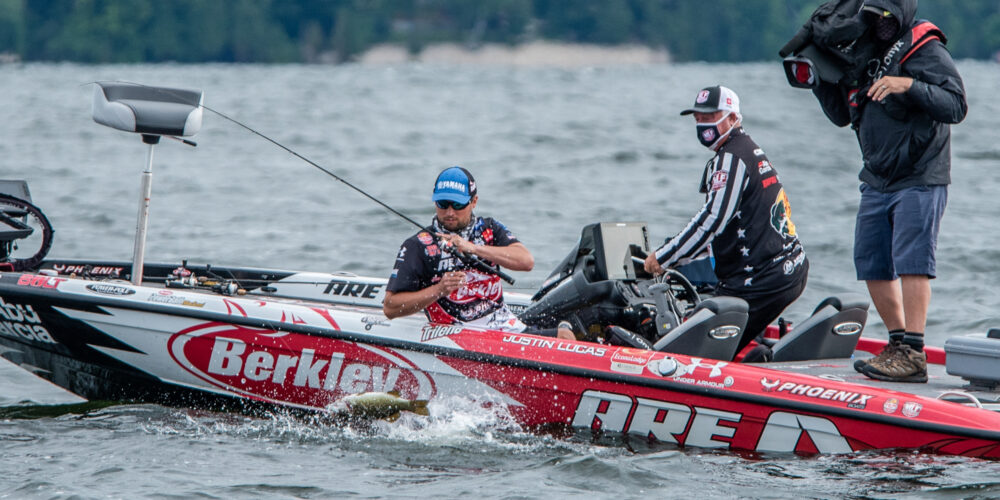 Justin Lucas can certainly be described as a winner. With multiple pro-level victories in his career – along with a tour-level Angler of the Year title – Lucas is arguably one of the top players on the MLF Bass Pro Tour.

Even though he’s accustomed to winning, the Alabama pro readily admits that he has faults, and can certainly ride the emotional roller coaster from year-to-year and tournament-to-tournament. Positive momentum is his friend, and if the end of his 2020 season – a Bass Pro Tour win at Sturgeon Bay and a Tackle Warehouse Pro Circuit win on Lake Erie – is any indicator, Lucas has momentum on his side.

“The first year on the Bass Pro Tour, I missed four checks then earned four. In 2020, I missed checks at the first three events, then (finished with) two wins. It seems like at any point, I get on a hot streak and can make things happen.”

During the 2020 season, Lucas’ dissatisfaction with his performance peeked through during the MLF NOW! live stream.

“I get frustrated, and it’ll show: At the Lake Eufaula tournament, I was really down and said ‘I’ve got to stop sucking!’ I just (blurted) it out (on camera) because I wasn’t fishing good. When we came back after (the COVID break), I was good to go, but that frustration likely has something to do with the time of the year we were fishing.”

When Lucas references the time of the year, he’s talking about prespawn largemouth. Many events each season take place during the prespawn, and while many anglers think of that window as a time to catch big fish, Lucas assesses it as his weak spot (for now).

“My Achilles heel in fishing has always been pre-spawn largemouth,” Lucas says. “I just haven’t performed well in events that time of year. Once the largemouth start to spawn – or during postspawn and summer – I’m very comfortable, and I know I can get my licks in. My focus in the offseason is to become a better prespawn largemouth fisherman. I need to figure out how to start off early in the year catching them.

“I’m not sure why it’s tough for me. I feel like I don’t know enough about it. Most guys have weaknesses in their game. I really don’t know why I do, maybe growing up in California, I never really fished for largemouth in the colder, muddier water.”

But just like a gifted mixed martial arts striker honing his grappling abilities, Lucas is hard at work improving his prespawn knowledge.

“I plan to fish some of the shallow dirty water lakes here in Alabama to try and hone my skills,” he says. “I need to get comfortable throwing a spinnerbait – it’s a weakness of mine – and also catch some cranking. I still don’t have a lot of confidence fishing those techniques.”

Lucas will get plenty of opportunities to show his improved prespawn fishing game and to see if he can keep his momentum going throughout the year since he will be fishing both the Bass Pro Tour and the FLW Pro Circuit.

“I’ve always fished better competing in more tournaments during the year,” Lucas says. “This year, fishing both the Bass Pro Tour and the Pro Circuit, along with Heavy Hitters and REDCREST, I’ll have something like 15 chances or so to make a big paycheck. Seriously, winning one (tournament) makes your year, but I’d like to win two again. I think that’s a good goal, I’d love to do that again.”

With the tumultuous 2020 season behind him, a handful of things really stood out to Lucas.

“When we started the 2020 MLF season with the new 2-pound minimum for a scorable bass, that was huge for the Bass Pro Tour and the anglers,” Lucas says. “It got us back to targeting bigger fish, and that’s what moves the products we use. Another big thing to me was fishing Heavy Hitters and making an adjustment and leaving an area during the Knockout Round. That decision saved me and really stands out for me personally. That was huge.”

But Lucas’ biggest moment of 2020 happened on the waters of Sturgeon Bay, during the Championship Round of Bass Pro Tour Stage Five.

“My favorite moment from the 2020 season for me was during the last period of the Bass Pro Tour on Sturgeon Bay when Mark Daniels Jr. and I battled it out on the final day,” Lucas says. “That was amazing, very stressful, and I was very relieved with that win. I’d love to do that again.”