Lucas Lights it Up With Record Day on Sturgeon Bay 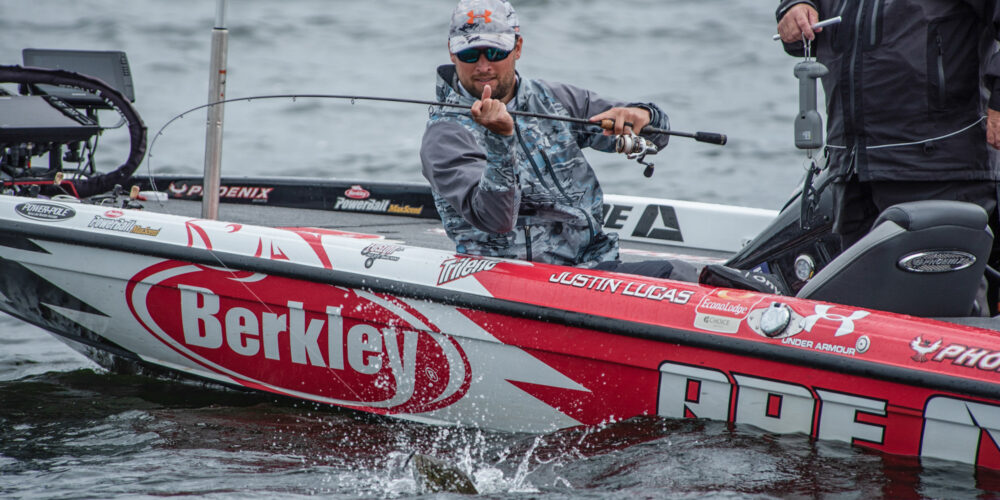 STURGEON BAY, Wis. – Going into the week at the Bass Pro Tour Covercraft Stage Five Presented by Abu Garcia, many of the 80 anglers in the field shared that the potential existed for a record-breaking day.

They were right. It didn’t take long for records to start falling.

The first record to be rewritten was the single-period weight as Justin Lucas ended Period 1 with 29 bass for 78 pounds, 12 ounces. Lucas would go on to set a record for the biggest single-day weight as well with 141-9, a record-breaking day that overshadowed several others who had impressive daily catch totals.

Both Josh Bertrand and Scott Suggs eclipsed the 100-pound mark, and the field set a 2020 season record with 553 bass on the day.

The previous single-day record was Jacob Wheeler with a catch of 129-14 at Stage Seven Table Rock in 2019, but Lucas eclipsed that record with 50 smallmouth. It took Wheeler 88 bass to get to the previous record, which shows the quality of bass that swim in Sturgeon Bay and connected waters.

Lucas Puts on a Show

Lucas started strong and never let off the gas and he milked the same general area in Sturgeon Bay all day long.

“I wasn’t even going to start there and ended up catching almost all of my fish in the same spot,” Lucas said, admitting that he caught roughly half of his fish while watching his electronics and the others by blindly casting his drop-shot rig.

Lucas rigged up six rods with drop-shot rigs with a Berkley MaxScent Flat Worm to maximize his efficiency if he broke off or lost a weight to the bottom.

While he made it look easy, the day far exceeded his expectations.

“I didn’t know what to expect today and my goal was to catch 20 fish. It was just an incredible day,” Lucas said.

Looking ahead, Lucas is unsure how his area will hold up when he returns for his next qualifying round in two days.

“I have no idea if they will still be there, but I have a bunch of other spots I never even went to today,” he said.

Arizona’s Bertrand started slowly, but heated up dramatically in the final two periods. He overtook Suggs for the second position in the closing minutes of the final period, and did so solely with a drop-shot rig.

“I planned to stick with a drop-shot all day and that was the key today,” Bertrand said.

Lucas’ only real challenger throughout the day was Suggs, as the former Forrest Wood Cup champion crept to within 4 pounds of Lucas midday. In the end, Suggs finished in third place with an impressive 33 bass for 119-4. His average fish was stout, with an average of over 3 1/2 pounds per bass. That included a day best 5-6 Sturgeon Bay smallmouth.

Like Lucas and Bertrand, Suggs relied on a drop-shot rig with Berkley soft plastics.

“A lot of times you’ll find a big group of fish in practice and go to them in the tournament and they’re gone,” Suggs said on the General Tire Takeout show. “This time, they were still there. It was one of those days you dream of.”

Group B gets their first crack at Sturgeon Bay tomorrow and will see a forecasted high temperature of 80 degrees under sunny skies. The wind forecast is light and variable, with speeds up to 8 miles per hour.

Watch all three periods of competition during MLF NOW! live stream July 10-15, beginning at 7:45 a.m CST. Watch for free on MajorLeagueFishing.com, the MLF app or MyOutdoorTV. The General Tire Takeout show starts at approximately 4:05 p.m. CST after each day of competition.