Lucas Scores Championship Round Berth with 181 Pounds at Stage Six 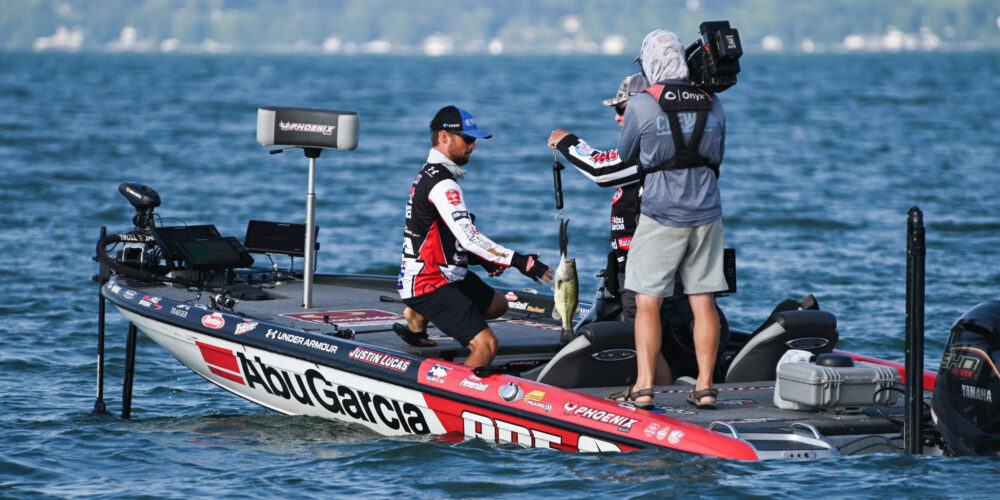 UNION SPRINGS, N.Y. – The hits keep coming at the Fox Rent A Car Stage Six Presented by Googan Baits on Cayuga Lake as the lake continues to kick out big bass. Anglers in both competition groups are proving that they can catch them a multitude of ways, Cayuga is further cementing itself as one of the best largemouth fisheries in the country.

The bite slowed down some Monday, but it’s too soon to tell if that trend will continue for the remaining three days of the event. It could be the fishing pressure catching up with areas or the changing weather conditions. We’ll know for sure in the next few days, but the big totals posted through the first three days show it will take some serious weight to win this event during the finale on Thursday.

Lucas Advances to Championship Round

The Championship Round got its first entrant as Justin Lucas added 16 bass for 54 pounds on Monday, bringing his total to 181-1 over two days.

Even with a 19-pound lead to begin the day, Lucas knew he was not safe since the man right behind him was Jacob Wheeler. The start of the day hinted at a shootout as Wheeler got off to a fast start and the two took turns with the lead. It appeared that whoever caught the last bass of the day would win the round, but it ended up being settled earlier in the day.

The bite slowed for Wheeler and he was forced to start idling and looking for more areas once Lucas appeared out of reach. But Lucas sweated it out to the end and was thankful to advance.

“That dude is dangerous,” Lucas said of Wheeler. “I’m thankful I could get past him, but he’ll probably be out here again during the Championship Round. You have to make it there first to have a shot at winning, so I’m very thankful to make the final day.”

Lucas’ daily total was less than half of his first day’s haul, but still one of the better totals on Day 3. His 54-0 was the fourth-best on the day, but Lucas still felt unsure about what had changed.

“It felt a lot tougher out there today, so I don’t know what I’m going to do when we come back out here on Thursday,” Lucas said. “It was tough, and I somehow ended up with 54 pounds. Most of them were during the second period, where I was able to catch some nice fish.”

Lawyer the Big Mover, and Some Toro Cut Line Drama

As with all elimination days, plenty of drama and last-minute catches sealed the fate of a handful of anglers. Most of it was shuffling in and out of safety. On the day, only one angler moved inside the Top 20 after starting below it – Jeremy Lawyer.

Lawyer rocketed from 33rd to 10th on a day’s best 74-15. His banner day was easily the best of the day and helped him advance, supplanting Chris Lane, who dropped from 20th to 22nd.

Lawyer said he went to the same places today as he did two days prior, but that he changed his approach.

“I put down the meat and potatoes and went to the twigs and berries,” Lawyer said of his switch from power techniques to finesse. “I was so far behind, I knew I had to make a change. The key was fishing finesse tactics and slowing down.”

Looking ahead, Lawyer is feeling optimistic after his great day.

“I was certain I’d be driving back home to Missouri tonight, so I feel really good,” he said. “I was able to run some new areas in the final period to see if it would work other places, and I kept catching them. I cut my hook off for the final hour because I didn’t want to hook any more of them and was able to expand my areas.”

Jonathon VanDam had some last-minute heroics, with a 3-14 with 11 minutes remaining to get back into safety. He began the day in 16th and fell out of the Top 20 before ending in 20th.

“What a nerve-wracking end of the day,” he said. “I had to sweat it out until the very end. If that doesn’t get you excited, I don’t know what will.”

Wheeler entered the week with a 38-point lead in the Bally Bet Angler of the Year race, and is looking to maintain his cushion over Jordan Lee. Wheeler made the Knockout Round, so the worst he can finish at Stage Six is 40th, putting the pressure on Lee to keep catching them when his group returns to Cayuga Lake on Tuesday.

The Fox Rent A Car Stage Six Presented by Googan Baits continues on Tuesday as Group B is back, vying to make the Knockout Round. It’s much tighter at the top of SCORETRACKER®, as Michael Neal, Mark Daniels, Jr., Brent Ehrler, and Alton Jones are within 10 pounds (possibly just two swings of the rod on Cayuga) of each other. Fans can watch it unfold on MLF NOW! beginning at 7:45 a.m. ET.