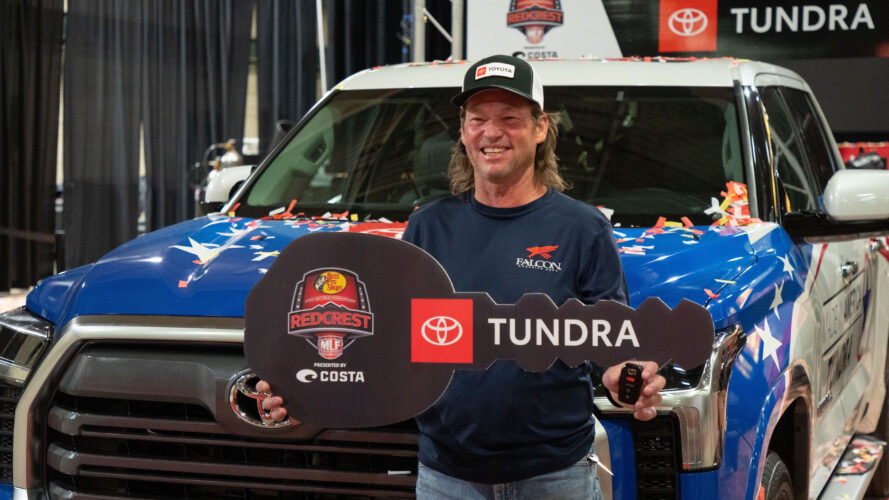 Some folks have a fear or avoidance of the number 13. It’s a condition described as “triskaidekaphobia” – a really long word that’s tough to pronounce, and absolutely does not apply to Oklahoma fishing fan and avid angler Allen Hill.

Hill chose box No. 13 as finalist in a sweepstakes drawing at Bass Pro Shops REDCREST Presented by Costa and discovered the keys to an all new 2022 Toyota Tundra inside.

“I’ve always been one to pick 13 anytime I can,” said the 53-year-old Hill, who works at a Tulsa welding gas and supply store. “When Kevin VanDam first handed me box 13 up on stage, all I saw was a Toyota hat inside. Then the keys fell out and the rush of adrenaline hit me. The next thing I know I’m giving KVD a hug and going crazy.”

Hill attended the REDCREST Outdoor Sports Expo Presented by Costa on both Saturday and Sunday because of his love for bass fishing, but also purposely for the chance to win the all-new Tundra.

“I had a great time Saturday at the Expo, but on Sunday I purposely went back to visit all the vehicles in the Toyota booth to become eligible for the Tundra sweepstakes giveaway,” Hill said. “I knew you had to be present to win. And it turns out, the first person’s name they drew was not there, but the next name they drew was mine.”

Humbled by the win, Hill says it was 15 years ago when he last drove a brand-new truck, and after talking to MLF pro James Elam – a longtime Tundra buyer and Bonus Bucks participant – there’s no way he’ll sell his new prize.

“James Elam had a ton of great things to say about his Tundra, and everybody knows Toyotas tend to run forever, so we’ll definitely be using it to tow our 22-foot bass boat to Grand Lake, Lake Hudson, or wherever our next tournament is. I plan to drive it for years to come,” said Hill, who loves to pitch a 3/8 black-blue Jewel jig or cast firetiger-colored Bomber 6A crankbait.

Perhaps Hill should pack exactly 13 rod and reel combos in the boat for the next tournament, and pump exactly 13-gallons of gas in his all-new 2022 Tundra on his drive to the boat ramp. If his incredibly good fortune at REDCREST is any indication of 13’s goodness, there’s no telling what he might catch.