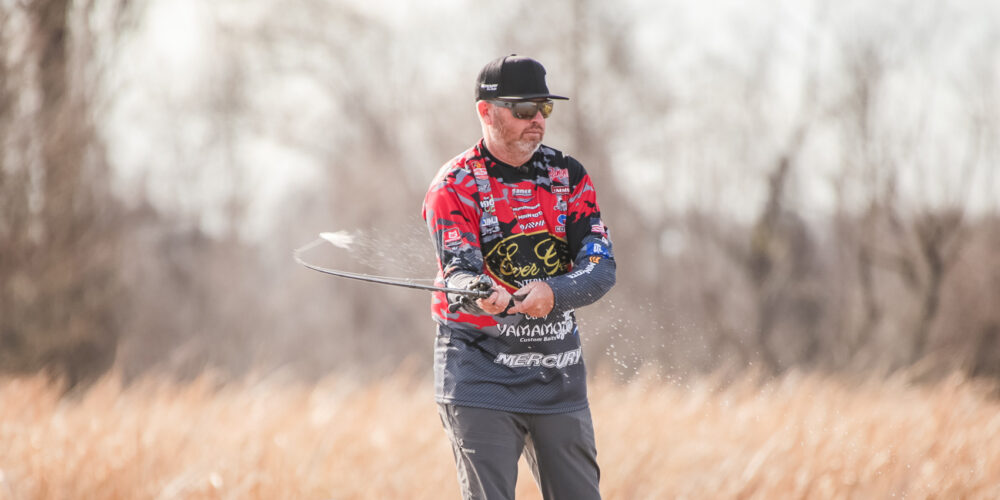 During Stage One Eufaula, Brett Hite managed to make the Championship Round cut by edging out Mike McClelland at the end of the final period. Photo by Phoenix Moore
August 18, 2020 • Mason Prince • Bass Pro Tour

In sports, there are two sides to every end result: the jubilation of victory or the agony of defeat. On Lake Eufaula during Stage One of the 2020 Bass Pro Tour, Brett Hite and Mike McClelland represented both ends that spectrum.

During the final hour of the Knockout Round of the first Bass Pro Tour event of the season, both Hite and McClelland found themselves in contention to advance to the Championship Round. Only one of them was able to weigh in a scorable bass when it mattered the most.

Hite entered the final 45 minutes of the Knockout Round in ninth place on SCORETRACKER®, just one scorable bass away from pushing McClelland below the Elimination Line. With time running out in the day and just 14 ounces separating him from McClelland, Hite needed to make a move.

“I made a decision to return to where I started earlier in the day to try and get that one last bite,” Hite said. “It was a long run, so I got to the area with only about 30 minutes left in the day. I knew I needed to catch some and quickly if I wanted to make it in.”

Hite was searching shallow for prespawn largemouth, moving from brush pile to brush pile on the southern Alabama reservoir. With only five minutes remaining, Hite set the hook on what he hoped would be his ticket to the Championship Round.

“I pulled out a near-3-pounder and was able to move ahead of Mike for that eighth and final spot,” Hite explained. “I had lost one like that just a little before, so it was awesome to find that one. It was one of those nailbiters that makes Major League Fishing so much fun.”

Hite ended the day just 1-4 ahead of McClelland thanks to that 2-2 largemouth he weighed in with less than three minutes remaining. The feeling of being that last-man-in is something that Hite hasn’t experienced before.

“To make a cut like that is like a rush of adrenaline,” Hite admitted. “It’s what we all strive for in professional fishing and that’s why we do it. There are times where I don’t come out on top, but I did this time and it was a great feeling.”

While Hite was celebrating, McClelland was packing up his rods after a disappointing finish.

“I felt like I had done everything in my power to put myself into a position to make the cut,” McClelland recalled. “I caught three fish that weighed 1-14 in the final 15 minutes of the day. I finally found a scorable bass over 2 pounds that put me inside the Top 8, but that didn’t last very long.”

This wasn’t the first time McClelland felt the pressure of the Elimination Line and by his guess, it won’t be the last.

“I’m not sure why, but I always feel like I’m the guy right on the edge of the cutline throughout my career,” McClelland said. “Missing the cut is obviously tough, but I would rather be in a position like that than not in contention at all. Staying competitive is what keeps me going in this sport.”

After making the full-time switch to MLF in 2019, McClelland says that the intensity at the end of the day during an MLF event is something that’s hard to replicate in a five-fish-limit format.

“The pressure you feel near that Elimination Line at MLF is something I can’t even explain,” McClelland said. “My entire career, it’s just been me against the fish to get five bites without really any pressure. Now, with SCORETRACKER®, it’s definitely more of me versus you kind of feeling. I like that, but it does come with a lot of added pressure. I feel like I ran a marathon when I end a day.”

Hite went on to end Stage One with an eighth-place finish while McClelland earned enough points in Stages One and Two to qualify for his first Cup event.