Mark Davis Dives Into the Diversity of the Swim Jig 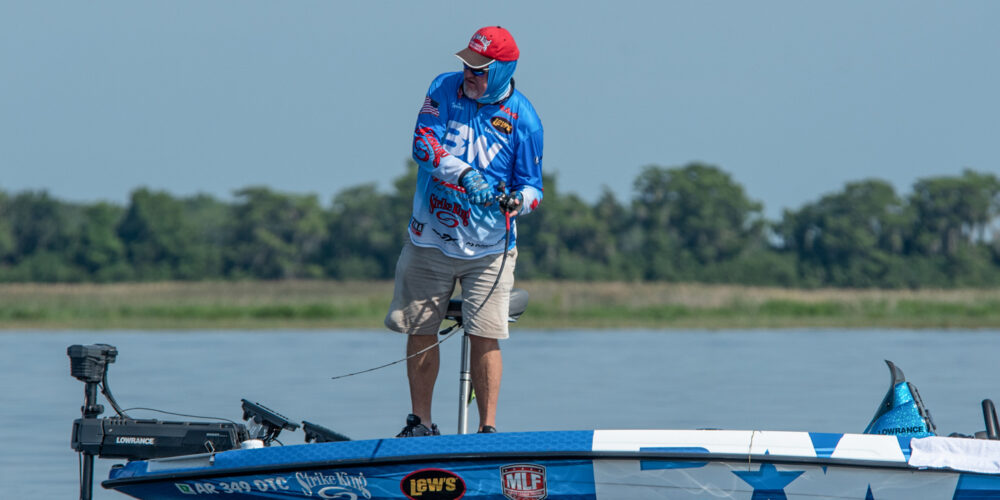 Mark Davis dives into the diversity of a swim jig and why it should be a staple for every angler. Photo by Garrick Dixon
January 6, 2021 • Mike Pehanich • Bass Pro Tour

Have bass grown smarter in recent decades? Are they shell-shocked from heavy angling pressure? Or are they simply suffering from the sensory overload of too many seasons of flash, flutter and vibration?

Mark Davis has noted changes in black bass bait response over the years — and some subtle changes on the part of anglers to contend with the bass’s behavioral shifts.

One such adaptation has been the emergence of the swim jig as a bass fishing staple. Today, it frequently substitutes for one of bass fishing’s most iconic lures.

“If you think about a swim jig, it has come to take the place of a spinnerbait, especially in clear water situations,” says the versatile angler from Mount Ida, Arkansas. “Twenty years ago, we were throwing spinnerbaits regularly, but so often today that’s not the way to go. Frequently, you want something more subtle, something that is all visual. That’s where the swim jig comes into play. It really shines.”

You can wind a swim jig fast, fish it slow… fish it, well, almost like a spinnerbait!

“The difference is there’s no flash, no built-in vibration,” Davis says. “And, if you think about it, it mimics so many things a bass eats. It mimics a crawfish. It moves just like a crawfish scoots and swims. It can imitate a shad, look like a shad. Or look like a bluegill. It can be a lot of different things to a bass. It seems like, more and more, I’m catching fish on a swim jig in the same places I caught them on a spinnerbait years ago.”

A well-assembled swim jig/trailer combination has powerful visual appeal to a bass, even in off-color water.

“You wouldn’t think it would work well in dirty water, but it does,” Davis says. “You can go to a dark color — black, black and red, black and blue. It works great in stained water, but it works equally well in clear water…and on all three species of bass. It’s a very versatile lure.”

Though he occasionally plays with variation, Davis builds his jig-trailer tandem around three basic colors: white to imitate shad; black and blue, a common crawfish color combination; and green pumpkin, a bluegill/sunfish color but a crawfish color as well.

Jig/trailer size and weight follow a similar rule of simplicity: match trailers to your jig and use the right weight of jig to match the application.

“Most people think of swim jig fishing up shallow, around emergent grass of some type or around wood cover, and it definitely works well there,” Davis says. “The deep swim jig thing is kind of a niche. It’s not going to work just anywhere. But it works well just winding it over the top of deep grass or the top of timber in, say, 10 or 12 feet, and a number of other scenarios, too.”

Many swim jig aficionados profess that active rod tip action is critical to success. Davis opts for an active trailer instead.

“A lot of guys think you have to shake your rod when you are fishing a swim jig, but you really don’t,” he says. “If you have the right trailer, you don’t have to do all that shaking stuff. You can just cast and wind it.”

The “right” trailers have built-in action. His first choice is Strike King’s Rage Menace, a grub-style soft plastic with twin tails. His second is the Strike King Rage Bug. Its narrower tail provides an active yet more subtle presentation.

“A lot of the time, one is just as good as the other,” Davis assesses. “In clear water, a real natural look is what I am trying to achieve — natural colors and subtle trailers. Sometimes it’s just a matter of personal preference.”

Off-color water calls for a trailer that provides a bigger profile. The Strike King Rage Craw fills the bill.

“The Rage Craw has a bigger presence in the water. It displaces more water,” he says. “The legs, the claws are spread out further. In dirty water, that bigger profile might be a consideration. But in clearer water, you want a more natural look.”

For a Different Look

One of Davis’ favorite modifications to his swim jig is the addition of a No. 3 willowleaf spinner blade with a ball bearing swivel. He adds it to a 3- to 4-inch length of 80-pound monofilament attached to the bait-keeper collar. It’s positioned under the skirt to flash behind the trailer.

“I tie the mono with thread to the collar of the bare jig, without the skirt, and then apply some glue or epoxy to hold it,” he explains. “The mono is pointing forward, sticking straight out. Once the glue sets up, I slide the skirt back over the collar. Then I bend the monofilament back underneath the hook, crimp it to lay backward with the skirt tails. Then I attach the swivel and blade. At times, that little extra flash helps generate bites.”

Finicky fish call for a more streamlined trailer, which he produces by cutting the appendages from the Rage Bug.

Davis prefers 20-pound fluorocarbon over braid for most swim jig applications, though he will go to 30-pound braid when fishing wood and thick vegetation.

“Looking back, a swim jig has produced for me in almost every event we have had up North,” says Davis. “Of course, it’s a very popular lure on the Upper Mississippi River. I’ve done very well with it on tournaments in Maine, too. It catches smallmouth!”