Mark Davis: Playing Out the Spawn 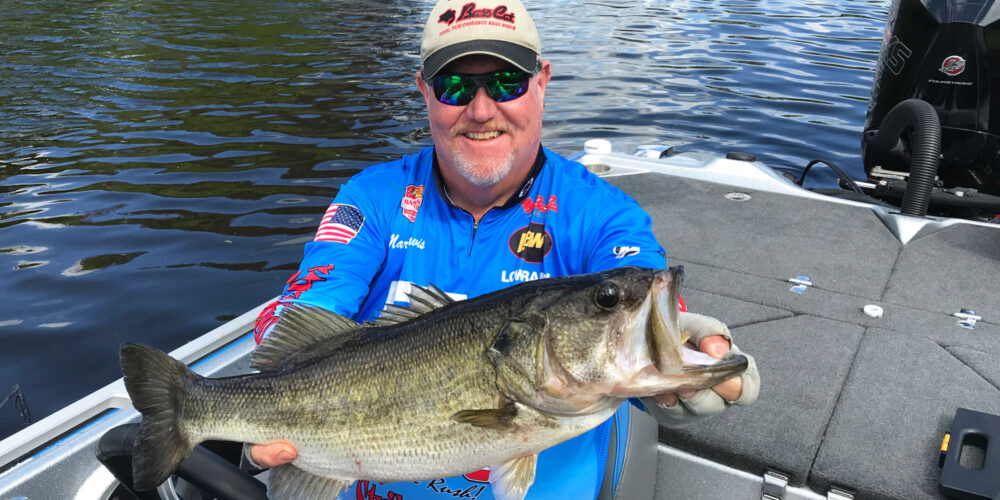 Despite endless annual replay on waters across the fishing world, anglers’ conceptions of the bass spawn remain cloudy and confusing.

“The spawn starts in the warmest waters of the lake or river system, in pockets, creek arms, sloughs, any shallow area that is protected,” says the popular pro from Mount Ida, Arkansas. “But you have a population of deep fish on highland reservoirs and other bodies of water. They stay deep. They live deep. They aren’t on the bank swimming around. When they spawn, they spawn deep, and not in those protected areas but in humps, points or even on a flat stretch in the main lake on deep rock or a stump. These are truly the last fish to spawn. They live deep and they don’t move up with the majority of the bass. A lot of guys don’t realize this happens, but it does!”

The phenomenon has gone largely unnoticed, but it fills in a piece of a puzzle that continues to intrigue bass anglers season after season.

He offers a likely scenario. You find the recently busy nesting areas in the shallows suddenly vacant. No bass. No beds. No fry. You move to deeper water. It’s a calm, clear day and, as your eyes adjust to the conditions, you can see the deep beds in 10 or 15 or even 20 feet of water. They aren’t feeding, and they are tough to rile. But they are there.

“There’s still a spawn going on,” says Davis. “You just can’t see it.”

Now the idea of a smallmouth bass on a deep bed is not surprising. Nor is that fish deemed particularly tough to tempt into a strike.

“But largemouth will spawn deep, too,” says Davis. “Especially these late spawners. A lot of it has to do with water clarity. The (nests) need sunlight.”

Sight fishing these deep spawners can be difficult to borderline impossible – at least in the conventional sense of sight fishing. But Davis has fashioned strategies that work.

“If I can find vegetation with an inside grass line, say 4 or 5 or even 10 feet deep, the approach is simple,” he explains. “I just position in the grass and cast to the bare area and work a Carolina Rig to the edge of that inside grass line. As soon as your weight hits that grass, you’re in the strike zone.”

In the absence of vegetation, the enhanced vision capabilities of his Lowrance take over.

“If you don’t have grass, it gets a lot harder, but the best way is to take a four-view look of the bottom with your electronics,” says Davis. “With LiveSight, you can find stumps, rock piles, anything rough and position yourself to cast to those. A largemouth hardly ever spawns without an object near. A smallmouth prefers to spawn near an object, too. The four-view really helps you pinpoint these locations once you’ve located the depth that they’re using. The process can be slow and tedious. But you can narrow the search. It’s a huge advantage.”

Granted, squeezing a bite out of deep, hard-to-locate spawners can be slow, even tedious. Familiarity with his Lowrance tools enables him to dial in on key objects where bass might position.

Taking on deep spawners is a game of patience, persistence and accuracy. His No. 1 tool for deep spawners is a Carolina Rig with a four-inch Strike King KVD Game Hawg rigged weedless tailing his 3/4-ounce Strike King Tungsten Carolina weight and a 4- to 6-foot 17-pound leader. The heavy weight enables him to keep his lure where it needs to be. His second choice is a 5-inch Strike King KVD Caffeine Shad. Tube jigs also come into play. Preferred colors are green pumpkin and watermelon.

“A drop-shot catches a lot of these fish, too,” Davis adds. “It’s always one of my favorites on these late spawners. Other rigs work well, too, mostly ‘finessy’ stuff.”

A wacky-rigged stickworm, a 4-inch Strike King Ocho, is his preferred dropshot bait. He opts for a dark color such as green pumpkin and couples it with as light a weight as he can get away with.

Davis cites one more set of tools as the spawn winds down.

“I catch a lot of fish on the Strike King KVD 2.5 Wake Bait,” he says, emphasizing the importance of a medium-speed retrieve. “I add a feathered #2 treble hook trailer. In the late spawn, it’s awesome. It casts well and catches the ones that are coming and the ones that are going. It kind of catches them all.

“That waking action often prompts the first topwater action on the lake.”