MASTERS SERIES: John Murray on the Versatility and Effectiveness of the Drop-Shot 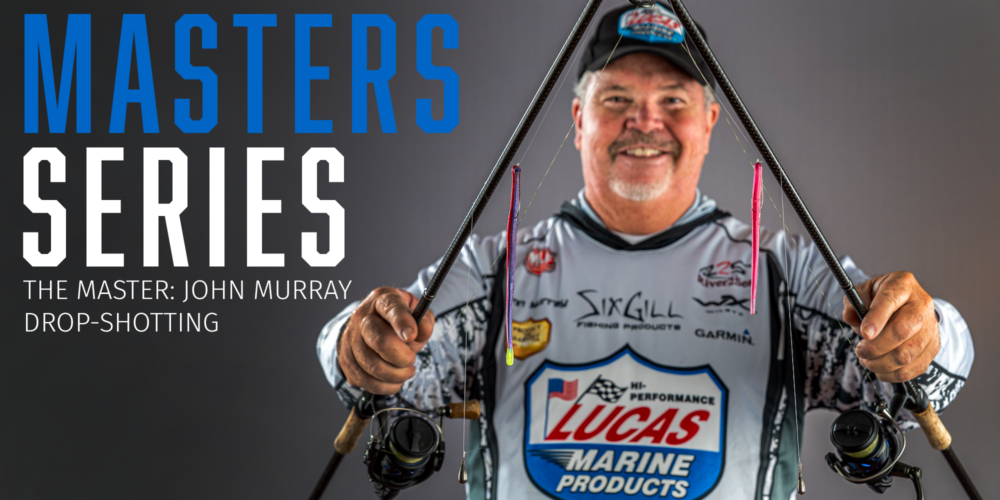 If you put limits on when and where you use a tactic – like drop-shotting – you’re just putting limits on yourself and on your knowledge and skills with that technique. There’s no better way to learn and to catch a lot of fish than by realizing that there are no limits; just restrictions we put on ourselves as anglers.

If you put limits on when and where you use a tactic – like drop-shotting – you’re just putting limits on yourself and on your knowledge and skills with that technique.

I first heard about drop-shotting in the late 1990s, and I have to admit that I dismissed it at first. I thought it was a light-line, finesse technique that was only good for numbers – a small bass method. Of course, my goal in tournaments is to catch bigger-than-average bass, so I figured drop-shotting was something I could ignore.

Then, in 1999, I was fishing a tournament on Lake Oroville in California and Japanese angler Seiji Kato pulled up. I had caught a fish or two on a jig, but nothing special. Kato came in and caught a bass on every cast. I started to look at the technique very differently. A couple months later, on Lake Pleasant in Arizona, I was in another tournament and throwing a big jig with little success. Brett Hite pulled up and caught a limit practically under my boat. That’s when I added drop-shotting to my arsenal.

Brett had learned the technique from Aaron Martens at an earlier tournament. Brett showed me what Aaron showed him, and he took me shopping for the gear I’d need. I quickly realized that drop-shotting was not just a numbers technique – that you could catch big fish on it, too. I’ve been a drop-shotter ever since.

I think the primary virtue of drop-shotting is that it catches fish for you. With other soft plastics methods, you have to provide all the action, detect the strike and set the hook. With a drop-shot, the fish does a lot of that for you. When you fish a drop-shot like I do, sharp hooks will almost set themselves.

In 2003, I won the Bassmaster Open Championship on Toledo Bend Reservoir (Louisiana-Texas) and drop-shotting was a huge part of that win. You think of Toledo Bend as a power-fishing lake, but each morning I was able to get a good starting limit on a drop-shot. Without those fish, I never would have won the tournament.

Drop-shotting is such a versatile technique that there really is no peak time to use it. It works all year long, every season on the calendar, and for every kind of bass. I absolutely always have a drop-shot rigged up and ready to go every time I launch my boat.

If you develop some good drop-shotting skills, you can catch bass virtually anytime, anywhere, from California to Florida and Washington to Maine. It’s even a great method when you’re fishing dirty water. It’s always a viable technique, though it may not be the best technique under some conditions.

Drop-shotting is such a versatile technique that there really is no peak time to use it. It works all year long, every season on the calendar and for every kind of bass.

My go-to drop-shot rod is a 7-foot, 2-inch Sixgill Scythe spinning rod (SCYTHS702M). It’s rated as medium action, but it’s very close to medium-heavy, and it allows me to get a good hook set on soft plastics that I’m rigging self-weedless rather than with an exposed hook.

My reel is a Sixgill Dreadnought Series 2000 spinning reel with a 5.2:1 gear ratio. I spool it with 10- or 12-pound-test Berkley Nanofil as my main line and I use a surgeon’s knot to connect it to a 4- or 5-foot length of 10-pound-test fluorocarbon. My leader – the length from my bait to the sinker – is usually 10 to 12 inches. This is the combo I use for about 80% of my drop-shotting. If I’m using an exposed hook rig, I’ll go to a slightly lighter rod.

I use Ark Fishing No Chip Tungsten Tear Drop-shot Weights and Ark Skinny Drop-shot Weights (cylinder shaped for grass). About 75% of the time, I’m using a 1/4-ounce sinker, but I’ve gone as heavy as 1 1/2 ounces in deep water or heavy current.

My hook is an old-school Gamakatsu offset worm hook that I’ve used a long time with a lot of success. A lot of great drop-shotters – such as Martens – like a straight-shank hook, but that offset hook has been good for me.

I use three basic baits when drop-shotting: a Roboworm Straight Tail Worm (4 1/2 to 7 inches), a Berkley Maxscent Hit Worm or Flat Worm, and a 4-inch Keitech Easy Shiner. I generally like natural colors for all of them, but will go to extremely gaudy colors in dirty water.

Straight-tail worms like the Roboworm are my bread and butter when drop-shotting. I like the Maxscent baits when the water’s cold. I think the scent really helps in cold water. I use the Easy Shiner with a heavy sinker in deeper water and just reel it steadily back to the boat, almost like crankbait fishing.

If I’m in Florida or somewhere with a lot of shallow grass, I like a Zoom Finesse Worm or Trick Worm in June Bug or Red Bug. It’s done really well for me.

A lot of people think of drop-shotting as a vertical technique, but I rarely just drop the bait under my boat. With today’s modern forward-facing sonar, I’m usually making a long cast out on a point or flat and letting the bait go to the bottom. From there, I like to drag it back to the boat. I shake the bait very little. Dragging it across the bottom gives it plenty of action and keeps it looking natural.

I’ve seen several times that the length of the leader made a big difference. I generally stick with 10 to 12 inches, but there have been a couple of instances when another angler in my boat using a much longer or shorter leader caught a lot more fish than me until I matched their leader length. Nevertheless, I generally start at 10 to 12 inches and only change if that’s not working. And I’m much more likely to experiment in tournament practice than I am on a competition day or when I’m out fun fishing.