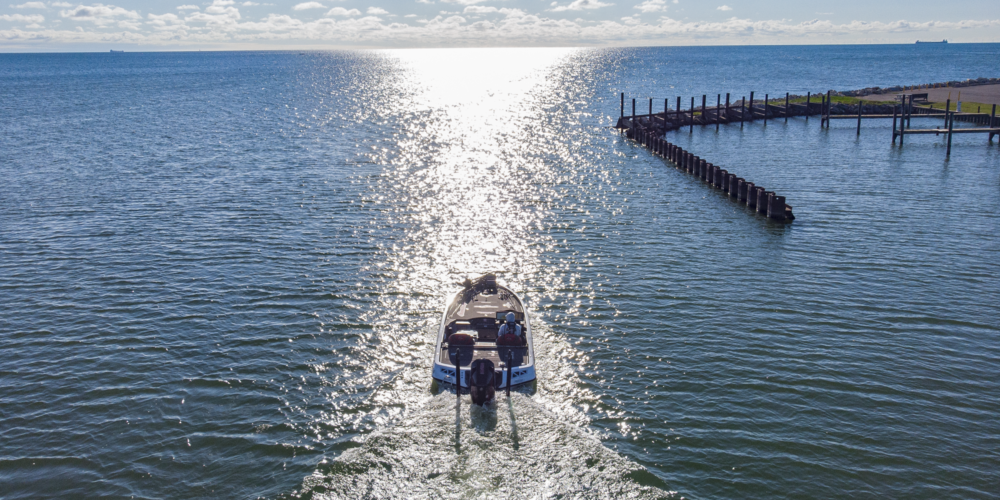 ST. CLAIR SHORES, Mich. – As he headed out for the second day of practice of the final Bass Pro Tour event of the 2021 season – Carparts.com Stage Seven Presented by Covercraft – Mercury Pro Team angler Boyd Duckett summed up one of the major challenges facing the 80 pros competing on Lake St. Clair and surrounding waters: “Where can a guy get out of the wind and find enough fish to survive?”

Duckett spoke those words while a relatively gentle 5-mph southwest breeze blew over the 9 Mile Boat Ramp, but the wind forecast calls for potential 25- to 30-mph gusts and a couple of days of sustained winds in the 15- to 20-mph range during the six-day competition. That spells trouble for anglers looking for groups of fish out on the wide-open expanse of the American side of Lake St. Clair proper.

“It’s just about impossible to find fish when the wind is blowing that hard,” Duckett said. “You’re out there with waves coming over the bow, getting beat around all day long. It can make St. Clair a pretty tough bet.”

Those same winds dogged the field throughout the first day of practice, which saw anglers scurrying to find fish and clear water.

“Man, it was rough,” Mercury pro Edwin Evers admitted as he headed in after practice. “When I say ‘rough’ I mean rough as in not many bites, and the water was rough. (The wind) made everything milky, too, the water is off-color.”

Tournament boundaries for Stage Seven include American waters in Lake St. Clair and the St. Clair River to the mouth of Lake Huron to the north; the southern boundary includes the Detroit River and all Michigan waters of Lake Erie.

St. Clair and Erie are, of course, the safest bets for the sheer number of 2-plus-pound scorable smallmouth that it will likely require to make it into the Championship Round. But per Duckett’s observation, surviving the Qualifying Rounds may require some scurrying: Wind forecast calls for the highest sustained winds of the week – starting at around 17 mph at launch and building to 25 mph by early afternoon – for Group B’s first qualifying day (Saturday, Sept. 11).

Those winds could very likely bring the St. Clair largemouth population into play in the more protected waters inside competition boundaries.

“There’s a lot of (largemouth) in this system, I wouldn’t be surprised if they come into play this week,” Duckett said. “A day like (Saturday), you’re really just trying to find enough fish to survive the round. I think you’re probably going to see plenty of guys in the rivers on those days (that it blows hard).”

Mercury pros Ott DeFoe, Jacob Wheeler and Brent Ehrler are in a three-man footrace to the finish for Angler of the Year honors. DeFoe is the AOY leader heading into Stage Seven with 430 points. Wheeler (418) and Ehrler (413) trail close behind.