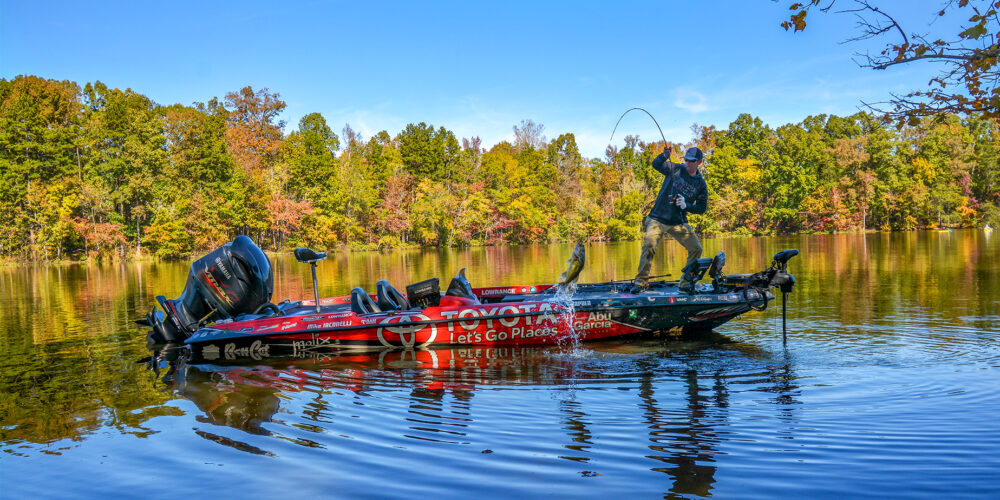 This blog is going to be mostly theoretical. Instead of talking about lures and tackle, we’re going to look at how bass move as the fall season comes and goes. The reason for that is that we can catch a ton of them at this time of the year if we can find them.

No matter all of what I say today, however, it’s important to keep one thing in mind: The fall is about BAITFISH! MATCH THE HATCH!

I want to start with a brief definition of fall. The air temperature is dropping. The water temperature is dropping. The days are getting shorter. The sun is at a lower angle in the sky. And, the leaves are losing their green color in favor of brown, yellow, orange and red. It’s not about the calendar. It’s about the natural cycle of things, Mother Nature and instinct.

The first phase of the fall movement I call the early fall transition. The fish are leaving their summer patterns and moving into their fall patterns. This is usually when you see water temperatures dropping from the middle or high 80s down into the middle or lower 70s.

What happens is that, as they move shallow, they follow predictable and well-defined paths. Nothing is random about this, and it’s keyed to the baitfish movement. In fact, I’ll go so far as to say that baitfish location and movement trumps all the other factors that we usually consider.

In general, this baitfish movement is shallow, or shallower. The bass follow along with them. Look for creeks, pockets, shallow shoals, humps and sometimes shallow flats. When I’m fishing during this period I’m looking for stopping places along those paths. Almost always that’s a place where something sticks out on the path.

That might be a hard or soft point, a big rock, a big stump or a giant laydown. It might even be a point made by weeds. What it is isn’t all that important. What is important is that it sticks out from their travel path. You could say that it gets in their way as they move shallow. It breaks the contour line.

The second phase — the one that’ll make you smile — is the fall feed. It’s characterized by a sharp drop in air and water temperature along with short and noticeably cold days.

The baitfish and bass have moved along the same paths but they’re back to the shallowest water that’s holding baitfish. There’s no movement here, or transition. They’re where they want to be to feed heavily and get fat for the winter. They’re piled up and eating like crazy.

This is when you can catch them all day with almost any lure in your boat so long as it matches the hatch as to what they’re eating.

The third phase, and the last one, is what I call the late fall migration. This is when they’ve had all they can eat and the conditions are getting tough. It’s really cold now and there’s very little relief from it. The bass have turned around and are heading out to their winter holding patterns. That’ll be different from one lake to another, but those differences don’t make any difference.

The reason it doesn’t make any difference is because no matter where they live they’ll follow the same path back out that they followed to get in. It’s that simple. Just follow them back out along the same exact path while you look for things that are sticking out along their path. And, when they stop, it’ll be on the same places. They don’t look for new ones. They operate on instinct, habit. New is not something they deal with, care about or want.

OK, that is how I breakdown the fall. For our purposes, we’re dealing with the early fall transition or the fall feed right now and on through October and into early November.

With that in mind, I’ll briefly mention a few lures that will help you load the boat as this all happens. They’re mostly numbers baits, and just like I’ve said over and over, remember to pay attention to the baitfish and match the hatch in your local waters.

In my last three blogs, I wrote about the Shallow Shad Rap, soft plastic jerkbaits and the A-Rig. They’re quality baits that I’ve used for years. Review those blogs in detail. Make sure you get the right ones, in the right sizes and the right colors that match your local forage. If you do, they’ll be perfect.

Next time, I’m going to give you three different lure choices that’ll help you put a giant in your boat.