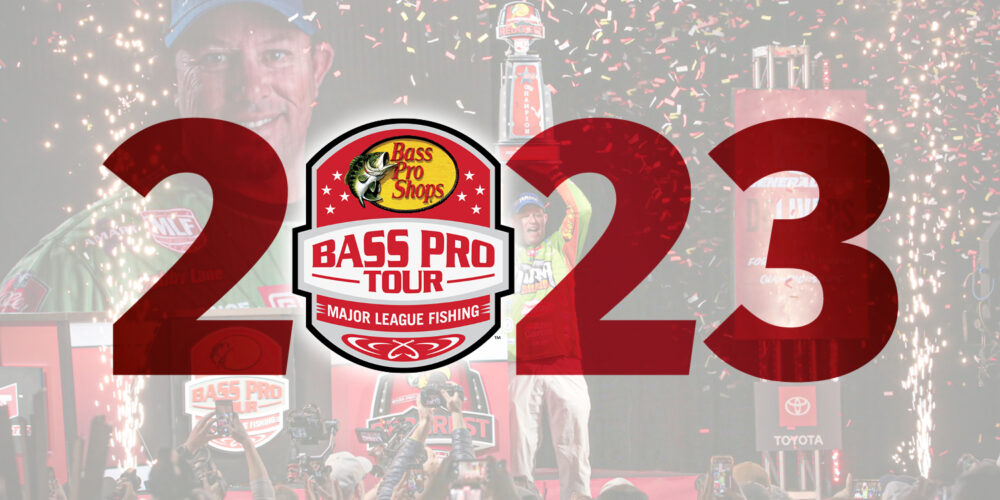 TULSA, Okla. – Major League Fishing announced Friday the schedule for the 2023 MLF Bass Pro Tour. The fifth season of professional bass fishing’s most prestigious circuit will showcase 80 of the top bass anglers in the world competing in seven regular-season tournaments around the country for millions of dollars, valuable points in the Bally Bet Angler of the Year race, and to qualify for REDCREST 2024, the Bass Pro Tour championship, and the annual General Tire Heavy Hitters all-star event.

The 2023 Bass Pro Tour kicks off with Stage One on the Kissimmee Chain, in Kissimmee, Florida, Feb. 13-18. Giant largemouth are always a possibility on these famed Florida fisheries, and this event will mark the Bass Pro Tour’s third time to compete on Lake Toho and the Kissimmee Chain. The venue hosted the circuit’s first ever event in early 2019.

Already announced earlier this year, REDCREST IV will take place March 8-12 on Lake Norman in Charlotte, North Carolina. The five-day championship will feature the Top 40 anglers from the 2022 Bass Pro Tour season competing for the REDCREST Championship trophy and the sport’s top prize of $300,000. In addition to the championship event, the MLF Outdoor Sports Expo featuring hundreds of exhibitors and activities for fishing fans of all ages will be held March 10-12 at The Park Expo & Conference Center in Charlotte.

Stage Three will take place April 2-7, on the “Jewel of South Carolina,” Lake Murray in Columbia, South Carolina, host to numerous major bass fishing tournaments and championships over the years. Stage Three will mark the Bass Pro Tour’s first foray onto the 50,000-acre reservoir. Fans can expect to see some classic late spring patterns in play. Bass will likely be caught in all three phases of the spawn. Bream beds, the shad spawn and fry guarders are all expected to play a role on Lake Murray in early April.

After an extremely successful event in 2022 that showcased the Northern Louisiana fisheries to a global audience, the Bass Pro Tour returns to Caney Creek Reservoir and the Bussey Brake Wildlife Management area in Monroe, Louisiana, April 24-29, for the fourth annual General Tire Heavy Hitters all-star event. Numerous Bass Pro Tour records were set at the venue in 2022, including Randy Howell weighing in the largest bass ever caught in Bass Pro Tour competition – a 12-pound, 14-ounce giant. Although this event will be held during the postspawn, it’s a safe bet that fans will still see a few behemoths weighed in on the MLF NOW! livestream.

From Louisiana, the Bass Pro Tour travels on to Alabama’s Lake Guntersville for Stage Four out of Guntersville, Alabama, May 16-21. Alabama’s largest lake – 75 miles long and covering more than 69,100 acres – is no stranger to major bass tournaments as the venue hosts hundreds of tournaments each year and has for decades been considered one of the best largemouth lakes in the United States. An emergence of eelgrass in recent years has replaced a lot of the milfoil and hydrilla the fishery was once known for, but with bass so spread out, viewers can expect to see numerous different tactics in play.

For Stage Five, the Bass Pro Tour will return to Union Springs, New York, and Cayuga Lake, June 6-11, for a historic occurrence – the first major professional bass fishing tournament ever held prior to the traditional start of bass fishing season. The unique Bass Pro Tour format of catch, weigh, photograph and immediate-release fits within the definition of catch-and-release angling season for black bass in the New York State Department of Environmental Conservation regulations and guidelines and has been approved by the DEC. Though traditional bass season doesn’t officially start until June 15, catch and release season runs from Dec. 1 through June 14. Like the 2022 Bass Pro Tour event on Cayuga Lake, expect huge quantities of both largemouth and smallmouth bass to be caught at Stage Five, as the tournament could be won on either species – or a mixture of the two.

The Bass Pro Tour wraps up the 2023 season on big waters – first with Stage Six at Lake St. Clair in Harrison Township, Michigan, June 24-29. The Bass Pro Tour visited Lake St. Clair in 2021, when pro Michael Neal set numerous Bass Pro Tour records, including the heaviest two-day Qualifying Round total ever weighed and the heaviest Championship Round total ever weighed. Although that event was held a little later in the year, fans can still anticipate excellent fishing in this June event. Most of the bass will be postspawn and well into their summertime patterns, but a few stragglers could still be found on beds. Four-, 5- and 6-pound smallmouth bass are seemingly everywhere, making Lake St. Clair one of the best bronzeback fisheries in the world.

The 2023 Bass Pro Tour season finale will take place Aug. 1-6, with Stage Seven at Saginaw Bay in Bay City, Michigan. Both largemouth and smallmouth bass will be in play for Bass Pro Tour anglers, as the Michigan fishery is known for trophy-sized specimen of both species. The fishery remains a bit of a mystery to a lot of fans and anglers alike, as MLF does not have any tournament history on this bay and tributary of Lake Huron. With valuable end-of-year Bally Bet Angler of the Year points, and REDCREST and General Tire Heavy Hitters qualifications up for grabs, expect to see the most stressful, intense competition of the season.

“We are proud to announce our 2023 Bass Pro Tour schedule, bringing these top-level events to new fisheries and returning to a few venues that have hosted some of the greatest events in our Bass Pro Tour history,” said MLF Vice President of Strategic Planning, Michael Mulone. “The success of the Bass Pro Tour is due in large part to an incredible host organization and sponsorship base, which allows us to provide a stellar tournament schedule year in and year out. We appreciate their support and expect that 2023 will be the most competitive and fun season that we have ever had.”

Each stage of the 2023 Bass Pro Tour will feature six days of competition using the catch, weigh, immediate-release format, broadcast live on MLF NOW! and streamed to the Major League Fishing app, MyOutdoorTV (MOTV), and at MajorLeagueFishing.com.

The 2023 MLF Bass Pro Tour will air on Discovery Channel beginning in July 2023.

The full 80-angler roster will be officially announced later this fall.