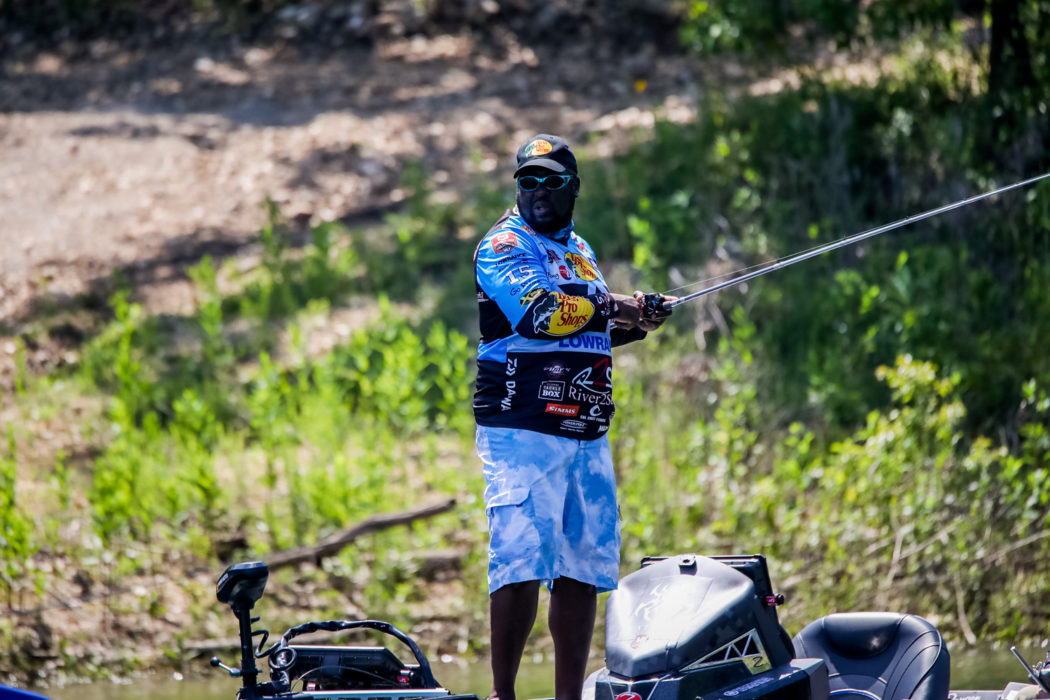 Ish Monroe on the hunt for big bites at Table Rock Lake. Photo by Josh Gassmann

You never get a second chance to make a first impression, except for this coming week when the 80 pros on the MLF Bass Pro Tour return to Table Rock Lake for the Bad Boy Mowers Stage Seven Presented by Covercraft. The anglers will get another crack at the southwest Missouri lake and will try to avoid the mistakes they made during Stage Six last week.

Ish Monroe finished 77th place at Stage Six and had a hard time figuring out what he needed to do to get bites. Monroe caught 13 bass for 21 pounds, 11 ounces in his Shotgun Round, but was only able to add 20 more pounds to his total weight in the Elimination Round.

“The first day I feel like I had enough bites to make the cut, but my second day was just really tough,” Monroe explained. “That tells me that I wasn’t on the right pattern, so I’m just trying to get what I did wrong out of my head. I’m still trying to figure out what I’m going to.”

Randy Howell was able to secure a spot in the Knockout Round during Stage Six but could get through to the Championship Round, finishing in 32nd. Howell caught many of his fish on the morning shad spawn in the first couple of rounds, but once the Knockout Round rolled around, something changed.

“The shad were spawning everywhere I had caught fish during the Elimination Round near some docks, but there were no bass anywhere around them,” Howell recapped. “I still don’t know why that happened, but I never got it going in the Knockout Round because of that. It’s just another one of those things in bass fishing that drives you nuts. You never know why the bass do what they do and why they don’t do what they don’t do.”

While Monroe isn’t quite sure what he was doing wrong, Howell has a little bit of a better idea of how he could improve. The changing weather conditions all week may have messed with the Alabama pro’s bite.

“I think I tried to make fish bite in the super clear water,” Howell critiqued. “The problem with that is that those fish in the clear water are the most finicky fish because they change as the conditions change so quickly. When I got into more colored water I had more success so I think I might need to focus on that.”

The location may not be changing from Stage Six to Stage Seven, but the time frame sure will. MLF announced that the pros will begin fishing at 12 p.m. instead of 6:30 a.m. That also means that they will finish their days at 8 p.m. rather than 2:30 p.m. That shift in time offers many different variables the pros will need to account for.

One of the biggest adjustments will be the lack of an early-morning shad-spawn bite that was so plentiful in Stage Six. We saw just how important that shad spawn was for multiple anglers throughout the week, but that will change in Stage Seven according to Monroe.

“You’re not going to go into the first period and some guy already has 40 pounds on already,” Monroe said. “That last period we’re going to have from 5:30 to 8 p.m., when all the local pressure is gone, the fish are just going to be chewing and biting really well I think.”

Missing out on the shad spawn is alright with Howell as well.

“I love late-afternoon fishing because now that we’re in the post-spawn time frame of the year, that afternoon bite really picks up,” Howell explained. “I think we’re going to see some things we’ve never seen before and different techniques. I think the topwater bite will really come into play as well.”