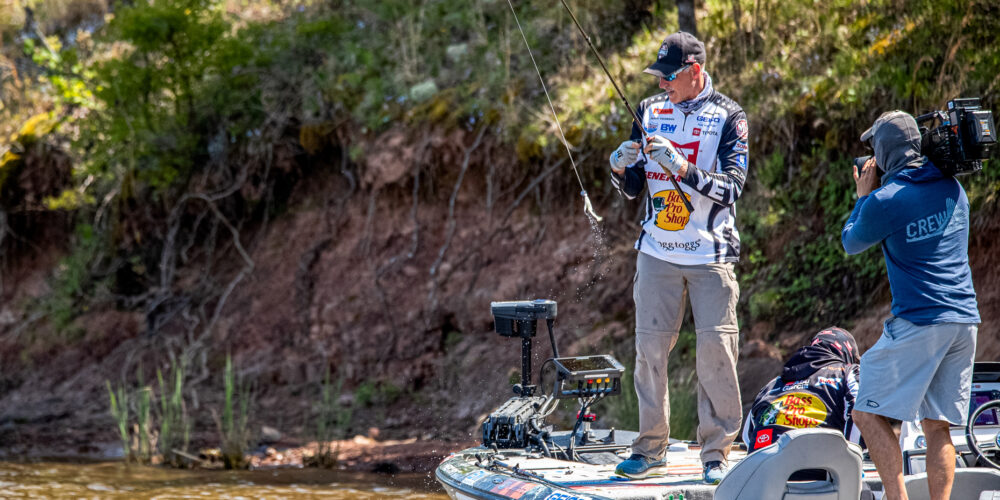 RALEIGH, N.C. – Eighteen anglers put their boats in the water on Shearon Harris Reservoir this morning for the Knockout Round of General Tire Heavy Hitters Presented by Bass Pro Shops, but only eight are moving on to meet Fletcher Shryock and Bryan Thrift in the Championship Round. This North Carolina power-plant lake provided plenty of opportunities for anglers to not only move their way up on SCORETRACKER®, but also with multiple chances at landing a big bass worth $50,000.

Andy Morgan ended the Knockout Round on top of the field with 15 bass for 46 pounds, 11 ounces. The Tennessee pro edged out second-place Jacob Wheeler by 5-5, but Wheeler added $50,000 to his bank account after catching the Berkley Big Bass of the day. Wheeler brought in a 7-8 largemouth that earned him a nice bonus as he fishes for potentially another $200,000 on Wednesday.

Morgan Rides a Hot Area to Round Win

Morgan explained to the MLF cameras after his round win that all of the bass he caught today were either from a 1/2-ounce Strike King Thunder Cricket with a Zoom Swimmer or flipping a Zoom Brush Hog with a 1/4-ounce weight. Those were all he needed to secure another trip to the Championship Round.

“I used that Thunder Cricket when I could tell the fish were feeding,” Morgan recapped. “I caught some spawners on that, too. Most of the spawners I caught flipping, though. I found the right area that I had all to myself and stayed there all day.”

Morgan stayed consistent all day and never went more than an hour and a half without registering a scorable bass. While there weren’t many big bites for him, Morgan believes that the area he found has plenty of potential for big spawners that he can have all to himself.

“The fish I found were in the back of a bay with off-colored water,” Morgan explained. “I knew I wanted to find a bigger area and stay there all day instead of running from little pocket to little pocket like I knew everyone else was going to do. I’ll start off doing the same thing tomorrow and hopefully, it pays off again.”

Wheeler takes home the big bass honors in the Knockout Round thanks to a bedding 7-8 he caught in Period 2. It wasn’t the biggest bass we’ve seen this week, but Wheeler knew when he saw it that it was easily worth $50,000.

“When we pulled up and I saw it, I knew that if I got it in the boat it was going to be the big bass of the day,” Wheeler said. “I watched the Championship Round from Shearon Harris in 2019 the other day, so I knew there’s not a lot of opportunities to catch one well over 7 pounds.”

Wheeler first had to keep shaking off a 3-pound male that was hanging around. Once he did that, it was all about trying to figure out what could get that bedding female to bite.

“I threw just about every color of a 3-inch Googan Baits Bandito Bug at that fish for 45 minutes and it just would not bite it,” Wheeler said. “Finally, I put on a white Bandito Bug and she bit it first thing.”

“I really just feel like I owe this lake a first-place finish,” Wheeler said with a chuckle. “Second in 2019 and second today to Andy Morgan, I’m ready to give this lake a little somethin’ somethin’. Plus, a chance at $200,000 tomorrow is all the motivation you need.”

The 10 anglers fishing in the Championship round are:

The eight anglers advancing out of the Knockout Round will now move on to meet Bryan Thrift and Fletcher Shryock in the Championship Round. The 10 pros will once again fish on Shearon Harris Reservoir, with weights resetting back to zero. A scorable bass must weigh at least 3 pounds and the angler with the most weight on SCORETRACKER® at the end of three periods will claim the $100,000 prize. The big bass bonus for the Championship Round increases to $100,000 as well.

Watch all three periods of the Championship Round on the MLF NOW! live stream beginning at 7:15 a.m EST on Wednesday. Watch for FREE on MajorLeagueFishing.com, the MLF app, or the MyOutdoorTV app.