Murray Gets ‘Back to Center’ for Early Winter Bass

Why bass gather in mid-depths in December, and how to catch them 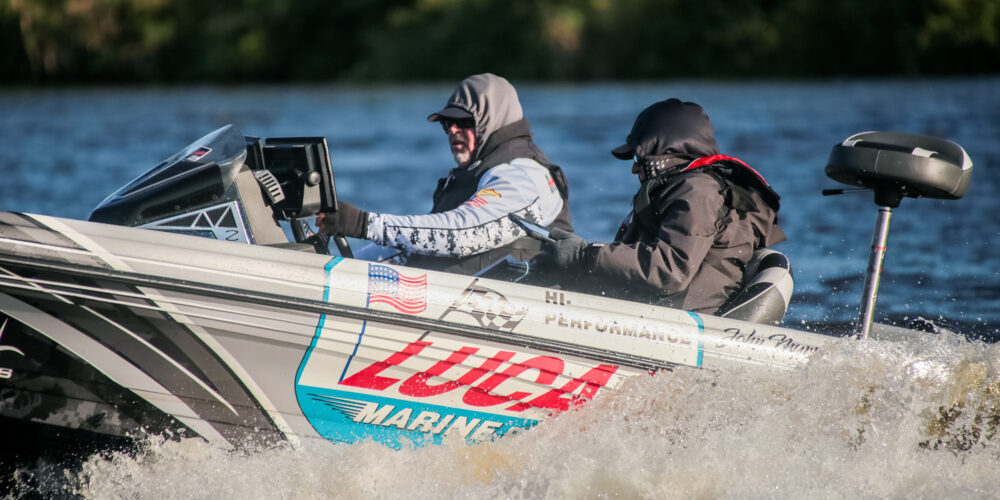 The calendar creeping into winter is often a dreaded time for bass anglers, especially those in northern climates where winter’s arrival signals the end of the season. But for anglers who live in warmer latitudes, the onset of winter brings a welcome break from the sweltering heat and excellent opportunities to catch fish in both size and numbers.

Tennessee pro John Murray relishes the winter bite and counts December as one of his favorite fishing months because he knows it can offer a hot bite when you locate bass.

Getting Back to Center

In most months, there’s a population of bass that reside in shallow water and some who prefer to stay deep. Murray believes that early winter is when both groups tend to meet in the middle.

“I always feel like fall is a time of the extremes: fish will be in very shallow water or way out deep, but once the transition from fall to winter happens, the fish kind of meet in the middle and get back to the center-depth zones,” Murray confirms. “That ‘mid depth’ is different on every lake because they’re following the comfortable water temperatures. But the shallow fish move out deeper after the baitfish and the real deep bass move back up. It’s all about the baitfish and what they’re doing this time of year.”

Murray has witnessed it time and time again where the shallow baitfish begin to move deeper and the deep-water shad push slightly shallower when nighttime temperatures drop to near freezing and the daytime highs hover below 50 degrees.

When that happens, Murray focuses his time on high-percentage places like points and ledges but adjusts his approach.

“It seems like fish always prefer the bottom of stuff this time of year,” he says. “That means the bottom of a creek channel or on the sides of points and in front of ledges. You don’t seem to find as many fish on the tops of these places as much. I think that’s just because they’re sitting a little deeper and waiting for dying shad from the cooler water temperatures to fall to them.”

This cold water feeding frenzy is what Murray looks forward to every year and says it can be a time to catch fish in a hurry.

“I love it in early winter because you can get onto some big groups of fish,” he says. “You’ll catch all kinds of fish species because they’re all there for the shad. If your lake has multiple bass species, it can be a time where you catch spotted bass, smallmouth, and largemouth on consecutive casts.”

Since bass are zeroed in on shad, Murray keeps his lure selection simple and says a jerkbait and blade bait are two must-haves for fishing the fall to winter transition.

“A small blade bait like a Silver Buddy or Damiki Vault is great because they’re so good at imitating shad,” Murray says. “I’m usually using a fairly small one to imitate the smaller size of shad that you normally see this time of year. I’ll cast it out, reel it like a crankbait on the bottom, or slowly hop it along. You can do a lot of different things with it and it’s one of the best baits for that 20 to 30-foot zone.”

For slightly shallower fishing, he’s likely going with a jerkbait and will adjust the model and diving depth based on where he’s fishing.

“Jerkbaits have come a long way, and I have some that dive as shallow as a foot to as deep as 15 feet,” he said. “They’re great baits this time of year as the shad start to die, and I’ll pick the right bait for the depth I want to fish. I’ll start out fishing it pretty quickly, but as it gets later into winter and the water gets colder, my cadence changes, and I’ll let it sit for much longer before working it again.”