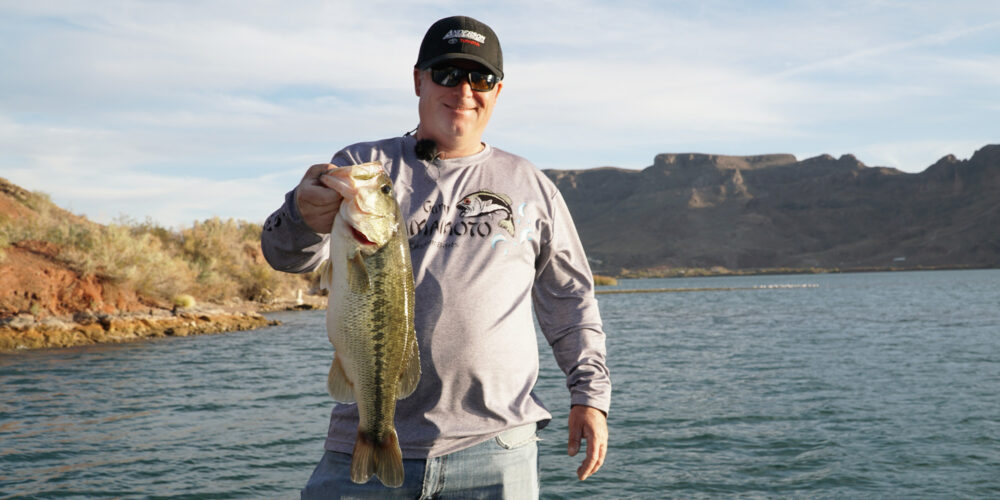 Roy Hawk shares how to be successful on Lake Havasu when the water starts to cool. Photo by Tyler Brinks
December 16, 2020 • Tyler Brinks • Bass Pro Tour

It’s early December and Roy Hawk is spending his offseason keeping busy by fishing lakes around his Arizona home in Lake Havasu City. Like fellow pro Dean Rojas, Hawk is a fan of fishing in the desert and chose to live here full-time to work on his game and prepare for life as a professional angler.

“It’s a great place to live because if I get a new lure or am testing it for a sponsor, I have plenty of places to use it,” Hawk says. “We have a variety of cover, different water clarities, largemouth and smallmouth bass, and you can catch fish on just about any technique you want to here.”

The diversity of the fishery and abundance of bass makes it a perfect training ground for any angler.

We jumped in the boat with him to see how he attacks his home waters when the water starts to cool.

Hawk may have had a difficult 2020 season on the Bass Pro Tour, but he hasn’t forgotten how to catch a bass. This fall, the Yamamoto pro won two boats on desert reservoirs and also finished second in the prestigious WON BASS U.S. Open on Lake Mead, which he also won in 2015.

When it comes to fishing in the desert, Hawk is in rare company and has had tremendous success throughout the Southwest. His recent win on his home lake, Lake Havasu, came immediately after driving straight home for 36 hours from an MLF Cup event in Florida. His team weighed in nearly 50 pounds over two days and cruised to the win; their margin of victory was more than 10 pounds over second place.

That win came via power fishing and moving quickly, but things have changed in the desert in the three weeks since then. The water has cooled, making the bite much more challenging.

“In the fall, it’s all about moving quickly and covering water,” Hawk says. “I’m fishing fast throwing jerkbaits, crankbaits, and ChatterBaits. Cold water is relative to where you live, but when it starts getting into the 50s here on Havasu, you need to slow down and use something with less movement.”

As a general rule, Hawk will use baits with less movement when the water is cold no matter where he’s fishing.

“You don’t want the crazy tail kicking and movement,” he says as he shows a bait. “I like more subdued and subtle stuff like Ned rigs or what I’m doing here. This is a Yamamoto Shad Shape worm on a little 3/16-ounce jighead.”

Hawk casts to a rocky bank and slowly works the bait through the water column.

“You want to keep it hovering right around the bottom and just tick the bottom once in a while,” he says. “I’ll stop it sometimes and then shake it in place before getting it moving again.

Hawk says this approach is perfect for winter fishing on Havasu, but that he’s done it with success all across the country.

“It works great for lakes with spotted bass, too,” he shares. “The biggest key is having some clear water. You want some clarity because there’s nothing else to draw fish in. It’s a visual deal.”

Even on a tough day of fishing his home waters, Hawk was still able to land several quality bass. His joy of catching fish was evident throughout the day.

Even getting into a school of small striped bass caused some excited giggles as he hooked each one. Roy Hawk loves to fish and he’s right at home in the desert.