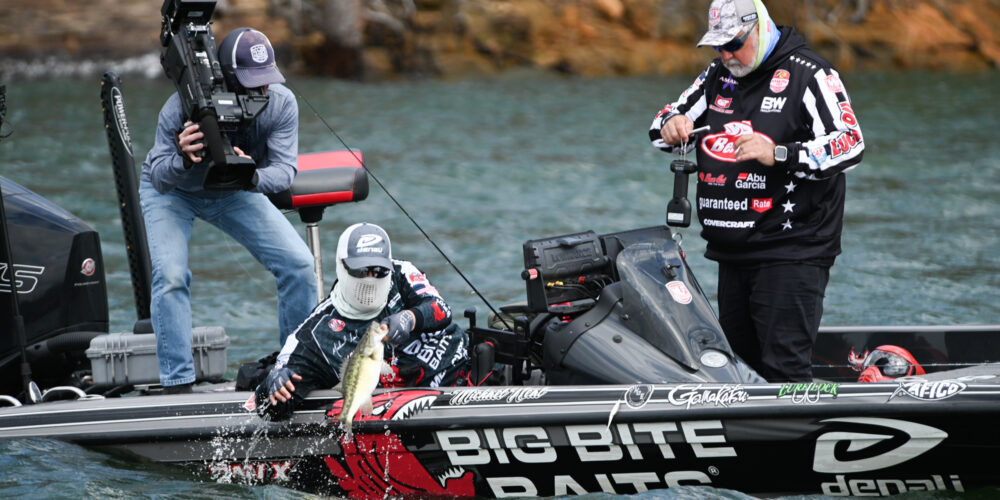 CULLMAN, Ala. – After 7 1/2 hours of competition on Smith Lake and 295 scorable fish weighed, the Top 20 anglers fishing the second qualifying day for Group B at Favorite Fishing Stage Three Presented by Mercury stayed relatively unchanged for most of the day.

The most notable standout was Michael Neal; already the winner of one tour-level event this season (the Sam Rayburn stop on the Tackle Warehouse Pro Circuit), Neal posted 21 bass for 44 pounds even on Saturday, easily winning Group B and advancing to the Championship along with Group A winner Jacob Wheeler.

There was obviously some shuffling of positions throughout the day, but it was a relatively quiet day on Smith Lake for two periods. That all changed in the final period as a battle along the Toro Cut Line erupted and one of the most successful anglers on the Bass Pro Tour made up for a zero-fish showing in Period 1 and 2 by leaping into the Top 20.

If Sunday’s Knockout Round is anything like the final qualifying day of the event, bass fans are in for a treat on Smith Lake before the weather switches gears completely for Monday’s Championship Round.

Neal began the day in fourth place in Group B, 10-14 behind Day 1 leader Todd Faircloth. Neal made up that gap early in the day, gradually built a lead over Faircloth and the rest of the Top 10, and then blew past the field for a 21-1 cushion over second-place angler Fletcher Shryock.

Neal will skip the Knockout Round and make another guaranteed Top 10 finish –  which is both good and bad, according to the Mercury pro.

“It’s definitely worth it to make the Championship Round, but it would also be nice to be able to come back out and try to stay on the fish,” Neal admitted.

Neal clearly has one eye on the approaching weather change, which could alter the bite and shift fish away from his primary area.

“Who knows what the conditions really will be, but it’s supposed to be raining and storming on Monday,” Neal said. “But right now, there’s still a lot of fish here to be caught if I can figure out how to get them to bite and put them in the boat.”

Wiggins the Last Man In

Smith Lake expert Jesse Wiggins was a popular pick for fantasy managers on FantasyFishing.com because of his years of success on Smith Lake. Wiggins hasn’t shown that dominance yet this week. He began the day in 15th place and continued to slowly slip on SCORETRACKER® all day.

Ryan Salzman caught a 1-9 with just over 10 minutes to go, temporarily knocking Wiggins out of the Top 20 and a berth in the Knockout Round. Salzman was ecstatic about that move over the Toro Cut Line and had plenty more bass swimming around his boat following his bait. One more of those would have significantly helped his cause.

“I’m getting to experience being the ‘bubble boy’ and now I see what the Bass Pro Tour is all about,” Salzman said.

His excitement was short-lived as Wiggins had a big catch of his own just moments later, a 3-3 with eight minutes to go.

“I got in by the skin of my teeth, and I hate that it was that close,” Wiggins said. “I caught some good fish but couldn’t get many of them that were scorable. Either way, we made it and I’m now tied for first going into the Knockout Round.”

So far this season, Ott DeFoe hasn’t enjoyed the same dominance he showed last season, where he won two events and finished second in the Angler of the Year race. DeFoe began the season with 35th- and 49th-place showings in the first two BPT events of the season, and appeared headed for another middle-of-the-pack tournament after finishing the first day on Smith Lake 28th in his group.

DeFoe then went scoreless for the first two periods to start the day Saturday before catching fire the final round. The Mercury pro caught all 10 of his scorable bass of the day for 22-10 in the final period, finishing 18th.

The Top 19 anglers from both the A and B groups will head back out on Smith Lake for Sunday’s Knockout Round, where the Top 8 will join Neal and Wheeler in the Championship Round on Monday. Lines are in at 8 a.m. CST. Live coverage begins at 7:45 a.m. CT on the MLF NOW! live stream. Watch for free on MajorLeagueFishing.com, the MLF app, or the MyOutdoorTV app.