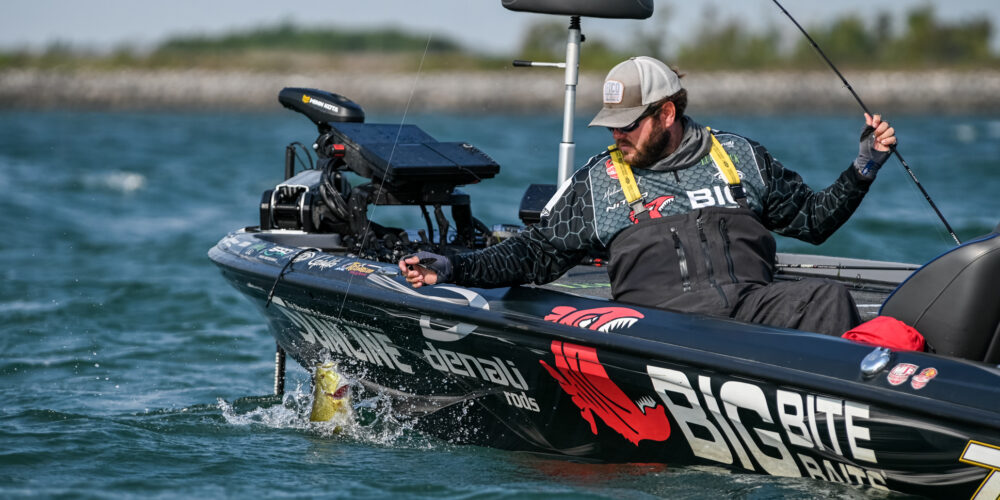 Michael Neal landing one of his 33 bass during his second Qualifying Round on Lake St. Clair. Photo by Garrick Dixon
September 12, 2021 • Mason Prince • Bass Pro Tour

ST. CLAIR SHORES, Mich. – The third day of competition at the CarParts.com Stage Seven Presented by Covercraft ended just as the first day did—with Michael Neal on top of SCORETRACKER® with a massive margin of victory. Pile on new Bass Pro Tour records for highest two-day weight total and biggest margins of victory, and Neal is well on his way to challenging for a new trophy on his 2021 mantle.

The harsh winds that rocked the field during Group B on Saturday subsided for many in Group A on Sunday, leading to more impressive catch numbers of both smallmouth and largemouth.

As Neal advances straight to the Championship Round, 19 other anglers in Group A were able to advance to the next round of Stage Seven—the Knockout Round on Tuesday.

The Field Not Even Close to Neal

Could this event finally be the one where Neal gets a much-coveted win at the pro level?

The Tennessee pro has certainly put himself in a strong position after two stellar days on the St. Clair/Lake Erie system. The Mercury pro dominated Group A field in record fashion, beating out second-place Russ Lane by more than 70 pounds and cementing his spot in the Championship Round on Wednesday. Neal set the Bass Pro Tour record for highest two-day weight total after catching 69 bass for 223 pounds. He also set the Bass Pro Tour records for largest margin of victory in a Qualifying Round and is the only angler to have two Qualifying Round totals of more than 100 pounds.

“It’s been all about smallmouth for me this week because that’s all I’ve brought in,” Neal said after his record-breaking Qualifying Rounds. “I’ve caught them on drop-shots, vibrating jigs, and crankbaits. I had an average fish of 3 pounds for two full days of fishing and that’s a great feeling.”

Neal will now wait until Wednesday before he’s back on the water. He’ll take the time off to get refocused, do some research, rest and change out his hooks on his hard baits. Neal says that he has the Gamakatsu G Finesse treble hooks on his crankbaits and they’ve been a big reason why he’s been able to land so many smallmouth.

While his goal is to catch as many scorable bass as possible, Neal says he can’t help but take a moment and appreciate the man who designed the hook, Bass Pro Tour angler Aaron Martens.

“This is a special hook to me because of Aaron and how much he means to all of us out here,” Neal said. “It’s hard that he can’t be here this week fishing with us but I just want him to know that myself and the rest of the guys out here are thinking about him. His hook has put a lot of fish in the boat for me this week and I can’t wait to see him out here again.”

The Angler of the Year race now comes down to a showdown between Jacob Wheeler and Ott DeFoe. Brent Ehrler was unable to advance to the Knockout Round after finishing in 24th place and 3-7 below the Toro Cut Line. Jacob Wheeler ended his day in third place on SCORETRACKER® and will move on to the Knockout Round. Wheeler needs to finish at least 13 points ahead of Ott DeFoe to win his first AOY title. DeFoe will fish in Group B tomorrow on St. Clair and will begin his second day of fishing in ninth place.

Group B will return to the water Monday morning as the pros will battle to be one of the Top 20 anglers advancing to the Knockout Round. Weather is expected to be similar to Sunday’s contest, with cloudy skies and light winds. Rain is expected overnight in the Lake St. Clair and Detroit area, but should clear up by the time lines are in at 9 a.m. ET.