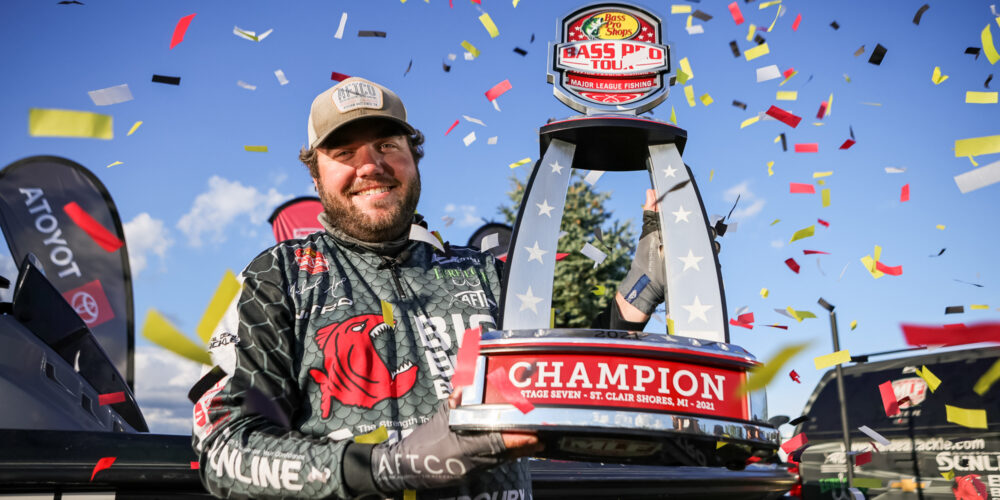 ST. CLAIR SHORES, Mich. – A day after Jacob Wheeler claimed his first Angler of the Year title, Michael Neal grabbed his first pro-level win of his career during the Championship Round of the CarParts.com Stage Seven Presented by Covercraft. Both anglers had long coveted each of the trophies that they will be bringing back home to Tennessee, and while Wheeler was able to celebrate his accomplishment on Tuesday, Neal had to wait an extra day to claim his prize.

It was another day of dominance on Lake St. Clair, the Detroit River and Lake Erie for Michael Neal. The Big Bite Baits pro picked up right where he left off on Wednesday after a two-day break thanks to record-setting performances in his Qualifying Rounds. Neal ended Wednesday with 58 bass for 168 pounds, 11 ounces, separating himself from second-place Alton Jones Jr. by more than 76 pounds. Neal was in a class of his own on Wednesday.

The Sunline pro knows how it feels to come up just short of a victory because he’s no stranger to it. That’s what makes this first win well-worth the wait.

“It feels really good to get the monkey off of my back,” Neal said shortly after being named the Stage Seven champion. “I’ve finished in second place and Top 10 a bunch of times in my career, including this year at REDCREST and at Stage Four at Lake Chickamauga. To get my first win on a smallmouth fishery, a species I’m not entirely confident in catching, is a great feeling.”

Neal caught all of his fish rotating between three different baits—a crankbait, a drop-shot and a vibrating jig. Neal once again thanked Bass Pro Tour angler Aaron Martens for the treble hooks that he helped design—the Gamakatsu G Finesse. Neal claimed that those treble hooks were the main reason he was able to land so many smallmouth this week without a lot of trouble.

While Neal has won before—three Bass Fishing League wins—this is the first pro-level win of his career. The Mercury pro took home the Tackle Warehouse Pro Circuit Angler of the Year title and was also able to surpass the $1 million mark in career earnings in 2021. Add on another $100,000 for his Stage Seven win and that’s not a bad fiscal year. Although the money is quite nice, Neal was most excited about something else the winner receives.

“I’m more excited about getting the trophy than the money that comes with it to be honest,” Neal admitted. “Just to have that hardware with your name on it, no one can ever take that away from you. Money can be spent, but that trophy, I have that forever. It’s coming back with me to Dayton.”