PATTERN INSIDE THE PATTERN: Connell Found the Right Spot (and Pattern) for Smith Lake Win 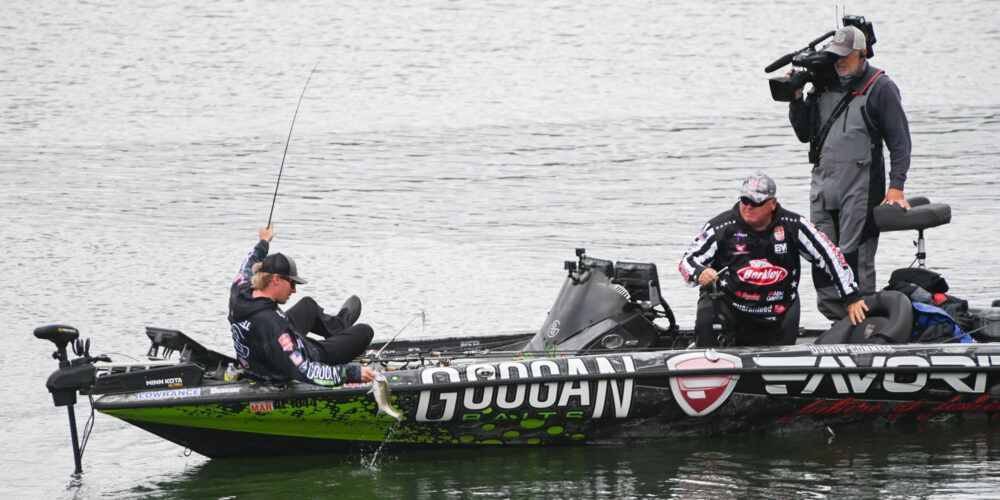 Mercury Pro Team angler Dustin Connell is a threat to win virtually any tournament he’s competing in, but especially when he’s equipped with Lowrance ActiveTarget while fishing on Alabama lakes. The Alabama native won the REDCREST 2021 trophy on Lake Eufaula sniping fish from offshore brush piles while watching them on ActiveTarget, and added a second major ‘Bama win to his resume last week when he won the Favorite Fishing Stage Three Presented by Mercury on Lewis Smith Lake.

To accomplish that task, Connell relied on some old knowledge of the lake, his ActiveTarget, and plenty of fishing instinct and skills with a drop-shot.

“I had full intentions of finding a school or two in practice,” Connell said. “I thought I’d find fish feeding on bait in the drains, but I never found that. The water was rising a lot and the temperatures were too, but the conditions seemed to scatter the fish. I wasn’t quite sure what to do.”

Connell went into the first day of competition fishing docks in Rock Creek. This wasn’t his game plan for a victory as much as it was his plan to survive through to the Knockout Round, where he would hopefully figure something else out.

“Fishing docks wasn’t what I really wanted to do, but I really didn’t have anything else. I felt I could catch enough scorable bass to make it to the Knockout Round, but not win the event. On Day 2 of the tournament, the wind blew really hard. That made it difficult to be efficient skipping baits under the docks.

“Looking at SCORETRACKER®, it seemed like I had enough weight to make it to the next round, so I went practicing. I went looking for something special. I caught a ton of nonscorable fish. It was nothing special, but at least I knew I made the Knockout Round.”

Connell stuck to his guns, initially. He figured a combination of dock fishing and searching for schools of fish would pay off, but the plan didn’t work as expected.

“I had intended to fish the docks, but the water levels dropped a couple of feet and the lake started to stabilize,” Connell said. “In the first 45 minutes, I caught one scorable (bass). I noticed other guys getting off the docks. I’d pan around the docks and see nothing. I pulled the plug then and went practicing.

“I decided to go down the lake and see if I could get on an early prespawn bite. It’s cooler down lake and those fish spawn a little later, so I thought they might be grouped up and feeding on bait with the stable conditions.”

Connell’s next move during the Knockout Round changed the outcome of his Smith Lake experience for the better. He found something special, thanks to some old knowledge from years back.

“I’d use the ActiveTarget and find fish to pitch to, but was still about 4 pounds out of the cut,” he said. “Then I thought about a spot that I remembered from five, six, seven years ago near the dam, so I (left) and made the run to that spot. I pulled up on the spot near the dam and I saw fish. On my first cast, I caught a 2.5-pounder. I went on to catch 20 pounds in the next 45 minutes.”

Connell’s skills with a drop-shot and ActiveTarget then became the key components to build a victory on Smith Lake.

“The conditions set up perfect for it – water pulling down for a day or two,” Connell said. “That created the only current source in the lake, and it grouped them up. One rock ridge the size of a pickup truck I saw on ActiveTarget was where they were holding. I knew I had a chance to win it.”

The rock ledge proved to be the winning spot for Connell. He took the lead early in the Championship Round and stayed there with a school of replenishing spotted bass that most anglers could only dream about. Well, until forward-facing sonar came along.

“On the last day I caught 60 bass total, and weighed about 71 pounds of scorable fish,” Connell said. “I would pitch my drop-shot out and watch how they reacted. I couldn’t catch them if the bait was below them, they only fed coming up. I’d catch a few then they’d disperse. I’d move off of them and come back in 15 minutes to see if they were grouped up again. It worked. Sometimes I’d move off and fish some clay points and pan around and catch a few fish, sometimes over water as deep as 150 feet. Then back to the rock ledge.”

With ActiveTarget, Connell would watch his bait descend and see how the fish reacted to it. He’s become so efficient with the system, he has the ability to customize his retrieve method for each fish he catches.

“I think the biggest advantage of ActiveTarget is that I can see how the fish react,” Connell confirmed. “I’d use a ½-ounce weight on a drop-shot with my Googan Baits Drag N Drop, but it would fall too quickly and they wouldn’t react positively. I switched to ⅜-ounce for suspended fish. I was strictly fishing for each individual fish with what I’m using and I can tell you when they are about to bite. It’s strictly sight fishing with the electronics.”