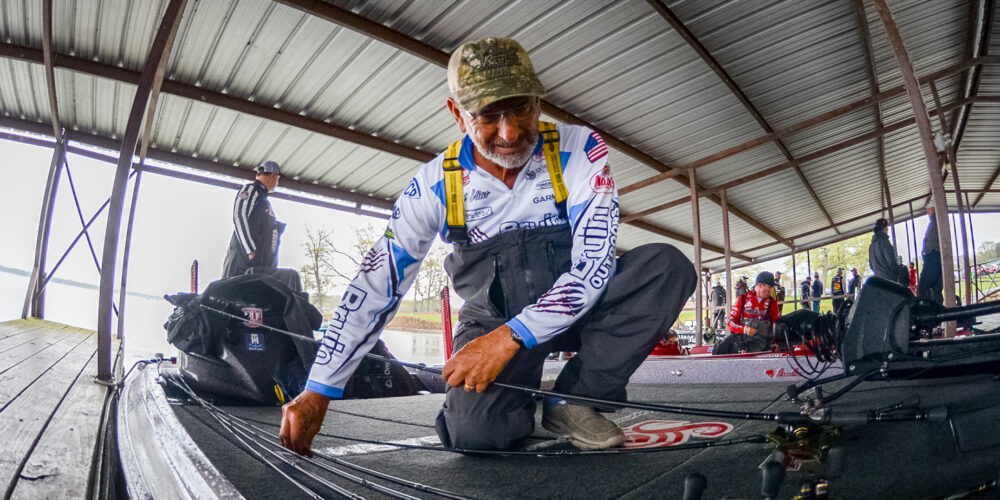 Paul Elias is heading into the 2021 Bass Pro Tour season with a fresh mindset as he looks to "cross the threshold." Photo by Garrick Dixon
November 30, 2020 • Mike Pehanich • Bass Pro Tour

The challenge of moving from a five-fish tournament format to the relentless pressure of catch-what-you-can competition has tested the nerves of virtually every angler on the MLF Bass Pro Tour.

That certainly has been the case for Paul Elias, the Mississippi pro who has etched his name in bass fishing history and the angling record books in dazzling fashion during the course of his career. At age 69, he has, as they say, “seen it all.” No angler in the 80-man Bass Pro Tour field draws from a deeper well of experience to assess the respective challenges professional bass anglers have faced during the sport’s evolution.

But, as the oldest angler in the field, Elias feels more tightly compressed each season, caught between a younger and increasingly talented angler field and the unyielding pressure of Father Time, as manifested in two shoulder operations in 2018.

“It’s been a nightmare for me, in a way,” he admits. “With our new electronics from Garmin and everyone else, there’s always something different to learn. LiveScope (Panoptix) technology is basically video game bassin’. I’m not near as good at it as these young kids. It’s hard for me to keep up.”

As for the transition from five-fish limit competition to the cumulative SCORETRACKER® format, Elias is learning to “fish faster and read water quicker than I’m used to.”

He has faced formidable challenges on every front. But if he should rise to compete once again at an elite level, it wouldn’t be the first time.

Several times during his career, he has come back from winless droughts and strings of out-of-the-money performances to win with eye-popping, tour de force triumphs such as his “kneelin’ and reelin’” Bassmaster Classic win on the Arkansas River and first “all-smallmouth” win on New York’s Seneca Lake.

He set the all-time winning weight record for five-fish tournaments with a 132-pound, 8-ounce total at a Bassmaster Elite event on Falcon Lake in 2008.

And he almost single-handedly lifted sportfishing and the entire tackle industry out of its slump nine years ago with his wire-to-wire FLW Tour event victory on Lake Guntersville and the unveiling of the deadly Alabama rig.

“A lot of the tournaments I’ve won in the past were fishing one or two spots and basically fishing them dry,” Elias admits. “You just can’t do that in the MLF format. You have to cover water and fish the moment more than you do in a five-fish limit tournament. Making that adjustment has been the biggest thing for me. I’ve had to force myself to move on and to fish fresh water I haven’t practiced in…to keep looking and keep grinding.”

Elias was rather unique among his contemporaries in the early decades of his career. While others were prying bass from docks and shallow cover or running and gunning on vegetated flats, his offshore structure mastery was paving the way to landmark wins.

But fishing offshore structure is a riskier gamble within the time constraints and numbers pressures of MLF competition.

After a pair of disappointing seasons, Elias has reshaped his mindset by imposing critical mental disciplines — preparing better, making quicker decisions, learning to fish faster in practice, as well as in competition.

“My main drawback is I don’t cover enough water in tournaments or practice,” he says. “My goal next year is to eliminate or find a lot more water than I’ve been doing. I will really force myself to move on, to do more ‘faster fishing’ than I’m accustomed to doing.”

The shallow-diving crankbait has been the one carryover from his old skill set that has proven consistently reliable in the MLF framework.

Part of his renaissance training has been adding finesse tools to his arsenal.

“I fished the last two days with a friend, trying to get more familiar with the Tokyo rig and the Ned rig, and drop-shot technique…all the lighter line stuff that has come more into play over the last 15 years,” he says. “For the most part, I’ve relied on a heavy style of fishing, power fishing techniques. Now the other end of the game comes into play a lot more. I’ve tried to get better with finesse techniques, more proficient at all of them. I always hated having a spinning rod in my hand, but now I’m pretty handy with it.”

“When I won that first tournament on the finger lakes (Seneca), I wouldn’t have thought of fishing a dock or even fishing close to the bank there,” he says. “I fished deep weedlines and structure. Now a key thing is to fish every dock on the lake.”

Others defer to the veteran’s past success and his earned place in angling history, but, looking ahead to the 2021 Bass Pro Tour season, Elias finds his toughest critic is the guy he faces in the mirror.

“I’m the first to say I’ve jumped into a hornet’s nest with these guys,” he says. “You can’t be a slacker, and I’ve been kind of slacking for a few years. Now I’m really looking forward to next year. I feel I’ve mentally crossed the threshold where I’m now able to compete a lot better.”