Pros Jostling for REDCREST Qualification in Shotgun Round 1 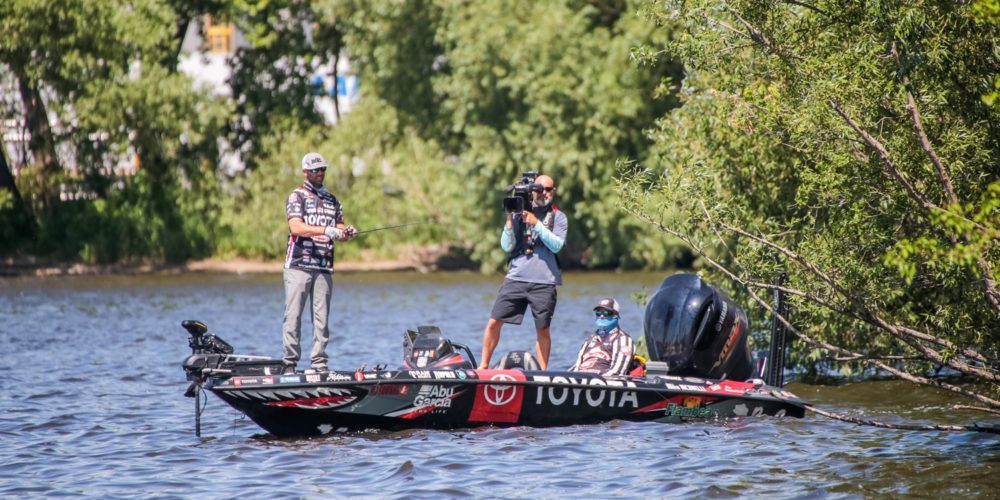 NEENAH, Wis. — The Evinrude Stage Eight Presented by Tracker Off Road got off to a hot start Tuesday with some impressive Shotgun Round numbers. Those Shotgun Round weights will carry over to the Elimination Round on Thursday as the 40 pros in Group A will fight to work their way into the Top 20 for the right to move on to the Knockout Round.

A Stage Eight win would be quite an accomplishment for any angler on the Bass Pro Tour, but a few pros are focused on not only winning $100,000, but qualifying for the REDCREST Championship.

A Dozen Spots Up for Grabs

MLF NOW! analyst Marty Stone said during the live stream on Tuesday that the top 18 pros in the REDCREST points standings are “safe.” In other words, 18 anglers have already locked up their spot for the REDCREST Championship in La Crosse, Wisconsin on August 21. That leaves the remaining 62 pros to duke it out for the remaining 12 spots. In reality, there are only 25 pros that have the mathematical possibility for a REDCREST qualification, and a few were in action during Shotgun Round 1.

Vinson, Iaconelli, Swindle and Jones finished their day inside the Top 20 while the other five pros are currently on the outside looking into the Knockout Round. Iaconelli needs to finish higher than 76th place to qualify for the REDCREST. Every point you can earn this week is critical, and Iaconelli knows that heading into Thursday’s Elimination Round 1.

“A lot of people this week have pressure for different reasons,” Iaconelli explained. “People want to make the REDCREST, make a Cup event or finish the year on a high note. My pressure is to just make the Top 20 in my group. Still, you’re never satisfied. This is the last Bass Pro Tour event of the year and you want to end it with a bang. I want to do well especially after struggling for the past two events on Table Rock Lake.”

Needing to Make a Move

While Iaconelli is sitting pretty, Josh Bertrand needs to make a big move if he wants to keep his REDCREST hopes alive. The Arizona pro sits in 39th place in the overall standings and will likely need a Top 20 overall finish to secure a spot in the REDCREST Top 30. After finishing Shotgun Round 1 in 32nd place with 20-3, Bertrand is already starting to plan what he needs to do to survive Elimination Round 1.

“I probably need to catch 40 pounds to make the cut on Thursday,” Bertrand predicted. “I didn’t have a horrendous day today, but I just didn’t catch enough fish to keep that pace that I needed to. It’s all about surviving the first cut. If I can make it into the Knockout Round, then it’s a whole new ball game.”

Below is a list of Group A anglers that have a mathematical chance of qualifying for the REDCREST and what place they would need to finish to do so:

The 40 anglers in Group A will return to Lake Winnebago on Thursday for Elimination Round 1. Only the Top 20 pros will advance through to the Knockout Round where they will meet the Top 20 pros from Group B. Group B begins their Shotgun Round at 7 a.m. CT on Wednesday. Coverage begins with “lines in” on MajorLeagueFishing.com with SCORETRACKER® and the MLF NOW! live stream begins at 9:30 a.m. CT.