REDCREST 2019: Browning Used SCORETRACKER® to His Advantage in 2019 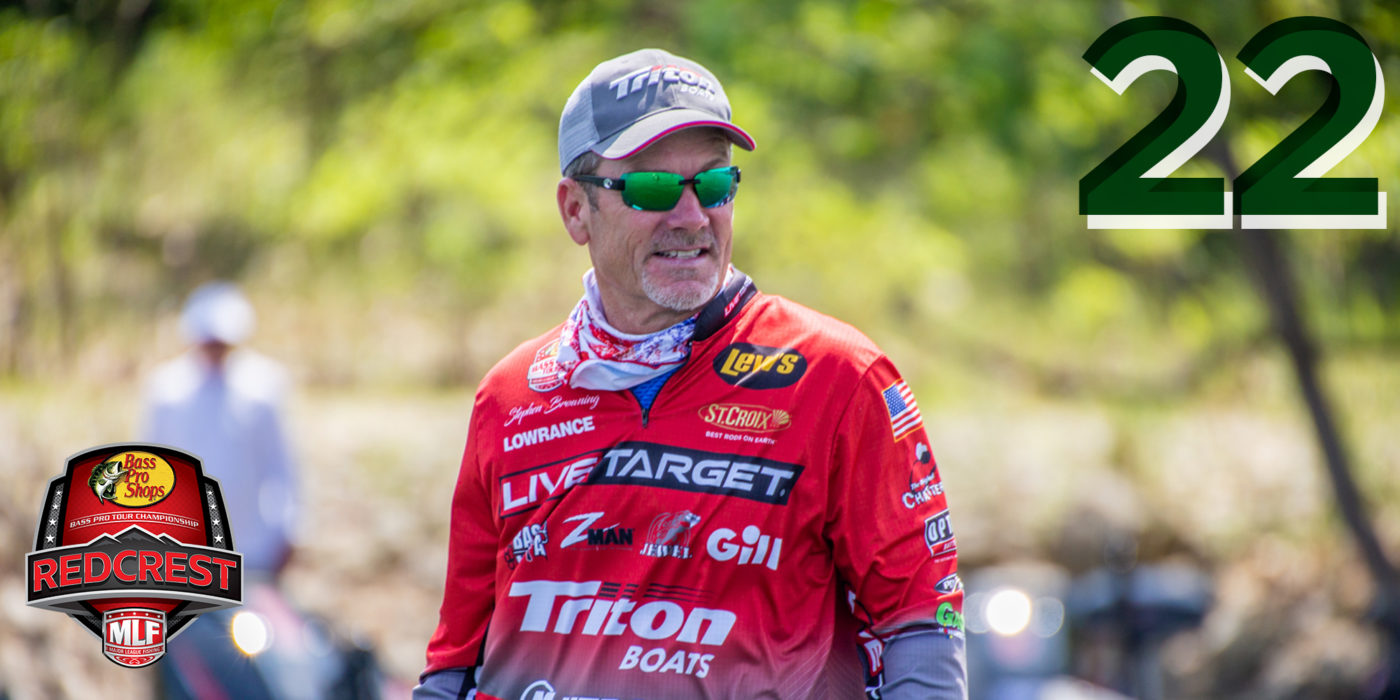 Out of the 30 MLF pros who qualified for the inaugural REDCREST, 10 of them started the 2019 season having never competed in an MLF event. Stephen Browning is one of the pros who heard their MLF official say, “Lines in!” and “SCORETRACKER® update” for the first time on Lake Toho at Stage One of the Bass Pro Tour.

Browning didn’t make it to the Knockout Round during Stage One. He missed the cut by less than 2 pounds, finishing 22nd in Elimination Round 1, 43rd in the final results. You may think that wasn’t a great start to the season for Browning, but you’d be wrong. Ironically, Browning says getting cut that day set him up for a successful season.

“When I left that tournament, I didn’t get a check, but I did come out of there with a lot of confidence and belief in myself,” Browning said. “And I just carried that. I packed it up, put it in a rod box, and carried it with me the whole season.”

During the next event, Stage Two from Conroe, Texas, Browning made the Championship Round and finished 10th. By the time Stage Eight had ended, the Arkansas pro had qualified for three of the four Cup events, and of course, REDCREST. So how did Browning figure out the MLF format so quickly? He says SCORETRACKER® is one of his keys to success.

“I’ve watched it in years past, and the guys that kind of put a couple of baits in their hands and you know, try to live and die by those, normally, they die,” Browning explained. “They don’t succeed and they don’t make the next round. And I took that attitude into this year: Listen to the SCORETRACKER®. Don’t worry about who’s catching them. But just listen to the SCORETRACKER® and let it tell you what you need to be doing. And that’s either fishing for a little bit better quality fish, or just going for numbers.”

Browning says he simply does the math and adjusts accordingly. Looking forward to REDCREST, he’s expecting to hear an abundance of “SCORETRACKER® updates” featuring 2- and 3-pounders.

Browning has history in La Crosse, and is looking forward to competing on the Upper Mississippi with the MLF format.

“I’m super stoked that it’s on a river system, I really feel like it should play right into my wheelhouse,” he said.

Another one of Browning’s keys to success is staying positive. In his mind, he’s never really “out of it” until the last cast of an MLF competition. That attitude, paired with his high-energy personality, makes him a very entertaining angler to watch on the MLF NOW! live stream.

“Just the excitement of being there in the moment, so to speak, is just a good feeling,” Browning said, “I scream and holler at the fish and myself and all that, but that’s just who I am. I mean, I do that when I’m fishing alone by myself.”