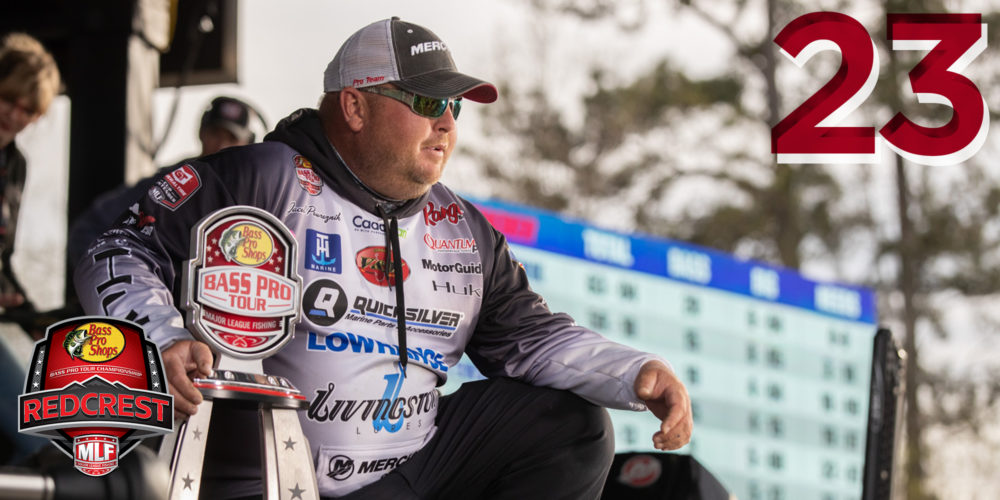 Jacob Powroznik will be looking for a second trophy to add to his mantel when REDCREST begins. Photo by Josh Gassmann
July 29, 2019 • Joel Shangle • Bass Pro Tour

The 43-pound red-and-silver trophy from Bass Pro Tour Stage Three rests comfortably on the mantel of Jacob Powroznik’s living room in Prince Georgia, Virginia, a daily reminder to the MLF pro of his championship day on Shearon Harris Reservoir in North Carolina.

“There’s only going to be one first REDCREST trophy, and I have room for it on my mantel,” Powroznik joked. “I’m honored to have made it to the first REDCREST we’ve ever had, but I’m going up to La Crosse with one goal in mind: I want to be THE guy who wins that trophy.”

And it’ll be hard to bet against Powroznik when the action gets started August 21 in the Opening Round of REDCREST 2019. The Mercury pro finished second at the last tour-level event he fished on the Upper Mississippi River – a 2018 Elite Series event won by Ish Monroe – and believes that the perpetually moving water of the Upper Mississippi suits his style well.

“Almost all of the fishing on that river is about current, and that’s something I’ve fished my entire life,” said Powroznik, pointing to the James River in Virginia as his training grounds. “It doesn’t matter what you’re fishing on that river – grass, offshore structure, whatever – almost everything relates to the current. Nine times out of 10, you’re fishing shallow, too, which just suits my style.”

While all 30 anglers competing in REDCREST have had experience on the Upper Mississippi, none of them have ever fished it in MLF’s “every scoreable bass counts” format. That fact doesn’t damper Powroznik’s enthusiasm at all – quote the contrary, his experience there in 2018 hints at the MLF format fitting him even better than did the five-fish-limit format of the past.

“Man, I would’ve given anything to have been fishing REDCREST (in 2018),” Powroznik said. “I was catching anywhere from 60 to 80 fish a day there, every day. It was absolutely insane once I found them and got everything dialed in. There are 2- and 3-pound fish all over that river, but there’ll be certain little key areas that will hold bigger schools of fish. The two times I’ve competed there, I found them in completely different areas each time, so guys will have to spend some time looking for those special areas if they really want to shine at this event. It’ll be an event where you’ll have to find enough spots you can rotate around and catch them steady.”

It’s a puzzle that Powroznik is excited to figure out once practice begins on August 18, and an opportunity to put his name on the list of the greats of the sport.

“I’m extremely happy with my career to this point, but winning REDCREST would really elevate it,” Powroznik admitted. “Winning Stage Three in Raleigh was unbelievable, and I’ll never, ever forget that. But people really remember Greg Hackney winning in Pittsburgh and Mike Iaconelli winning in New Orleans. Twenty years from now, I’d love for people to be saying ‘Hey, do you remember when Powroznik won in La Crosse?’. The payday is great, but that memory and the trophy are what we really fish for.”