REDCREST Was a ‘Tale of Two Sections’ of Lake Eufaula 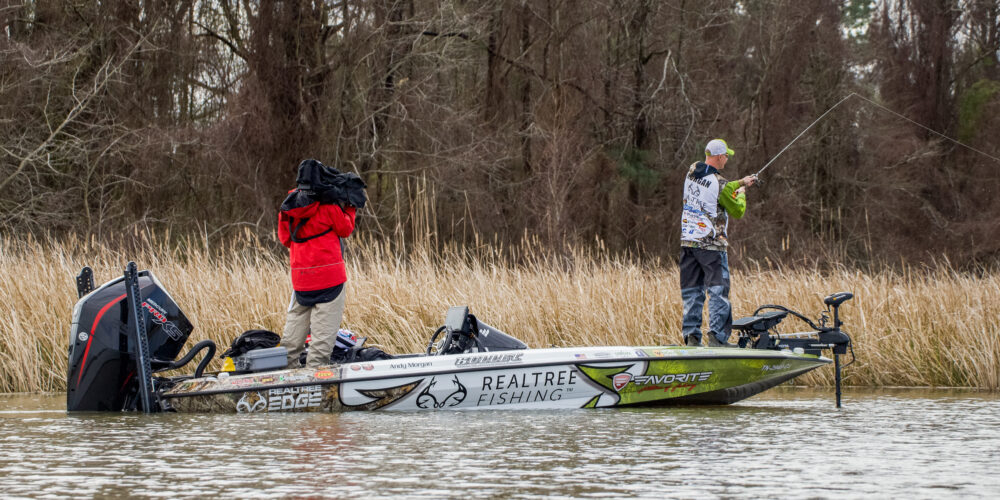 Andy Morgan's pattern on the north end of Lake Eufaula was much different than the anglers fishing toward the dam. Photo by Phoenix Moore. Angler: Andy Morgan.
March 2, 2021 • Tyler Brinks • Bass Pro Tour

EUFAULA, Ala. – One truth about Lake Eufaula that revealed itself throughout the five days of REDCREST is that this impoundment of the Chattahoochee River is heavily influenced by current and water clarity.

In addition to the flow of water from the mainstem Chattahoochee, many major creeks also flow into Eufaula, including the Cowikee, Chewalla, Cheneyhatchee, White Oak, Patula, and many others on both the Alabama and Georgia sides of the river.

A Tale of Two Sections

With plenty of rain in the two weeks leading into REDCREST, the creeks and rivers flowed with plenty of extra color as they poured into the main lake. Consequently, the color of the water was greatly affected depending on where anglers fished.

There was a noticeable difference in water clarity between the north and south ends of the lake, with over 45,000 surface acres and approximately 80 miles of fishable water in between.

Offshore fishing proved to be more prevalent closer to the dam as anglers like REDCREST winner Dustin Connell made hay on the countless submerged brushpiles located off the bank. It was totally different upriver as shallow cover became the main target for the anglers like Edwin Evers, who committed to that section of the lake (most of them fishing through a minefield of stumps).

While the southern end of Eufaula near the dam could accurately be described as “stained” during REDCREST, the waters north of the takeoff site at Lakepoint Resort State Park could best be described as “the color of chocolate milk”.

Anglers like Evers, Andy Morgan and Brent Chapman found success in the chocolate-colored waters north of launch with dirty-water favorites like bright-colored spinnerbaits with big thumping Colorado blades. Bright white and white/chartreuse vibrating jigs also accounted for fish, as did dark jigs and plastics pitched and flipped to shallow cover.

Closer to the dam, anglers mixed it up with power-fishing techniques, but the water clarity made it seem like they were fishing a totally different lake than the anglers fishing on the north end.

The topography of Lake Eufaula changes closer to the dam: The river widens considerably, which allows the lake to settle more and having less influx of runoff has made it much clearer.

Anglers still chunked spinnerbaits and vibrating jigs, but in more natural colors than their counterparts up north. They also found success on a handful of techniques that would seem unfathomable at the top of the lake: Throwing a shaky head on a spinning rod, fishing a swimbait with light line and casting a jerkbait around brushpiles

It was a tale of two ends of one lake at REDCREST – each produced fish throughout the competition. In the end, the lower-end bite won out as all 10 anglers in the Championship Round turned right out of the launch and headed south.