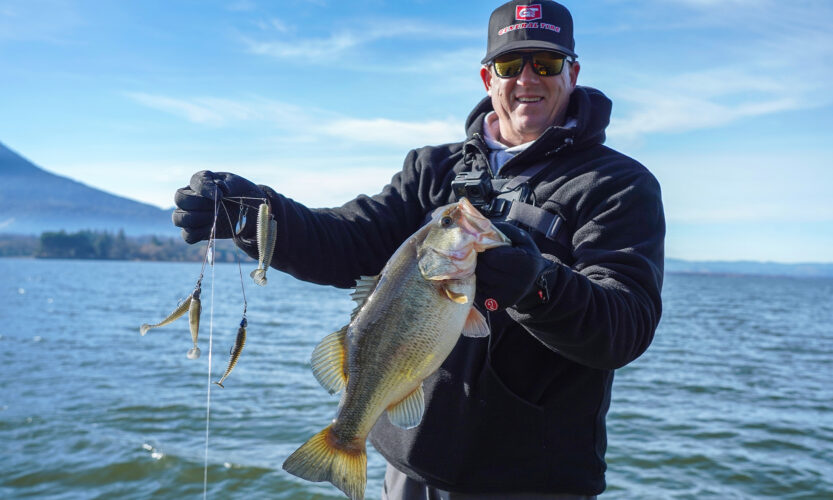 The Alabama rig has been a staple of many bass anglers’ arsenals for several years. However, since major tour-level events don’t allow the “A-rig” in competition, you don’t hear about it much from the anglers fishing the Bass Pro Tour.

“When the water is cold, they’ll crush an A-rig when they won’t hit anything else,” Reese says. “There’s something about that school of bait swimming by that makes them attack.”

Reese typically fishes the A-rig around the edges of brush and rock piles – “Brushpiles and big boulder rock cause you to snag a lot, I don’t throw the A-rig into the middle of that stuff,” he advises – and he’ll fish it both deep and shallow (from 4 to 30 feet).

“If I’m fishing deep-water lakes, like Folsom or Shasta here in California, I’ll cast to the deep water and retrieve it uphill,” Reese says. “That’s the best way to fish in deep water with this rig. The A-rig’s natural tendency is to rise up a bit on retrieve. Cast out and get the arc out of your line, start retrieving, let it fall back down, then climb it uphill. But you can also fish it shallower, over and next to cover. It’s a very versatile method.”

Reese’s favored cover for wintertime A-rig success is rock, which serves as a natural magnet when water is its coldest.

“You’re typically fishing in open water – breaklines, dropoffs, and isolated structure are the best areas to fish, whether it’s deep or shallow,” he advises. “Rocks, in particular, are more important than any other cover in cold water. They retain heat and attract baitfish, and bass always relate to baitfish. You’ll also find if you catch one bass, you’ll catch several in an area, since they school up during the cold-water months.”

The Right Gear and Setup

Reese will use heavier jig heads on the back and bottom of his A-rig spread to act as a keel, so the bait runs straight. The weights vary by the day, based on the depths he’s fishing, wind conditions, etc. Reese loads his A-rigs with a variety of Berkley Swimmers to entice bites.

“I typically use Berkley Power Swimmers from 2.8 up to the 4.3 size,” he says. “I may put a 5-inch Sick Fish as the back bait for a larger profile, but the bait in the center and back is always bigger than other ones. Some guys I know will throw all 5-inch baits and a 7-inch bait as the kicker. Those guys are trying to find just big fish.”

The beefiness of Reese’s A-rig tackle depends on the weight of the rig he’s throwing.

“I treat my swimbait setup just like everything else: If I’m using small baits with lighter jigs and light wire hooks, I’ll use a medium-action 7-foot, 6-inch rod,” he says. “You don’t want to overpower the lighter hooks when you set the hook. I’ll use an 8-foot heavy action rod for heavier heads and the bigger 5-inch baits. Those jigs have hooks almost as big as a flippin’ hook. You need the heavier rod to drive the hook properly. For the usual stuff, I throw a medium-heavy rod. Always pay attention to how much pressure and force you need to get a good hookset.”

Reese uses a 6.3:1 baitcaster for all of his A-rig fishing. Line choice is Berkley fluorocarbon in 15, 20, and 25 pounds, based on the size of baits used.

“For me, the 6.3:1 reel is best. I don’t like using the slower retrieve reels, the medium speed is perfect for this method,” he says. “Also, I rarely use braid for A-rigs. Since the early days of using them, everyone has thrown them on braid, but I’ve found I get a lot more bites using the fluoro. Plus, it sinks and braid floats.

“The sinking quality allows me to keep the bait deeper when I need to and still stay in contact with it. I still like setting the hook, that’s part of the excitement. With braid, you’d pull the bait out of their mouths. A little more stretch in the fluoro also acts as a bit of a shock absorber and you hook more fish and lose less.”

Time of day is still a factor for Alabama rig success in the winter. While the general school of thought is that the warmer part of the day is the best time to fish in the dead of winter, you shouldn’t sleep on the morning bite.

“People always think you need sunny and warm conditions to catch them, but even in winter, there can still be a really good morning bite,” Reese says. “Even though water is in the 40s or 50s, you can still miss a big fish bite if you’re not out at first light. Of course, the heat of the day from 2 p.m. until around 5 p.m. when water temps reach peak is also a good time to be fishing. A good general rule of thumb is, as long as you’re fishing, you’ve got a chance to catch them.”