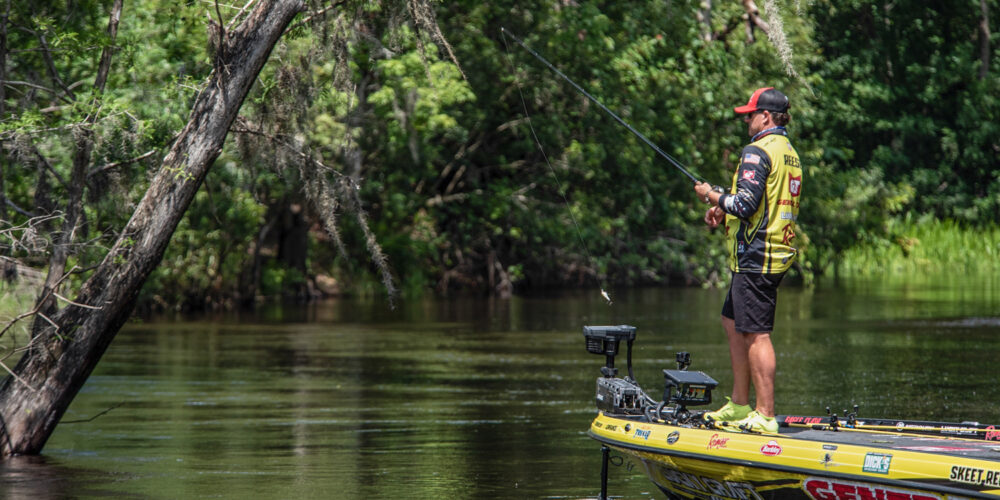 KISSIMMEE, Fla. – For much of the day Monday, the action on Day 2 of Toyota Heavy Hitters Presented by Venmo on the Kissimmee Chain of Lakes seemed slower the first day of competition just 24 hours earlier. But there was still plenty of excitement, including three anglers battling it out for the lead, a lightning-related weather delay and the first 9-pound bass of the week.

Instead of one angler running away with the lead like Zack Birge in Group A, the weights are much tighter in Group B, and it’s setting up to be a close race when the 40 anglers in the group return to action on Wednesday.

After the one-hour weather delay, the group returned with 20 minutes left to fish. Skeet Reese, Mark Rose, and David Walker all traded blows with last-minute catches, but Reese held on to win the round. Both Rose and Walker are one just big bite away from taking over the top spot when Group B gets back to work on Wednesday.

Once again, the midday and afternoon bite proved to be the most productive and that’s when the tournament’s biggest bass came as Rose landed a 9-pound, 2-ounce giant late in the day.

If that holds through Group B’s second Qualifying Round on Wednesday, he’ll walk away with $25,000. The big bass prizes increase to $50,000 for the Knockout Round and $100,000 for the Championship Round.

Reese Rides Strong Period 2 to Win the Round

After Period 1, Reese found himself stuck on zero. Then he went on a tear and put over 30 pounds of bass on the scales in one period alone. He ended the day with 12 bass for a day’s best 43-8.

Needless to say, he was happy with his adjustment.

“I had a hunch and an idea and called an audible after Period 1 and it paid off,” Reese said. “This is new territory for me on the Bass Pro Tour since I’ve never led a day. It feels really good.”

Most of his fish came from the same general area and looking ahead he plans to give that spot another shot.

“I think I can go back and catch a few, but it might not be enough to win. But, I think I can duplicate what I’m doing in some other places,” Reese shared.

Rose’s Giant Pushes Him to Second

Even without catching the biggest bass of the week so far, Rose would be sitting in a good position, but it greatly helped his cause. He totaled 11 bass for 38-9.

Like Reese, the last two periods were crucial to his day.

“It started really slow and I still don’t know what happened to my morning bite,” Rose said. “I went to some new water and cleared my head in Period 2 and the bite picked up and I got myself back into position.”

Walker tallied the most bass on the day with 13 and brought in 37-5 to settle in third. He’s thrilled with his performance, and eager for another day on the water.

“I’m as happy as you can be,” Walker said. “You always hope to start a tournament well, and when it happens, you have to appreciate it.”

The Tennessee pro is unsure if he can continue his pace and have a shot to win his group.

“I have no idea if I can do it again,” he admitted. “If I had known I would do so well there, I would have lost a lot of sleep last night.”

Group A will return to the water Tuesday, trying to advance to the Knockout Round. The weather forecast in the Kissimmee area is calling for a high of 91 degrees. There’s a 60 percent chance of rain along with light and variable winds.

Watch all three periods of competition during MLF NOW! live stream June 7-12 beginning at 6:45 a.m EST. Watch for free on MajorLeagueFishing.com, the MLF app or MyOutdoorTV. The General Tire Takeout show begins at approximately 3:00 p.m. EST after each day of competition.