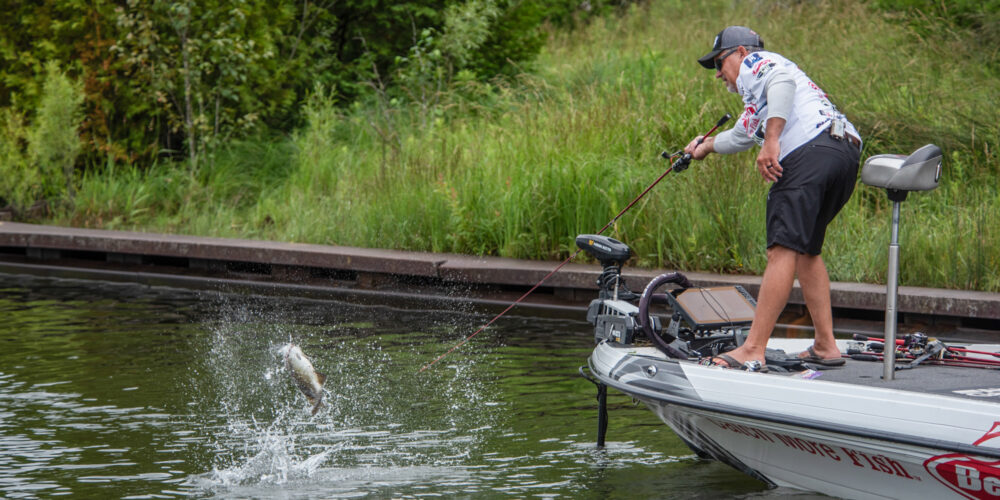 With the dog days of summer upon us and fall not far away, one hot topic still gives every angler the chills.

Scott Suggs grew wide-eyed over topwater lures at the first glimpse of his grandpa’s tackle trays. Later, those baits triggered a sense of fascination that hasn’t dimmed.

“It was always the excitement of seeing fish and seeing them attack the bait,” says the Alexander, Arkansas-based pro. “But the most important thing in the whole topwater deal is finding out when and why and where they want it.”

Starting at the Top

Where to start? Suggs disavows the idea that topwater baits should be reserved for lowlight conditions – cloudy days or early and late in the day.

“It may sound nuts, but where I live, between 10 a.m. and 3 p.m. is my favorite time to fish topwater in late summer and fall,” says Suggs. “That’s when bass really wolf pack. Your visibility is so much better during that time of day, too. You can see these fish, spot bait movement. Even if there’s no bass explosion, something spooked that bait.”

Suggs arms himself with four types of topwaters: a wake bait, a plopping bait, a popper, and a walking bait. He’ll cover a different stretch of water with a different style of bait until he can key in on the fish’s preference. “I want the fish to tell me what to throw,” he says.

If fish are active, wake baits and walking baits are his first choice.

“I want to cover as much water as fast as I can,” he says. “If I need to slow down, like working a section of river, then I let some type of popping or blooping bait I can work slowly do its thing.”

Wake baits factor frequently into his strategy this time of year.

“With lakes getting low as we near fall, you find shallow grass way back in creek arms, maybe rising to within two inches of the surface,” says Suggs, who became FLW’s “Million Dollar Man” at the 2007 Forrest Wood Cup on his home state’s Lake Ouachita. “When I want to cover water fast, I love to throw a wake bait like the Berkley WakeBull. You can fire it, burn it, do what you want, and it will still stay up top and wake.”

Suggs had a hand in the design of both the WakeBull and two other Berkley wake baits, the one-piece and jointed minnow-style Berkley Surge Shad lures.

“The broken tail (jointed) model has a rattle and wider wobble,” says Suggs. “It makes a bigger commotion on the surface. I throw it on windy lakes and cloudy conditions when I want to get the fish’s attention from a good ways off.”

For clearer water and calmer conditions, he opts for the one-piece Surge Shad.

“The straight one, the single piece, has a different action,” he says. “It’s lighter. The wobble is more subtle. There’s no rattle in it.”

He stresses the importance of a white underside to his wake baits.

“I’m a huge fanatic about that,” he says. No matter what color the sides are, I like snow white on the belly on all my Surge Shads, except for the chrome model, because it flashes so great and can be seen from a distance. When it rolls on its side, you can see the white. It gets more attention.”

Aggressive walking baits can call fish up from the depths.

“If I need to call bass up from 30 feet of water, I’ll throw a walking bait, something that really disturbs the water, that swishes and slams the water,” says Suggs, noting his preference for pencil-design walkers. “I’m old school. I really like those pencil popper-shaped baits. You can get a lot of erratic action yet only move that bait 5 feet. It stays in the strike zone longer with the most disturbance.”

It’s not unusual for walking baits to stir up the attention of bass positioned over brushpiles as deep as 35 or 40 feet, Suggs maintains.

“They stir up attention,” he says. “I always bomb the water over deep brushpiles to get those fish fired up. Whether I get a bite or I don’t, I still make a lap around the brushpile with that walking bait, then put a drop-shot down on them. Those fish are looking up from the top of the brush to see what’s going on. Then they see that drop-shot coming down, and you catch ‘em!”

Yeah, topwater fishing appeals to every bass angler. It’s the why, where and when that make for challenge.

And that’s just fine with Suggs.