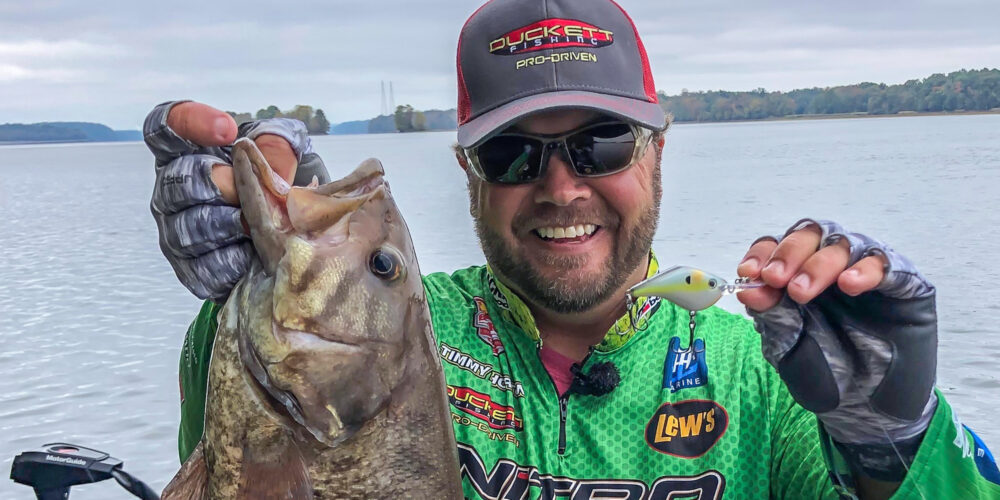 According to MLF pro Timmy Horton, shallow-water crankbait fishing is the way to go if you want to boat plenty of bass when the water starts to warm. You’ll not only catch a large volume of fish, but some of the biggest bass in your favorite fishery as well.

“Shallow water crankin’ is a tournament-tested method that’s produced many wins over the years, and it’s a lot of fun,” Horton says. “The water temperature starts to rise and the bass get active. They start coming to the banks, and you can cover a lot of water and catch them using crankbaits. For consistency at catching them in prespawn, it’s hard to beat a crankbait.”

Rising water temperature is the primary influence on fish moving shallow during spring, but make sure to pay attention to water clarity as well to find ideal cranking locations.

“For me, the first thing I look at is water clarity,” Horton says. “The more stained the water is, the shallower the bass will be. The second thing I analyze is how far along we are toward the spawn. The closer we are to stable 60-degree water temperatures, then we know the bass are going to be up shallower.

Horton suggests looking for rock first. Specifically, the last bit of rock leading toward spawning targets like water willows, buckbrush, etc. Rock is key because of the forage they offer the bass and crayfish.

“Bass key in on crayfish during this time, not as much on the shad,” Horton advises. “Crayfish are up shallow in the rocks. I prefer to find them in pockets and not creeks; creeks can get blown out due to incoming water. Work your crankbaits on the rocks and you’ll catch them.”

Horton has a few favorites for shallow cranking. First is the Azuma Square Boss. It’s a little heavier than a traditional 1.5 crankbait so you can cast it further, plus it suspends.

“I’ll bang that Square Boss around the cover, then stop it and get bit,” Horton says. “It’s perfect for laydowns, channel swings, any shallow cover. It’s the perfect blow-and-go bait.”

The next up in his arsenal is the Azuma Z Boss 6.

“This one is a phenomenal medium crank,” Horton says. “It’ll fish the last bit of depth in the pockets.”

Throw in an Azuma Z Boss 10 to fish some deeper staging areas to catch a few on their way into the really shallow stuff. Add an Azuma Claud Hopper Jr. when you need a small crank and a 7-foot 3-inch Timmy Horton Signature Duckett Rod in medium heavy action with a Lew’s BB1 Pro 6.4:1 reel loaded with Bass Pro Shops 12-pound XPS Fluorocarbon and you have his shallow crankbait basics.

Brighter reds and oranges are the primary colors to throw, along with some shad patterns. Add a little chartreuse and blue mixed in as well. Horton’s favorite Azuma colors are Spring Fling, Cherry Bomb, Grand Shad and Tennessee River.

“For me, shallow cranking is pattern fishing at its best,” Horton says. “You can find the right type of cover and repeat that all over, really getting dialed into the locations. The biggest fish in the lake will be up shallow this time of the year. They don’t like stuff in their grill that’s not supposed to be there. They’ll eat it.”