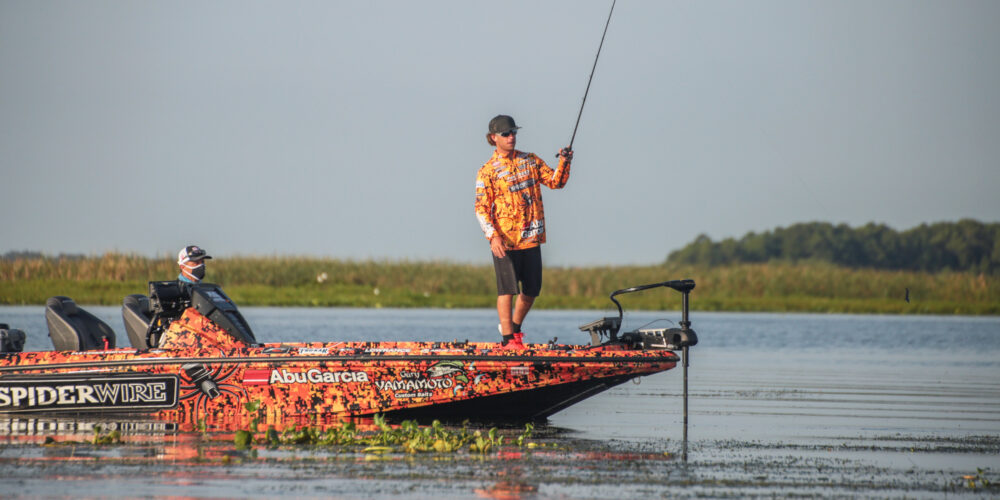 Florida is known for beaches, theme parks, citrus fruit, and big bass. It’s also the state where MLF Bass Pro Tour angler Fletcher Shryock loves to fish more than anywhere else in late winter and early spring, and where his favorite technique is one of the most effective.

Simplicity is one of the main reasons Shryock favors the Sunshine State. Where many anglers new to Florida tend to become overwhelmed by the sheer volume of fishy-looking cover, Shryock believes that getting back to basics applies to almost every Florida fishery he’s visited.

“There’s so much visible cover, and so many targets to fish – maybe that’s why some anglers don’t like it,” he says. “Maybe there’s too much to choose from and figure out. Being successful in Florida comes down to experience, and taking the time to learn about the different grasses, and how the fish relate to them and react when weather fronts move through. Fishing in Florida isn’t really different than anywhere else, except when you look at the cover, it all looks good.”

According to Shryock, embracing simplicity starts with techniques: “It’s generally some form of power fishing – fishing a swim jig, a vibrating jig, a topwater, a Senko, a worm or flipping. You’re pretty much covered (with those).”

While Shryock embraces all forms of power fishing, the Mercury pro is known for one technique in particular – flipping – and he’s not shy about how much he enjoys it.

“I fish any way that catches fish, but I love flipping,” Shryock confirms. “There can be a good ChatterBait bite and an okay flipping bite, and I’ll choose to capitalize on the flipping. I’m more comfortable with it. I understand it, and especially in Florida, I’ve capitalized on it. I haven’t won anything yet, but I’ve done really well.”

When Shryock was new to the pro game, he fished a standard broomstick flipping rod and braid, which translated into losing fish in shallow thick grass that Florida fisheries often have. He spent time with fellow flipping fiend Ish Monroe and gleaned much of his current flipping prowess watching and perfecting his own skills while observing the California pro.

“Ish taught me a lot,” Shryock admits. “I noticed the gear he’d use and how he’d land more fish. I started with the super stiff broomstick rod and braid, and it cost me. In my second tournament in Florida, I had the fish, but my execution of getting them in was awful. I’d hook into big fish and didn’t know what to do. I was so green.”

Shryock gradually evolved his gear, and now uses a flipping rod with a softer action. Still heavy, but not a broomstick. He feels the switch will help anyone land bigger bass in heavy, shallow grass.

“If I hook into a 7 pounder in 10 feet of water, they swim up and down fighting me, so you can take your time and wear them out,” Shryock says. “If they’re dirt shallow like they usually are in Florida, they only go sideways. A big fish ripping side to side comes off much easier with braid due to what you use it for: no stretch. To fix that problem, make sure you use a softer, parabolic-action rod. Since I’ve switched (from the broomstick), my catching percentage has gone way up.”

Shryock has a few Sunshine State favorites he feels any angler would have a good time fishing, especially in the late winter and spring.

“If I had to pick my favorites, I’d have to say Lake Okeechobee and the Headwaters near Fellsmere,” he says. “I’ve enjoyed all of the places I’ve fished in Florida, but I really love these two locations.”

Okeechobee is on most bass anglers’ to-do list, but Shryock likes it as much for its ever-change nature as he does for the size of its fish.

“What fascinates me about Okeechobee is that it’s always changing: the water levels, how much grass is killed off, where the new grass emerges from year to year,” he says. “It’s always a power-fishing lake, and there are several good areas on the lake, but that lake is always changing.”

The Headwaters Lake – technically Fellsmere Reservoir – is gaining fame thanks in part to MLF’s own JT Kenney promoting the heck out of the Palm Bay area, but Shryock had a little magical moment there a few years back before it started to get so much attention.

“If you like power fishing, classic Florida bass fishing, you need to get to Fellsmere and the Palm Bay area to fish the Headwaters lakes,” Shryock says “I got to fish there my brother and Jordan Lee. Jordan caught a 10-pounder and we caught tons of big bass. It was freaking awesome. That’s one of the places to go for sure in Florida.”