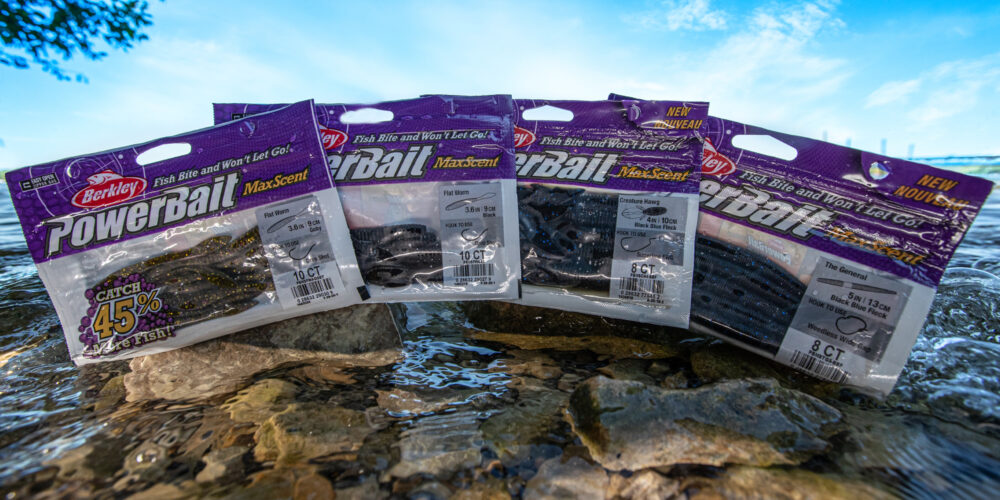 STURGEON BAY, Wis. – The Berkley pro staff contingent competing in this week’s Bass Pro Tour Covercraft Stage Five Presented by Abu Garcia is impressive. Berkley’s large staff includes some of the most decorated anglers in the field, but they’re skewed this week.

As in, skewed toward the top.

One-quarter of the 40-angler field in the Knockout Round are Berkley pros, as is Justin Lucas, who set three MLF records on his way to an astounding 205 pounds, 6 ounces in two days and is already in the Championship Round.

The common denominator is that they’re all relying on Berkley PowerBait MaxScent plastics, notably the Flat Worm. While MLF NOW! was streaming the first three days of Stage Five, the colors the anglers were using – most notably Brown Back and Black – quickly went from “in stock” to “backorder” on popular online tackle websites.

This astounding performance of MaxScent in this smallmouth Mecca was a long time coming after years of scientific research and input from Berkley’s anglers.

The Science Behind It

Pure Fishing’s John Prochnow has worked as a Berkley chemist since 1986, and has been helping anglers catch more fish through science since he started with the company. He now holds the title of R&D Director and enjoys the science behind fishing as much as he does testing it on the water.

In the early days, Prochnow was the chemistry arm to the biology knowledge of Berkley’s fisheries biologist, Dr. Keith Jones. The two worked together researching science-driven ways to make the best baits possible.

“We do thousands of tests in the lab and then go out into the field and fish. It’s amazing how close the tests can be,” Prochnow said.

Berkley’s lab work includes testing every ingredient added to their baits to prevent any adverse biological effects. One of their first breakthroughs was the Berkley PowerBait Power Worm in the late ’80s and then GULP! in the early 2000s.

Prochnow describes MaxScent as a perfect union of those two products.

“GULP! was a real challenge because it tended to dry up, but it worked great,” he said. “MaxScent diffuses scent just as well as GULP! did, but also has the flexibility and durability of our PowerBait plastics.”

MaxScent was first released at ICAST 2016 and has become a favorite due to how quickly it disperses scent.

The team at Berkley has put in hours of work in the lab to create a perfect soft plastic and the smallmouth bass on Sturgeon Bay sure seem to like it.

“Each species of fish prefer different things, whether it’s bass, walleye or saltwater, and smallmouth bass, in particular, seem to be more scent-oriented than largemouth,” Prochnow said. “The active ingredients (in MaxScent) are right in their wheelhouse.”

In addition to conducting tests, Berkley leans heavily on their team of pro anglers when designing products.

“The team works directly with the pros on shapes of lures and even down to the colors,” Prochnow said. “They want the color shades to be exactly to their specifications and sometimes, we have to modify the formulations to get the colors exactly how they want it.”

Lucas estimates that the Berkley pro/research team went through eight to 10 design variations before the Flat Worm was deemed just right.

“The Flat Worm was made specifically for a drop-shot rig and we had to have it the perfect thickness for the right action,” Lucas said. “And the science is legit. You can’t say it’s a gimmick when the Top 3 guys in a round are all Berkley pros. There’s not a better drop-shot bait right now.”