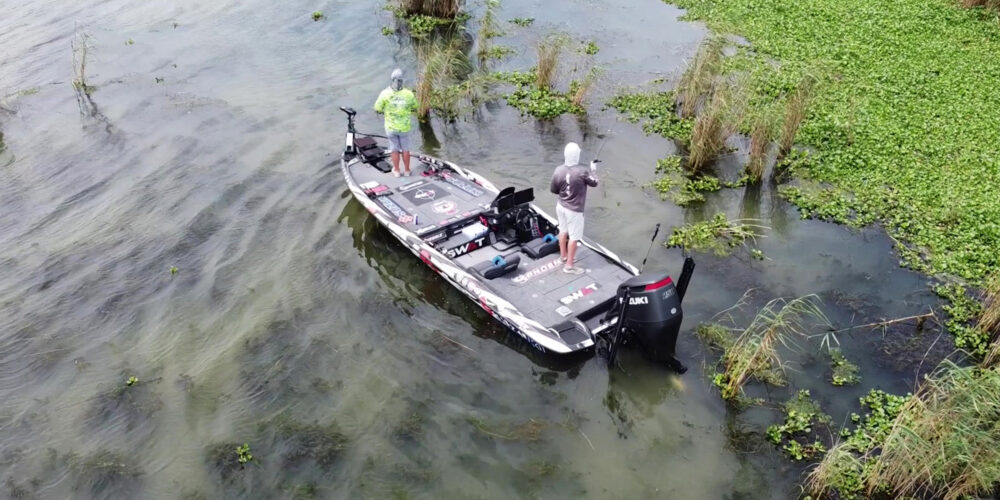 Gerald Spohrer looks forward to fall fishing on his home waters in the Louisiana Delta.

“Now until spring is the favorite time for fishermen down here because it’s not so hot and water levels are dropping,” says the MLF pro from Gonzales, Louisiana. “You can fish more banks and tributaries, and you just seem to have a lot more options.”

The rivers flowing into the Mississippi River’s famed delta in his home state have “high volatility” through the warm months, when they’re saturated with rains and flooding from storms and hurricanes. That changes with the progression of fall.

“Conditions get more stable,” says Spohrer whose favorite water is near Venice, Louisiana. “The water gets clearer. Water color starts to get right. The current isn’t running 90 miles per hour. Conditions allow you to fish the laydowns and wing dams and current breaks that weren’t fishable before. It just gives you more opportunity.”

Bass anglers fish the delta for its spectacular numbers from fall to early spring. Catching 100 fish is common, and a 200-fish day is not unusual.

The primary cover for largemouth in the lower Venice area is what Spohrer calls “rosocane,” sometimes referred to as “river cane.” It’s a pulpy emergent plant that appears in small bamboo-like strands along shorelines.

“Fish get inside of the cane or relate to its edge depending on how thick the edge is,” Spohrer says. “They use it as a current break.”

The flow of a rising tide pushes water into the cane growth, and a falling tide current pulls it out.

Spohrer spends 90 percent of his delta angling time flipping and pitching to the cane. It’s an art with special requirements dictated by the toughness of the plant and its tightly packed configurations.

The D Bomb has two key traits: 1) it resembles in size and configuration the kind of crawfish that delta bass choke up repeatedly in angler livewells, and 2) its plastic is thick enough to withstand aggressive casts into thick stands of cane without exposing the hook point and locking into the wood-like cane stalks.

“You need a bait with enough meat and strong enough plastic so the hook doesn’t pop out when it’s forced through the cane,” says Spohrer.

Although rosocane is dominant in the delta, Spohrer notes that it grows considerably farther up the Mississippi River system. Outside the delta, condensed stretches of cane often go unnoticed by anglers unfamiliar with the plant and how to fish it. He recalls tournament success fishing cane on the Arkansas River.

“Flipping cane is different than other flipping,” explains Spohrer, who looks for growth in at least a foot or two of water. “Instead of laying your bait in quietly, you’re violently pitching into the cane. You want that bait to ricochet off cane and get back in there. The cane is tough. It rejects a subtle flip or pitch. You have to beat through three or more pieces of cane to get deeper into the bed, because a lot of times that is where you get the bite.”

Irregularities in the cane act as current breaks.

“You may see where the cane sticks out in one spot and see a slight seam with current,” he says. “Those little irregularities of current will guarantee a bite. Any pocket, point, patch of grass or other stuff that sticks against the cane, such as water hyacinth, makes a good target, too.”

Cane flipping is a speed game. The fish are usually in a feeding mood. The cover is thick; the bites aggressive.

“I cover a lot of water,” says Spohrer. “I’m real close to the bank, almost on top of them. I’ll bounce my bait once or twice, then I’ll reel in and flip or pitch it again. The more flips I can make to an area, the more bites I can get. It’s never worth it to sit and bounce the bait eight or 10 times to coax a fish to bite. I work fast…flip, then flip a foot or two over until I hit a fish on the head and he bites it. You have to work efficiently.”

Another adaptation for flipping cane is a 7-0 flipping stick, 6 inches shorter than the 7-6 rod that many regard as the current standard for the technique. His is an Alpha Angler Zilla. The “up close and personal” approach he takes to cane bass places a premium on the quicker hookset the shorter rod delivers in tight quarters.

He mounts a high-speed 8:1 Quantum Smoke reel on the shorter rod to accelerate the action.

Also in the service of efficiency, Spohrer flips with his left hand and reels with his right to reduce wasted effort and the chance of missing a fish during the transfer of rod from hand to hand.