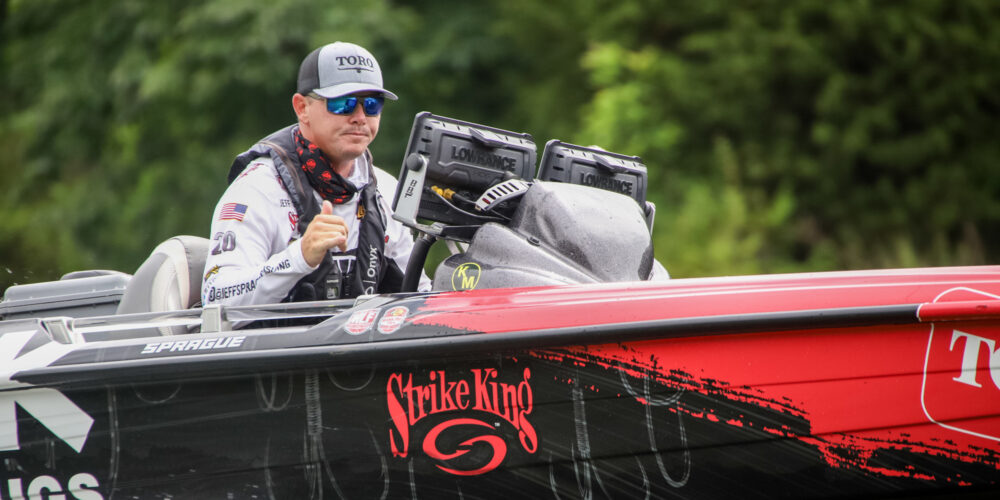 The lipless crankbait has been a staple in bass anglers’ arsenals for decades for a reason: it catches bass in diverse water types and in all four seasons. And while lipless cranks can be fished effectively in many different situations, the winter months – when fish gravitate to any vegetation remaining in lakes – is one of the times that these baits excel.

Texas pro Jeff Sprague leans heavily on lipless baits in the fall and winter thanks to a lifetime of experience on Lone Star State fisheries, including a legendary lipless lake with a red hue named after it: Sam Rayburn Reservoir.

“Fishing a lipless is a year-round deal, but it shines when the water cools off,” Sprague confirms.

When and Where to “Yo-Yo” a Lipless

One deadly technique for fishing a lipless crankbait is to fish with a “yo-yo” retrieve as the bait ticks the grass and is then ripped free by the angler and allowed to free fall on a slack line.

“I’ll start to ‘yo-yo’ a lipless as early as late fall when the baitfish come in the creeks and get on the flats, and then fish it all winter long,” Sprague says. “It’s best for me when the water is in the low 50s and even down into the 40s because the bait has such a tight wobble and the fish have no choice but to react when you rip it from the grass.”

Sprague looks for grass edges and any remaining green grass he can find, which is one of the most critical components to this technique.

“When the water cools, some of the grass dies, but there’s almost always some that stays green and keeps producing oxygen,” Sprague advises. “The best way to find the good green grass is just fishing, and observing the grass you get on your trebles. You may still catch a few if you notice it’s brown or dead looking, but you won’t get as many bites.”

Once he locates good grass, Sprague gets to work on the edges.

“I start by fishing (a lipless) high in the water column – I keep my rod tip high, around the 10 o’clock position, and let the bait sink down and start reeling until I get the bait to run and tick the top of the grass,” Sprague says. “When you get into the thicker stuff, it’ll load up your rod. Then I’ll give it a good solid rip and break it free from the grass and the bait will ‘yo-yo’ down on a slack line. The majority of the time, that’s where they’ll eat it because it is like a fish or crawfish getting away from them.”

Lipless crankbaits are all pretty similar, but there are subtle differences in their wobbles, sound, and vibration. Sprague prefers the Strike King Red Eye Shad in both the standard and Tungsten 2 Tap versions.

“I like the 2 Tap late in the year because of the unique sound,” he says. “It has a clacking sound instead of a rattle and to me, it sounds just like a crawfish that slaps its tail to its body as it swims away from a predator.”

Sprague will also fish the standard version and says a ½-ounce model is always his starting point, switching to smaller and larger versions depending on the situation.

“It all depends on the size of the baitfish and crawfish,” he says. “I’ll go up to a ¾-ounce if the bait is big and I don’t have a problem going down to a ¼-ounce bait if needed. You need to play with it a little bit, that’s just a starting point. Nothing works better than experimenting with a rod in your hands.”

“Reds are great early in the year, and I go with darker colors during the winter,” he says. “I also mix in shad colors in the summer and fall. That’s what’s great about a lipless crankbait: it can mimic both shad and crawfish.”

Yo-yoing and ripping a lipless crankbait effectively requires the correct rod, reel and line. Sprague’s preference is a 7-foot to 7-3 medium heavy rod with a softer tip, but still enough backbone to rip the bait free from the grass.

“The bait has trebles all over, so you don’t need a stiff rod for the hookset; they hook themselves for the most part,” he says. “I always use a 7.5:1 Lew’s HyperMag reel so I can pull up line in a hurry if one hits it on slack line after I rip it free from the grass.”

“That rod is a great all-around rod for a bunch of techniques and makes a great offshore lipless rod,” Sprague says. “I know some guys like braid and some like monofilament for the technique, but 15-pound fluorocarbon works great for me. The heavier line will cause it to ride much higher in the water column and 15-pound seems to be a perfect balance.”