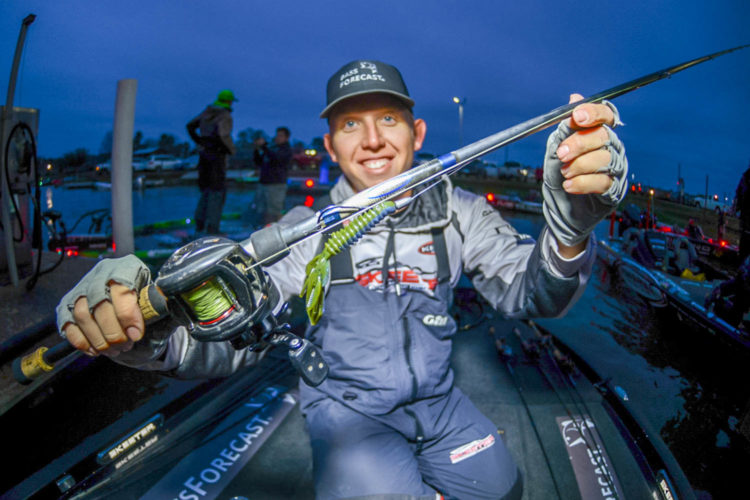 Alton Jones, Jr. is looking forward to competing against his dad in the Knockout Round. Photo by Garrick Dixon
February 16, 2019 • Mason Prince • Bass Pro Tour

CONROE, Texas – Family matters, but not necessarily during the Knockout Round of the MLF Bass Pro Tour Huk Stage Two presented by Favorite Fishing.

The Top 40 anglers are set to do battle on Saturday where only the top 10 advance to Sunday’s Championship Round. However, for eight of those 40 anglers they will not only be trying to beat their fellow anglers, but also their own blood.

Four different MLF families – brothers Matt and Jordan Lee, brothers Chris and Bobby Lane, father and son Alton Jones and Alton Jones, Jr., and uncle and nephew Kevin VanDam and Jonathon VanDam – will all compete against each other. Some are fishing for pride.

“I don’t necessarily try to beat him or any specific angler, but to say there’s not bragging rights on the line would be a lie,” said Alton Jones, Jr. “Beating him would make it a little bit sweeter.”

“Junior” wishes his dad well in every round, even for Saturday, but that doesn’t mean his competitive side still won’t show.

“If there’s one guy that I would hate to get bumped out of the Top 10 by it would be my dad,” Jones admitted.

The Lane brothers are famous on tour for their wagers with each other. Of course, there’s an MLF check to fight for, but a little extra motivation never hurt.

Kevin and Jonathon VanDam were up against each other during the Knockout and Elimination Rounds in Stage One and Two, but this will be the first time they’re both competing for a Top 10 spot. There doesn’t really seem to be a rivalry in the VanDam family, just mutual wishes of good luck.

“We’re really close,” Kevin VanDam said. “We stay together on the road and we travel together. I’ve always rooted for him and I hope he’s rooting for me.”

When all is said and done, Kevin wants to see a great day from both members of the VanDam family.

“There would be nothing better than the VanDam name to be up there at No. 1 and No. 2 at the top,” VanDam said. “That’s the ultimate goal.”

Watch Saturday’s Elimination Round on MLF NOW! beginning at 10 a.m. CT on MajorLeagueFishing.com and the MLF app. The Top 40 anglers compete for 10 spots and the right to compete in Sunday’s Championship Round.