Summer School(s) are Still in Session 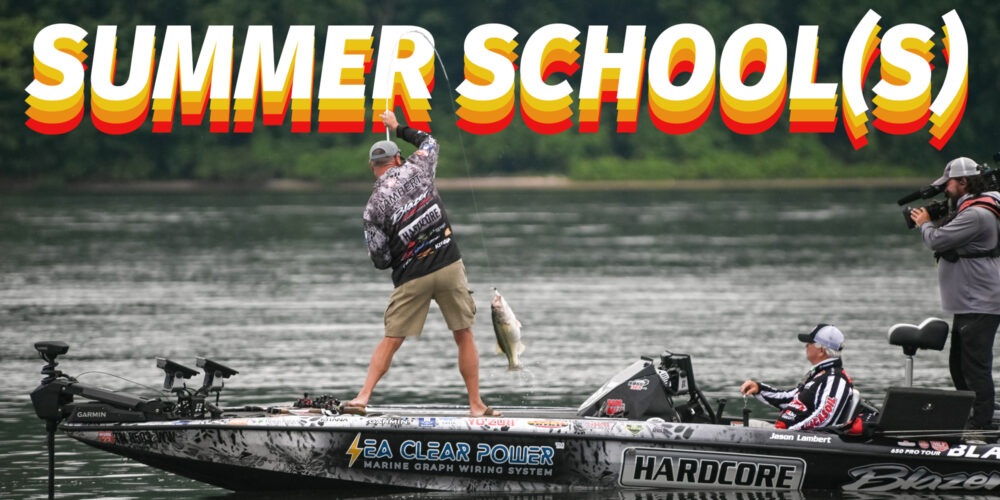 Unlike your sons and daughters, bass seem to love summer schools.

After their postspawn recovery, bass of all species school up gradually. On impoundments graced with large populations of schooling baitfish like blueback herring and various shad species, schooling habits can lead to some of the most exciting fishing of the year, ranging from giant largemouth slamming swimbaits on deep structure to schools of spotted bass cooking up a baitfish boil at the surface.

Electronics have added depth and dimension to our understanding. Side- and forward-scanning capabilities enable us to pinpoint structure and observe both bass and baitfish activity in real time and with increasingly lifelike clarity.

Here’s what five MLF pros have learned from the schooling experience, and how they’ve managed to convert those discoveries into hooked fish.

From Wolf Packs to Hungry Schools

Summer schooling starts to gain momentum in July on Anthony Gagliardi’s home waters in the Southeast. Threadfin shad and blueback herring are buffet favorites for largemouth on Lake Murray and the largemouth and spotted bass populations of Hartwell, Russell and the Savannah River impoundments.

“The fish group in small wolf packs initially. Those fish tend to move, and the action is sporadic,” says Gagliardi, whose resume includes both a Forrest Wood Cup (2014) and FLW Tour Angler of the Year (2006) award. “But as the season enters August and fall, the fish group up more. They relate to breaks and suspend over brush and cane piles and become more accessible.”

“Spotted bass can navigate the water column from 50 feet to the surface way better than largemouth,” Gagliardi says. “They can work the depths better. They don’t seem to mind the pressure changes as much as the largemouth, which tends to suspend closer to the surface.”

Electronics have opened his underwater eyes to bass behavior in ways seldom imagined before.

“The Garmin LiveScope has taught me a lot in a short amount of time about how fish gather on these spots and how active they can be,” Gagliardi explains. “I don’t waste as much time now on inactive fish. Before, you had to rely on the bite for much of your information. With LiveScope, you see fish respond whether or not you get a bite.  It has taught me a ton.”

On Table Rock Lake, he watched groups of bass follow his bait to the boat before retreating to a location 40 feet or more from where they were initially.

“The LiveScope showed that,” Gagliardi says. “It allows you to make the precise cast to the school as often as possible, which is important because once you’ve disturbed a school and pulled them off the spot where they’ve set up, they’re harder to catch. If they’re relating to a brushpile, they sit motionless a lot. If a school of shad passes overhead, they break and feed. When they’re done chasing, they hunker back down close to where they were, but not necessarily in the same place.”

“I’ve seen bass herding threadfin one minute, then coming up again 10 minutes later to herd herring,” he says. “They probably prefer herring, but they aren’t going to discriminate if a ball of shad comes by.”

When bass are feasting on high-riding baitfish, Gagliardi opts for topwater walking baits like the Berkley Cane Walker or J-Walker or a Berkley PowerBait Jerk Shad fished close to the surface.

“All my presentations are fast,” he says.

He bases his bait selection and approach on what his electronics tell him.

“The 10- to 12-foot zone is the transition line,” Gagliardi adds. “Below that, bass aren’t going to come up for a topwater lure. If they’re deeper, I’ll likely go after them with a drop-shot rigged with a Berkley PowerBait Bottom Hopper or another straight tail worm.”

Mark Rose learned ledge bass behavior on the fabled Tennessee River reservoirs. Bass, he noted, ease out to key locations following their postspawn recovery. And they aren’t necessarily in a hurry.

“They gather on bars and river ledges. Every day more and more fish gang up,” says the FLW 2018 Tour Angler of the Year from Wynne, Arkansas. “They sit in eddies, on breaks in the river channels, on stumps and gravel bars.”

The schooling reminds him of a fall waterfowl gathering.

“They’re kind of like ducks,” Rose explains. “You put out decoys and five or six ducks come. If you don’t mess with them, more keep coming. But once you start to catch some, they — like ducks — start to split up.”

“But for those tournament-winning fish on the Tennessee River, the primary forage is gizzard shad,” Rose asserts.

Gizzard are the magnum members of the shad clan, and Rose mimics them with lures like the 5.5-inch Strike King Sexy Spoon matched to bait size or a Strike King Pro-Model crankbait matched to depth.

“Another favorite is a 3/4- or 1-ounce football jig trailed with a Strike King Rage Craw,” he says. “When fish don’t seem to be hitting the football jig but I feel they are in the area, I won’t leave without snapping the jig a few times or lifting the jig high and letting it fall. Time and time again, hopping it high off the bottom is how they want it. They eat it on the way down.”

Rounding out Rose’s offerings to ledge schoolers are 5- to 6-inch swimbaits on a heavy Squadron Jighead or Scrounger head, a swinghead jig with a Strike King Rage Bug and an 8-inch Strike King Bullworm.

“I also like a 3/4-ounce white bucktail hair jig,” he adds. “Just hold the rod at about the 10 o’clock position and reel fast three times. Don’t drop the rod. Just let the jig pendulum down on a slack line.”

In summertime, bass really hunker down in the piles waiting for herring to pass over them. In the early morning or at night, they might school anywhere, but after that, the key is pretty much brush or cane piles.

Spotted Bass and the Offshore Life

Lanier, Smith and Hartwell lakes are known for their strong spotted bass/blueback herring connection. Unlocking their secrets has added to Cody Meyer’s reputation as one of fishing’s foremost authorities on spotted bass.

“Spotted bass really live offshore the whole time,” says Meyer, whose catch list of oversized California spots has buttressed his reputation. “They can school 200 or 300 feet from structure, or just 50 feet. But when it comes to spots feeding on herring, the best schooling action is over structure, over those brushpiles and cane piles made from bamboo.”

Meyer hunts for prime structure in practice, making sure he can pinpoint their location come tournament time.

“Your first cast over brushpiles is crucial,” he says, stressing his reliance on his Garmin electronics. “If a cast is too far from the piles, it’ll pull fish off the piles and they will scatter. It’ll take a while for them to regroup. With LiveScope, I know exactly where the pile is, and I can bring the bait directly over it. That’s a big deal. In summertime, bass really hunker down in the piles waiting for herring to pass over them. In the early morning or at night, they might school anywhere, but after that, the key is pretty much brush or cane piles.”

“On herring lakes, you can catch fish on topwater baits all day,” Meyer says. “Herring really gravitate to that high sun.  On overcast summer days, it’s harder to catch them on top.”

He approaches spotted bass differently on lakes without bluebacks, singling out Oroville and Shasta in California.

“Those fish tend not to get on structure as much,” Meyer says. “You may find a point or an offshore island a good place to start, but spotted bass on these lakes are more nomadic.”

His favorite topwater lures are the Evergreen Shower Blow (SB) 125, a pencil popper-style bait, and the Evergreen Justine (JT), a stealthy rattle-free walk-the-dog bait. A clear-bodied version of the Evergreen One’s Bug is another favorite.

“I always have a topwater on deck when I’m fishing a spotted bass lake, just in case they come up schooling,” Meyer admits. “Even if I’m drop-shotting brush piles.”

Think ‘Small’ for the Fall Transition

Troy Morrow has learned to think “small” as summer bends into fall. Adjusting to a late-season menu shift from blueback herring to threadfin shad earns him extra bites.

“Bass start to transition to a more open-water bite in fall,” says Morrow, who makes his home in Eastanollee, Georgia. “Most of the fish transition from herring to a diet of small threadfin shad. They take quantity over quality. You just have to downsize your bait going into fall.”

“Blueback is a colder-water fish, so it can get elusive in late summer,” Morrow says. “That’s why bass then lean more toward threadfin shad, a smaller bait. They’re more available during that summer-to-fall transition. Threadfin like hot water and will be up in the water column. Bluebacks are deep then, seldom near the surface.”

He recalls a late-season bite on Clark’s Hill when schooling bass were gorging on tiny threadfin. Baits the size of your thumbnail can be hard to cast. Morrow answers that challenge with his own little trick.

“I can take a bait like a Heddon Super Spook Junior – a decent-sized little bait – but go to a clear version of it with a feather (treble hook) on the end,” he says. “It still looks like that smaller bait because all they really see is that little feather.”

Most of the fish transition from herring to a diet of small threadfin shad. They take quantity over quality. You just have to downsize your bait going into fall.

The Key is the Cast

The pro from Michie, Tennessee, prides himself on his ability to locate prime structure on main river and secondary channels. He claims to have identified 27 groups of bass during practice for the June Bass Pro Tour event on Lake Chickamauga.

“Current is a big factor on the Tennessee River (ledges),” he says. “Bass are sitting in one spot in giant schools, in ambush positions where there’s a current break, waiting for bait to come to them. When it happens, it’s a feeding frenzy.”

Creek intersections with the main river channel, island heads, channel bends and other elements comprise prime schooling structure. Depths at these locations can vary from 10 feet to more than 30 feet.

Ledge bass are shad eaters, chowing down on threadfin or the larger gizzard shad. Lambert carefully scouts prospective hot spots with his electronics, making the most of features like SideVu and ClearVu.

“We see things now as we haven’t seen them before,” he says. “The fish don’t have a place to hide.”

His detailed observations have enabled him to refine his approach to offshore bass.

“I honestly hardly ever stop to fish for ledge bass unless they’re sitting a certain way,” he explains. “I want them to be in contact with the bottom and in what we call ‘attack formation’ — linked to the bottom, aligned with the current. The fish tell you pretty quickly how to catch them. It isn’t always the same bait, but it is always the same cast. Once they start biting, you have to replicate that cast over and over because they want that bait coming in the same direction.”

A bass’ predatory nature stokes its competitive fire. The sight of one bass feeding goads others to follow – a habit that can break up a school. Bass may move several hundred yards in a day and shift to structure at a different depth.

“On Chickamauga, I caught fish in the morning at 24 feet, then caught them in the afternoon at 32 feet,” he says.

How do you keep from pulling bass off structure?

“There’s something I do a little different from everybody else,” he deadpans. “But that’s one thing I’d rather not talk about.”