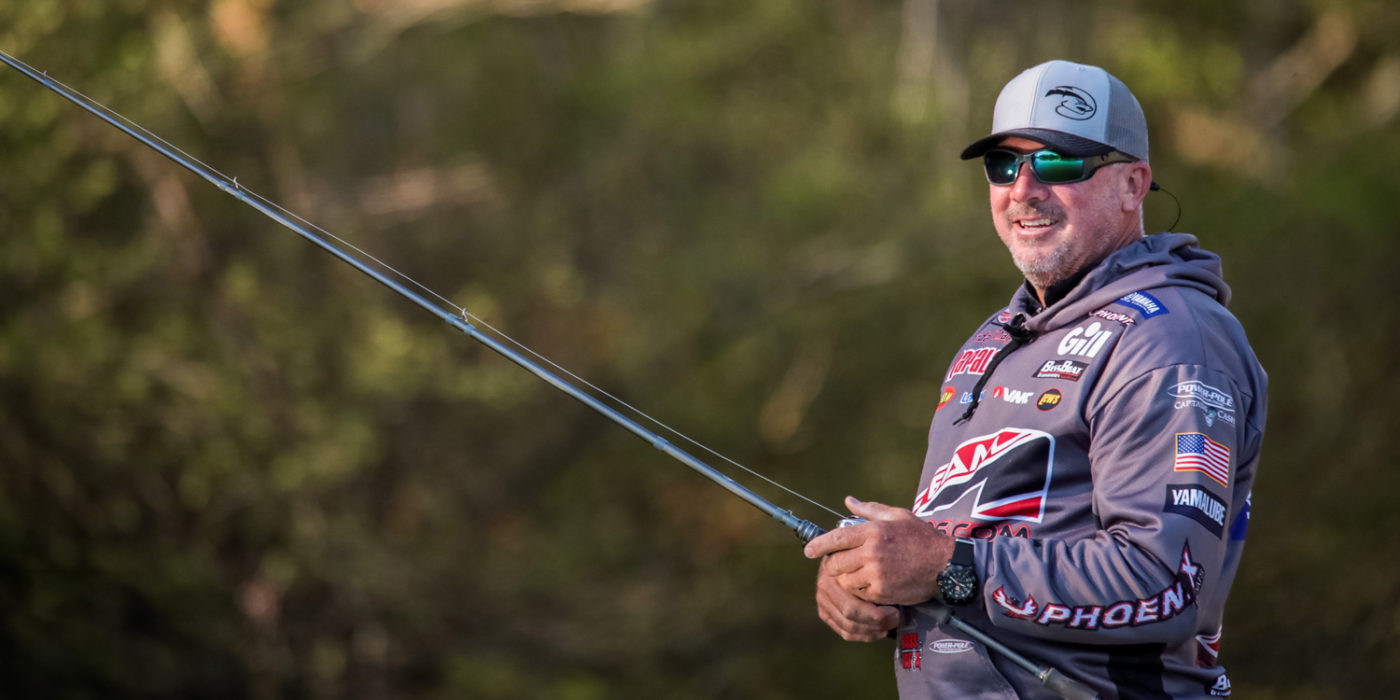 Randall Tharp finished his day in 16th place after Shotgun Round 1. Photo by Josh Gassmann

BRANSON, Mo. – In the first period of Friday’s Shotgun Round of the Berkley Stage Six Presented by TrueTimber, Randall Tharp landed a 4-pound, 6-ounce largemouth. After he weighed in his catch and released it back into Table Rock Lake, Tharp said, “I don’t know what it is about these Ozark lakes, but nothing catches big fish here like a jig.”

When he got off the water after a 16th-place finish in his Shotgun Round, I asked Tharp why he thinks a jig is so successful in southwest Missouri.

“These lakes are all just full of big rocks, and that’s what crawfish like to live around,” Tharp explained. “I’ll never forget when I saw Denny Brauer do a seminar when I first started fishing and he said, ‘A bass will swim through a school of shad to eat a crawfish.’ Ever since I heard that it’s kind of stuck with me my whole career. I think these fish see a lot of jigs, but they don’t see a lot of really big jigs and that’s what a big fish wants to eat. That’s what I’m looking for is big fish and I never go fishing without a big jig with a big chunk on it.”

Tharp was able to boat 20 of his 28 fish thanks to that jig he was throwing all day. The Florida pro caught a couple of 4-pounders and a 3-pounder to push his weight total to 53-15. While he wanted to finish better than 16th place, Tharp is looking forward to getting back out on Table Rock come Sunday morning.

“I have a lot of water I didn’t cover today and you don’t really know what you’re on until this thing starts,” Tharp detailed. “I had enough bites to be doing way better than a 16th place but these fish are in some really thick stuff and you just lose the battle sometimes.”

Tharp has had some success with Ozark Mountain lakes in the past, taking home an Elite Series win at Bull Shoals Lake in 2016. While he can’t quite put his finger on why he has performed so well in this area of the country, he ventured an educated guess.

“I think I just do well this time of year in this area,” Tharp said of late spring in the Ozarks. “The water level is up right now and dropping, and I factored that into my gameplan. The areas that I’m fishing and the fish that I’m catching aren’t getting any pressure. I literally put my trolling motor down and fished for 3 miles today. I was just fishing everything that was in front of me and it worked out today. I don’t know if I can duplicate that on Sunday but I’ll just have to feel it out.”

As he prepares for Sunday’s Elimination Round, he finds himself just 6-14 ahead of the Elimination Line. The way the rest of the competition was catching them Friday, Tharp is well aware of how many fish he needs to catch to move on to the Knockout Round. Still, it doesn’t matter if you’re in first or 20th place, all that matters is making that Top 20.

“It could be a lot worse. I’m in the hunt,” Tharp said simply. “Some of these guys are going to have to have 80-pound days on Sunday to make the cut so I’m thankful to be in 16th place. It’s hard for me to dial in because I thought some fish were spawning, now I’m not sure if they just live there are they’re feeding. I got a little lucky sometimes today but we’ll see if that continues.”

Tharp and the rest of Group A will have the day off on Saturday as Group B fishes their Shotgun Round on Table Rock Lake. Coverage begins when lines go in the water at 6:30 a.m. CT Saturday morning with SCORETRACKER®. The MLF NOW! live stream starts at 9 a.m. CT on MajorLeagueFishing.com.